But at the top of this Taratamya is a list of 200 gods, known as the Ruju Ganas. You can see a list of the top 100 out of the 200 here. Of these the top three names are Brahma, Vayu, and Latavya. The current Latavya becomes the next Vayu, the current Vayu becomes the next Brahma, and the current Brahma attains Moksha. But my question is, who is Latavya?

All I know about him is that Madhwas believe that the 15th century Madhwa philosopher Vadiraja Tirtha was an incarnation of Latavya. But do either Madhwa works or Hindu scriptures provide any further information about him? Like what is his story, and what is his function in the Universe?

Thanks for bringing this. Not sure this answer suffice your question. 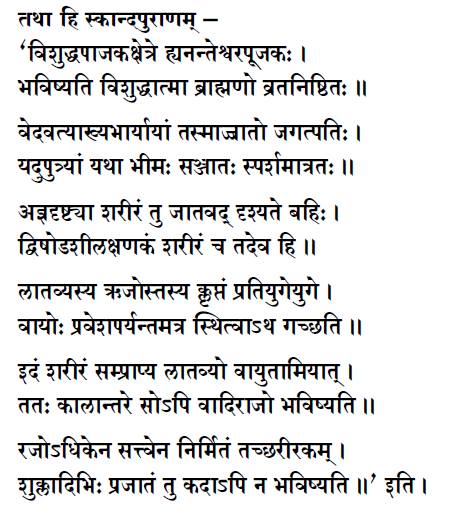 There are some good sources that quotes lot of praManas about Sri Vadiraja.

Not the answer you're looking for? Browse other questions tagged vaishnavism dvaita madhvacharya madhwa .

1
According to Dvaita philosophy, why is Paramatma worshiped?
1
According to Dvaita philosophy, is Vishnu the only God?
1
How do Dvaitins interpret the Brahma Sutras where it says Brahman is the material cause of the universe?
3
Does the Saura Purana foretell the appearance of Madhvacharya?
2
What exactly is Abhinava Anyatha Khyati of Madhwas?
1
What are the views of Shri Chaitanya Mahaprabhu regarding Dvaita of Shri Madhwacharya?