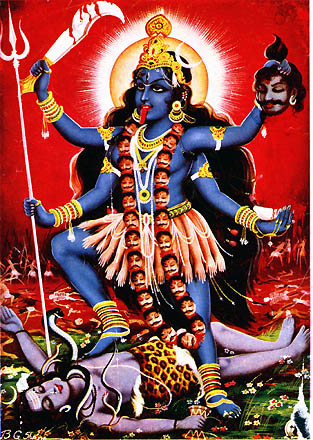 A small and tiny description of Maa Kali (Adi-Shakti).

3-6. I am the five elements as also what is different from them. I am the entire world. I am the Veda as well as what is different from it. I am the unborn; I am the born. Below and above and around am I. I move with Rudras and Vasus, with Adityas and Visvedevas. Mitra and Varuna, Indra and Agni, I support, and the two Asvins. I uphold Soma, Tvastir, Pusan and Bhaga, The wide-stepping Vishnu, Brahma, Prajapati. To the zealous sacrificer offering oblation And pressing the Soma-juice do I grant wealth; I am the state, the Bringer of Wealth; Above it all, place I its protector. (Devi Upanishad).

So, basically She is the ehole Universe and every single thing is inside her only.

I don't think any tailor has the capacity to sew or made cloth for the whole universes or even can gather that amount of cloth material.

And What morality level.? Every one comes naked in this world and after death also goes naked only leaving all the belongings.

Every thing is her only, so why she has to be shy of herself.

I hope this clarifies your queries.

She is Maa Kali, the eternal mother! Remember she is mother of whole humankind. So, When a son or daughter looks at his or her naked mother or a child sucks milk out of bosom of a mother, does it question morality? Ask yourself. She appears as nude woman only to those whose perception is bound by AGYANA. So what matters is the perception here. Look at her like a mother n feel like her child then such questions will never arise in your mind.

Maa Kali manifested herself in that form to help Ma Durga to kill a demon named Rakta Beej. He was a horrible demon whose blood when fallen would create another copy of him. So Maa Kali started drinking every drop of blood of Rakta Beej and saved the mankind n universe.

Do not look at her as if she is an ordinary naked woman coz she is the mother of the universe!

Although Shiva-Shakti are inseperable Brahmanaswaroop , but in the manifested world Lord Shiva is the eternal Masculine, while GODDESS MAHAKALIKA is the eternal Feminine. After her ritualistic marriage, Goddess Parvati who lived as any other queen, too started living with Mahayogi SADASHIVA on the holy mountain KAILASH with bare minimum, giving up all false material attachments as did Shiva lived. She was thus, not obeyed at Daksha yagna as well by his father Daksha, because of her extreme attachment with Mahayogi Lord Shiva and his yogic peaceful way of living. No body has ever seen Lord Shiva as such except for their sacred-marriage day when LORD SADASHIVA comes to marry Goddess Kali and takes her to his eternal abode KAILASH parvat, that's why we all worship Shiva-Shakti as formless Jyotirlingam swaroop.(Note: Lord Shiva was again seen secondly to world when he came to rescue the escalating situation as nectar finished by Deva and he swallowed the deadly hot poisonous Halahal to save universe thereafter on Trinity's special request.) Goddess Parvati too lived on Himavat parvat, so after her marriage with Shiva, she was named as Kalika for her ferocious nature (she provided complete protection to the devotees who remembered her) and thus, after marriage none seen Shiva-Kalika ever. But, pictures displayed anywhere in the world/books are imaginations only assuming as a Yogi Shiva isn't attached to clothes,etc so does her yogini Kalika, but no one was ever able to see them as they are always situated in their own YOGAMAYA, and are eternal parents of all this 5-elemental universe, universal happenings, and can be only accessible through what sages call as divine love- as they remain imperceivable always in their own Spiritual abode.

Reason:According to sacred scriptures the God is formless Sadashiva, he takes form as Mahashiva and Mahamaya and from Mahamaya these three gods are born Bramha ,Vishnu and Rudra, and there consorts Brahmini, Lakshmi , and Kali-being born of Mahamaya(higher spiritual arrangements) they all are Swatantra and powerful but are under Mahamaya as we are under Maya there Maya is VIDYA MAYA -she controls all the activities and designs the course of destiny of trinity and synchronizes 10 avtars of Sri Hari Vishnuji,various leelas of devas and other happening of universe. Sadashiva is father wrt the Householder Lord Shiva who does leelas along with Shakti KALIKA,and actually vishnu and shiva are synonyms they are not different and brahma as well the trinity is actually three different understandable powers of one Sadashiva...He is yagna purush ,Hiranyagarbha Tatpurush,kaivalyabramha,Poorna Parmeshwarr,Adideva,Sarva sakshi, Aptakaam,Param karan,Sat Chit Ananda of Vedant.and all Agam Nigam Shastras, and the only god who is free Swayambhu. Only Shiva as far told verbally "I am God, I am Shiva", to both Brahmaji and Vishnuji to end their quest for higher knowledge than themselves.

Not the answer you're looking for? Browse other questions tagged goddess symbolism durga kali .

3
An attempt to malign our religion by an Islamist in the Article. Can I get good refutations of this man claims?

14
What is the meaning of Swadha?
3
Exact relation between lord shiva and goddess Kali?
6
About Ramakrishna Paramahamsa and Kaali Maa
9
Understanding Maya or Prakriti as the Supreme Goddess. Or the difference between the two. Also why is a female goddess personified as Maya?
6
Why does the half-moon symbolize timelessness in Hinduism?