What is Adi Shankara referring to when he says “He has Vajra marks on his feet”?

The Mahabharata, Mokshadharma (San., 343-41) says: "I first knew (vinda) the Earth (go) which was carried away and hidden in a cave (by an Asura), hence I am praised by the appellation 'Govinda' by Gods, and Scriptures." The Harivamsa (76-45 and 279-49) says: "I am Indra (Lord) over the Devas, thou art lord over the cows, hence the world will ever praise Thee as, Govinda '; speech is named 'Go,' and since thou conferest speech, 0 Lord, the Sages call you 'Govinda'."

Ka Go+ Vide has the following tell meanings: Go
1. Svarga (Heaven). He transcends the Heaven.
2. Arrows (He knows all the weapons).
3. Cattle. He is the leader of the ignorant ones.
4. Speech. He is to be known by the Vedas.
5. Thunderbolt; He has the Vajra marks on his feet.
6. Quarters; He is known in all quarters.
7. eyes; He is in the person residing in the eyes.
8. The sun ; He is in the form of the Sun.
9. Earth; He recovered the Earth from the Titans.
10. Waters; His seat is in the waters.
And Vid, to know.

My question is on the fifth meaning Adi Shankara gives. He comments "Thunderbolt; He has the Vajra marks on his feet".

Where is it stated that Vishnu (or Krishna) has marks of Vajra (thunder bolt) on his feet?

It is generally believed that Lord Krishna has various markings on his feet as stated in the above question. Is Adi Shankara referring to them? What verse or incident is he indirectly referring to?

The Vajra-Chinha is mentioned in Srimad-Bhagavatam (3/28/21)

Meaning: The devotee should first concentrate his mind on the Lord's lotus feet, which are adorned with the marks of a thunderbolt, a goad, a banner and a lotus. The splendor of their beautiful ruby nails resembles the orb of the moon and dispels the thick gloom of one's heart.

These signs are by the way well-known among the worshippers of Sri Vishnu/Krishna and mentioned in the Sri Sri Chaitanya-Charitamrita also (1/14/4-16).

As per the answer to What is the Significance of 'paadaseva' of Sri Vishnu?, the thunderbolt mark is also mentioned in the thirteenth chapter chapter of the Skanda-Purana:

‘At the base of the large toe on His right foot, the unborn Supreme carries the mark of a disc, which cuts down the six (mental) enemies of His devotees. At the bottom of the middle toe of that same foot, Supreme Achyuta has a Lotus flower, which increases the greed for Him in the minds of the beelike devotees who meditate on His feet. At the base of His small toe is a thunderbolt, which smashes the mountains of His devotees’ reactions to past sins, and in the middle of His heel is the mark of an elephant goad, which brings the elephants of His devotees’ minds under control. The joint of His right large toe bears the mark of a barleycorn, representing all kinds of enjoyable opulence.’

Adi Shankara didn't quote from Bhagavatam in any of his commentaries. So, it is likely that he may be referring to verses from Vishnu Purana (5.13.29-31) 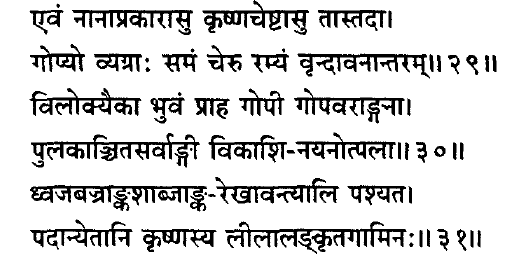 Thus in various actions of Kṛṣṇa the Gopīs imitated him, whilst away, and beguiled their sorrow by mimicking his sports. Looking down upon the ground, one damsel calls to her friend, as the light down upon her body stands erect with joy, and the lotuses of her eyes expand, “See here are the marks of Kṛṣṇa's feet, as he has gone alone sportively, and left the impressions of the banner, fife thunderbolt, and the goad.

Also, Bhagavatam mentions the marks on Krishna and Balarama's feet in 10.38.28-33

In Vraja he(Akrura) saw Krishna and Râma, who, wearing yellow and blue garments and with eyes that looked like autumnal lotuses, were going to the place where the cows were milked. The two boys who are the shelter of the goddess were, bluish-dark and fair skinned, most beautiful to behold with their mighty arms, attractive faces and a gait like that of a young elephant. With Their feet marked by the flag, bolt, goad and lotus, and with Their smiles and glances full of compassion the two great souls increased the beauty of the cow pasture. They whose pastimes were so magnanimous and attractive, were freshly bathed, impeccably dressed, wore flower garlands and jeweled necklaces and had smeared Their limbs with auspicious, fragrant substances. The two original, most excellent persons, who are the Cause and the Masters of the universe, had for the welfare of that universe descended in Their distinct forms of Balarâma and Kes'ava. Oh King, with their effulgence they, as a mountain of emerald and a mountain of silver both decorated with gold, dispelled the darkness in all directions.

Not the answer you're looking for? Browse other questions tagged vishnu adi-shankaracharya vishnu-sahasranama symbols .

7
The iconography of Laddu Gopal's soles
3
What is the Significance of 'paadaseva' of Sri Vishnu?

6
Why does Adi Shankaracharya think Rig Veda 10.71.3 verse implies the Vedas are eternal?
11
Where is the mention of 'Chanting Rama three times is equal to chanting 1000 names of Vishnu'?
2
What happened to the sinner Kshatrabandhu after he chanted Govinda?
1
Do Advaitins believe that Vishnu appeared before Gaudapada?
9
Did Adi Shankaracharya really believe in Hari-Hara abheda?
10
When did Vishnu destroy trident of Shiva?