What scriptures describe the Rishi Shalihotra cutting the wings off of horses?

The Ashva Shastra is a work of unknown authorship about the nature and proper care of horses. Now this chapter of the Ashva Shastra says that there used to be winged horses, but then Indra asked the sage Shalihotra to cut off their wings because Asuras were using them in battle: 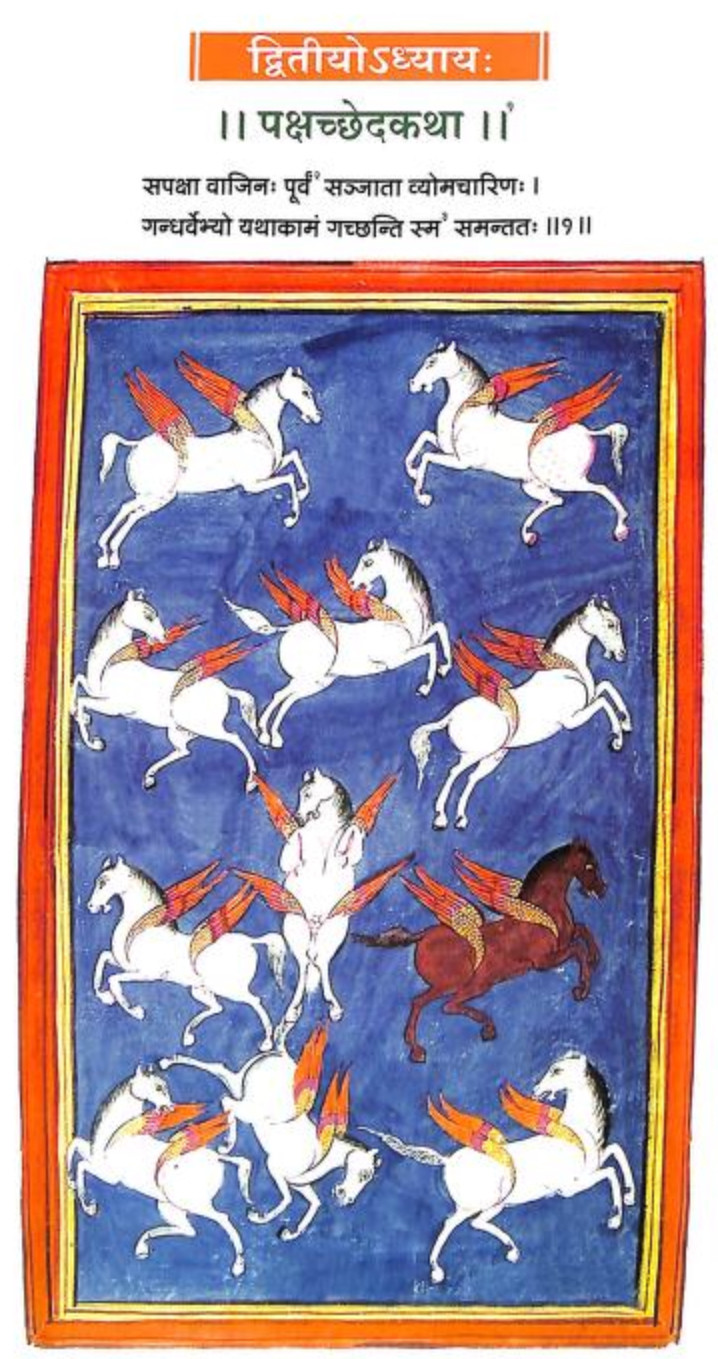 In times of yore horses endowed with wings used to fly all around freely along with Gandharvas. Seeing these vigorous, mighty and rideable horses, Lord Indra approached Sage Shalihotra and sitting near him said - "Oh! Revered Sage, nothing is insuperable for you in this triad [of worlds], therefore kindly accept my request and shear the wings of these horses. During the war, these horses draw the chariots of the demons, which are unbearable even for the best elephants. Accepting the request of Lord Indra, Shalihotra sheared the wings of the horses by using Ishikastra.

The wing-shorn, calamitous, pitiful and bleeding horses said to sage Shalihotra - "Oh Lord! Why did you cut off our wings? Noble persons do not behave with innocents like this. Therefore, be the shelter for all of us. We wish happiness forever, oh, greatest among the sages!" The sage melted in compassion and told those grievous horses, "I have done such a painful thing on the request of Indra. Therefore, now I will recompense you so that you may attain pleasure, nourishment and vigour in your bodies and fame in the triad [of worlds]. You will also be embellished as the glorious vehicles of the Sun God, Indra, other deities and kings. The king who will take the proper care by providing enough grass, water and other comforts to you would be undefeatable. The lotus eyed Bhulakshmi would never give up that king in spite of his being bereft of supporters or surrounded by the enemies. Now I will reveal the supreme treatment for the horses which will nourish them, cure their diseases and thus work for the welfare of the mankind. Now as my order, you dispense yourselves in Bhuloka, Patalaloka and Svargaioka according to your own choice for peace.”

Now I’m familiar with Shalihotra; he’s the Rishi that Vishnu appeared before in my Mom’s Kuladevata temple of Thiruvallore, which I discuss here. But my question is, what scriptures describe Shalihotra cutting the wings off of horses?

12
What scriptures describe Vishnu marrying a rebirth of the golden Sita statue?

10
Who is the Brahmana changed into a woman in the Rig Veda?
4
Who is the wood-cutter Indra promised would be honored in every Yagna?
11
What scriptures describe Indra defeating Asuras using Dadhichi's old horse head?
9
Who was the wife of Kaushik who stopped the Sun from rising to save her husband's life?
2
What scriptures describe the story of the frog princess?
5
Who is the Rishi who cut off his own hands for stealing?