In the Chatuhsloki Bhagavata and Saptasloki Gita which quotes SEVEN slokas from Srimad-Bhagavatam and Srimad-Bhagavad-Gita respectively, I found NO mention of the words 'Vishnu' and 'Krishna'!

But these are considered to be essences of Bhagavata and Gita respectively.

Who compiled these two?

Mahaprabhu has mentioned the word 'Chatuhsloki' by the way.So there must had been some reference somewhere in the scriptures of these slolkas being mentioned as 'Chatuhsloki'.

Ahnikkrittya is a very famous book and the writer and compilervwas a very very renowned scholar.

I will say about Bhagavatam.

I meditate upon that pure and spotless Supreme Absolute Truth, who is free from suffering and death and who in the beginning personally revealed this incomparable torchlight of knowledge to Brahmā. Brahmā then spoke it to the sage Nārada, who narrated it to Kṛṣṇa-dvaipāyana Vyāsa. Śrīla Vyāsa revealed this Bhāgavatam to the greatest of sages, Śukadeva Gosvāmī, and Śukadeva mercifully spoke it to Mahārāja Parīkṣit.

(44) This story of the Fortunate One, the Bhâgavata Purâna, that with its ten characteristics was explained by the Supreme Lord, was thereupon explained by the creator of the universe to his son [Nârada]. (45) On the bank of the Sarasvatî Nârada [in his turn] instructed this Supreme Spirituality to the great sage, the meditative Vyâsadeva who is of an unlimited potency, oh King.

Now, I quote from Hindu Theology in Early Modern South Asia: The Rise of Devotionalism and the Politics of Genealogy (Oxford Theology and Religion Monographs)

The BhaPu, second book, chapter nine, relates the following story as the background of the Catuhslokibhagavata, that is, 2.9.32-35. Before the creation of the universe, Brahma was born on a lotus flower stemming from the navel of Garbhodakaiayi Vishnu'. Brahma tried to trace the origin of the lotus on which he was sitting, but he was not successful. While contemplating the matter of creation, he heard the sixteenth and the twenty-first syllables of the Sanskrit alphabets, namely, ta and pa, which, in combination, mean an injunction, 'You should perform austerity.'" He looked for the speaker of the injunction, but he was again unsuccessful. Subsequently, he sat down on the lotus and engaged in performing austerity in the form of meditation. After Brahma had meditated for a thousand years," Vishnu appeared." He praised Brahma for his performance of austerity and gave him a boon: to ask whatever he desired. In response, Brahma asked the following four questions. According to Joshi, these four questions correspond to BhaPu 2.9.25-28: (1) What is the nature of your subtle and gross form? (2) How can I understand the nature of your Maya, Yogamaya and their effects? (3) How do you play in the universe covered by Maya and YogaMaya (4) What is that action by which I will not be bound while creating the universe? (Joshi 1974:27-28) Vishnu replied to this question in seven verses, i.e. BhiPu 2.9.30-36, which includes the CaSloBha. Therefore in Vallabha's Subodhini, he argues that BhaPu 2.9.30-36 should be taken as one section, constituting the Saptashlokibhagavata. In contrast, Sridhara, Jiva, ViSvanatha, and Suka-deva take 2.9.32-35 to be the real answer to Brahma's four questions (Joshi 1934: 26-27) In BhaPu 2.9.30, the Lord says that He will answer Brahma's questions in terms of knowledge (jnana), realization (vijnana), secret (rahasya), and auxiliary (tadanga).'7 These four points correspond to verses 32 to 35. In verse 31, the Lord says that these four points are revealed to Brahma through His favor (madanugrahat). Therefore, it is clear that what He says in the following four verses is to be understood as a revelation by Visual, to Brahma in the form of His favor.

Sridhara was the first commentator to identify these four verses as the original revelation. Chaitanya follows him since he accepted Sridhara as the best commentator on Bhagavatam. This identification of the four verses as the original revelation is found in Sridhara's commentary on Bha Pur 2.9.43: "[Brahma] spoke in detail [to Narada] what the Lord spoke [to him] briefly in four verses in which the topics expressed as ten characteristics are known"

I found one reference to catuh shloki in Bhagavata Mahatmya of Padma Purana.(6.194.63-71)

The Bhagavata-account has risen from the quintessence of the Vedas and the Upanisads. Therefore, it appears to be the best, and the rise of fruit is different. As the taste is present in a mango fruit from the bottom to the top, but is different when separated and drunk, and delights all, as ghee present in milk is not thought to be pleasant, but when separated is divine, and increases the joy of gods, as sugar remains pervading the bottom, the middle and the end (i.e. the top) of a sugarcane, and is sweet when separated, so is Bhagavata-story. The Purana named Srimad Bhagavata is relish itself; it is manifested for the happiness of Bhakti, Jnana and Vairagya to Brahma, remaining in the lotus born from his navel, by Krsna. The four-versed (summary) of it appears to be the entire Brahman. That account was narrated to you by Brahma. You also narrated it to Vyasadeva, to destroy torment. By remembering it Badarayana (Vyasa) instantly became free from lamentation; and in a manner delighting the soul, composed (the work of) the great name. Due to what are you amazed, that you are asking again and again? The holy text of Srimad Bhagavata is capable of attracting Krsna.

Madhvacharya & Vijayadhwaja of Madhva school doesn't identify them as catuh/sapta shloki but comment upon them.

The book also does a comparative study of commentaries of Sridhara, Jiva and Madhva&Vijayadhwaja. 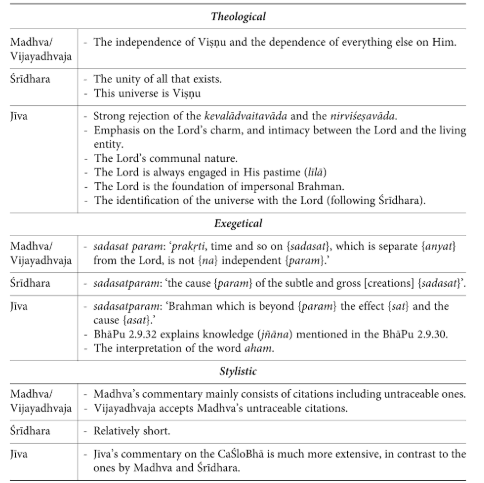 6
Who are the authors of and what are the significances of "Eka Sloki Ramayana" , "Eka Sloki Bhagawatam" and the like?

11
Why do Gaudiya Vaishnavas think the order of the Yugas is Satya, Dwapara, Treta, Kali?
7
Discrepancy in the timeline of compilation of the Srimad Bhagavatam and the Mahabharata
3
Questions regarding the number of verses in the Bhagavtam
10
Why did Ramanujacharya & Adi Shankaracharya never refer to the Srimad Bhagavatam in their works?
12
What scriptures describe Vyasa's son Shuka creating a duplicate of himself?