Did Lord Ram visit Nashik during his exile?

Answer to this Question: Lord Rama's path to exile from Ayodhya in today's India describes the approximate path of Lord Rama's travel during the exile, but Nashik is not mentioned. According to the Wikipedia page of Nashik, it is the place where he cut the nose of Shurpanakha, therefore the name Nashik, also Panchavati is also located in Nashik, so did he visit Nashik? If yes then during which phase of his exile did he go there?

a) The most popular one was pasted below. 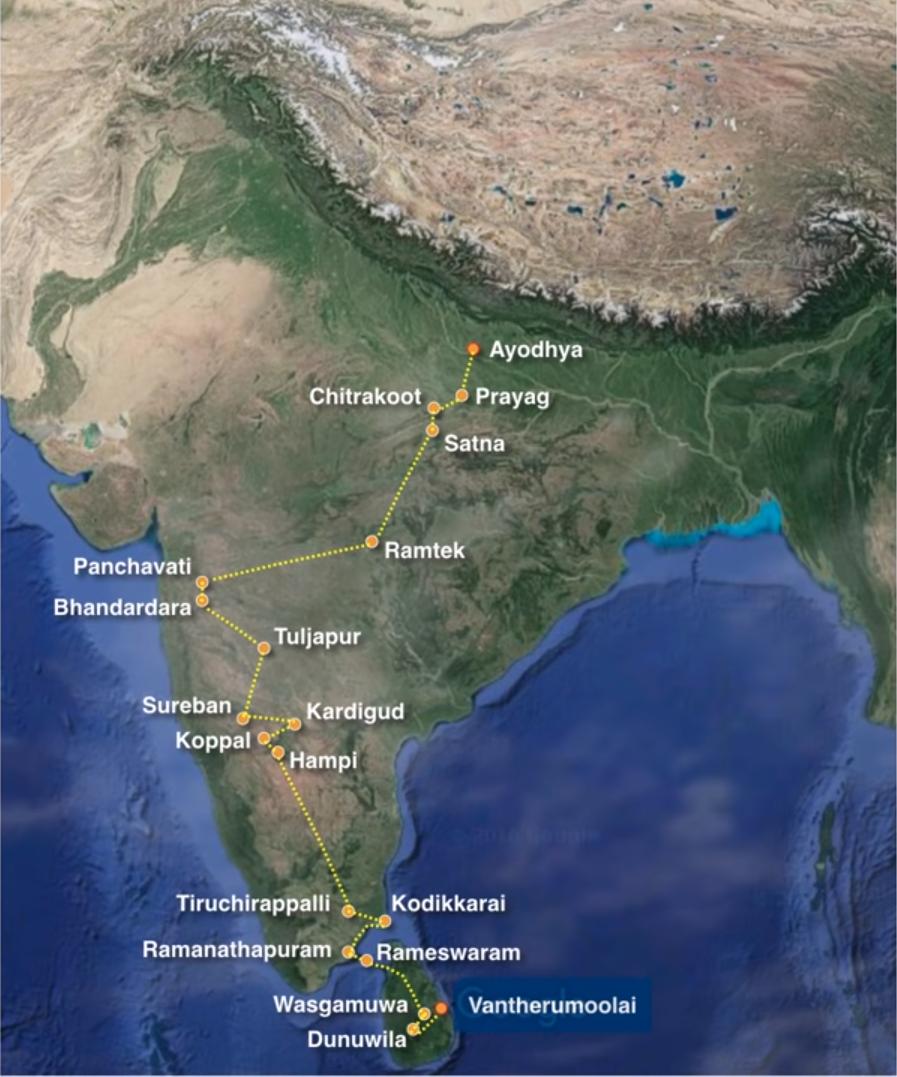 b) In Southern India, it was strongly believed that Sri Rama spent 3 years, after roaming in Dandaka Forest for 10 years, near Parnasala at Bhadrachalam in Telangana State of India.

In the 14th year, after Sita's abduction, it was believed that Sri Rama and Lakshmana crossed River Godavari and finally reached Kishkinda (present day Karnataka).

So whether it was from Panchavati in Maharashtra State or Parnasala in Telangana State people believe that after Sita's abduction, it was believed that Sri Rama and Lakshmana crossed River Godavari and finally reached Kishkinda (present day Karnataka).

Sage Valmiki did not clearly mention as to the position of Sage Suteekshna in the Dandaka Forest. It was Sage Suteekshna, who gave directions to Sri Rama to Sage Agastya's hermitage.

"On your going four yojana-s from this hermitage, oh, dear Rama, there is the great and glorious hermitage of Agastya's brother on the southern side."

"On going one yojana beyond, taking the southward course on the side of the forest clump you will find Agastya's hermitage."

Sage Agastya directed Sri Rama to dwell at Panchavati, which is nearer to his hermitage.

"A most prosperous place called Panchavati is there at a distance of two yojana-s from here, oh, dear Rama, which is abundant with tubers, fruits, water, and many deer." Thus Agastya started to tell.

So Panchavati was nearly at a distance of two yojana-s ,ie., 26 Kms from Sage Agastya's hermitage. Therefore, we cannot exactly fix the place of Panchavati, taking clues from Srimad Ramayana.

It can be anywhere along the course of river Godavari or its tributories, as we do not know whether people of that era used to call which river with which name!

After performing the last rites of the bird Jatayu, near Panchavati, Sri Rama travels nearly 3 Krosa or 11 Kms distance before reaching Krauncha Forest.

After having a fight with Kabandha, and upon his direction the 2 brothers reached Pampa and Kishkinda. So Kishkinda is not much far off from Panchavati.

Again when sending the troops to Southern direction in search of Sita, Sugriva orders them to start their search from Vindhya Mountains.

Sugreeva made the formidably mighty Angada as the chief of those valiant monkeys forming search party and ordered southern direction for them.

"Search the thousand crested Vindhya mountains abounding with numerous tress and climbers, then the delightful Narmada river coursing a little southerly to that range, which is adored by great snakes”.

Now a question arises, if Kishkinda was in area of present day Karnataka state, why should Sugriva order vaanaras to start their search from Vindhya mountains and stated to cross Narmada river, which are located in Madhya Pradesh area?

Any sane person will decide the 4 directions, ie., North, South, East and West, according to his place of stay only, but not somewhere else.

Hence, Kishkinda might have have been located in the area of present day Madhya Pradesh or Chattisgarh only, but not Karnataka state, as commonly believed.

People of that era might be referring to Sabari river, a tributary to River Godavari, as Godavari and originates in Chattisgarh area and merges in river Godavari near Kunavaram, nearly 53 Kms away from Bhadrachalam of Telangana State.

From Ayodhya, God Rama, Sita and Lakshmana cross River Tamsa and then River Gomti [Ref: Valmiki Ramayana 2.45-49]. They reached the banks of River Ganga at Shringverapura, a region ruled by their friend Nishada King Guha. Then, they cross River Ganga in a sturdy boat having a rudder [Ref: Valmiki Ramayana 2.50-52], driven by boatman Kevat. This is present-day Shringverpur in Uttar Pradesh state.

They reach Rishi Bharadwaja’s ashrama at the confluence of River Ganga and Yamuna, present-day Prayagraj in Uttar Pradesh state. Bharadwaja advises them to go westwards and stay at an idyllic place called Chitrakoot which is on the border of present-day states of Madhya Pradesh and Uttar Pradesh [Valmiki Ramayana 2.54-56]. Even today, one can visit locations in Chitrakoot like Rama ghat, Sita rasoi, Janaki kund and Bharat-milap temple.

There is also Sati Anasuya ashrama 16 km from present-day Chitrakoot, nearby are Viradh-kund and Sharbhanga ashrama visited by them [Ref: holydham.com].

Many evidences of their presence are found in present-day Ramtek in Maharashtra, and Parnasala on the banks of River Godavari in Telangana state near the temple town of Bhadrachalam which is also called Dakshina Ayodhya. There is an Agastya ashrama in Parnasala.

But, there is also an Agastya ashrama on the banks of River Pravara at Aroli village in Akole taluka, south of Nashik. Another Agastya Rishi temple is on Ankai hill, east of Nashik [Ref: ramyatra.com; Tripadvisor.in].

Agastya guides them to the nearby Panchavati [Ref: Valmiki Ramayana 3.13]. This is believed to be present-day Nashik in Maharashtra state having locations like Panchvati, Tapovan, Rama-kunda, Sita-gufa and Lakshmana-kunda. God Rama, Sita and Lakshmana also worship Goddess Durga at the nearby Saptashrungi temple as per local folklore.

[Source: 'Essence of the Fifth Veda' by Gaurang Damani pages 9-12].

8
Lord Rama's path to exile from Ayodhya in today's India

7
Did Lord Rama exile Maa Sita?
15
When did Vibhishana stop being king of Lanka?
8
Where did Ravan go after his death by lord Ram?
8
Lord Rama's path to exile from Ayodhya in today's India
6
Which are all Rishis whom Rama met during his Exile of 14 years?
6
Is Vasistha an (Biological) ancestor of Rama?
11
Does Shri Rama return in the month of Chaitra or Vaishakha?