The Sthala Purana (Temple History) of the Sri Rangam Temple in Tamil Nadu states that the divine Vigraha (idol) of Lord Ranganatha originated by itself (Svayamubhu) and was originally worshipped by Lord Brahma in Satyaloka.

It was then handed over to King Ikshvaku on Bhuloka, for the Tapasya he performed. Since then, the divine idol of Lord Ranganatha was worshipped by the Surya Vamsa (The Sun Dynasty, which was originated by Ikshvaku), up until Rama. It is said that Rama worshipped this Vigraha, and after he came back from exile, gifted it to Vibhishana. Vibhishana on his way to Lanka kept the statue on the ground, as he had to perform his Sandhyavandana, and here is where it stays until today. 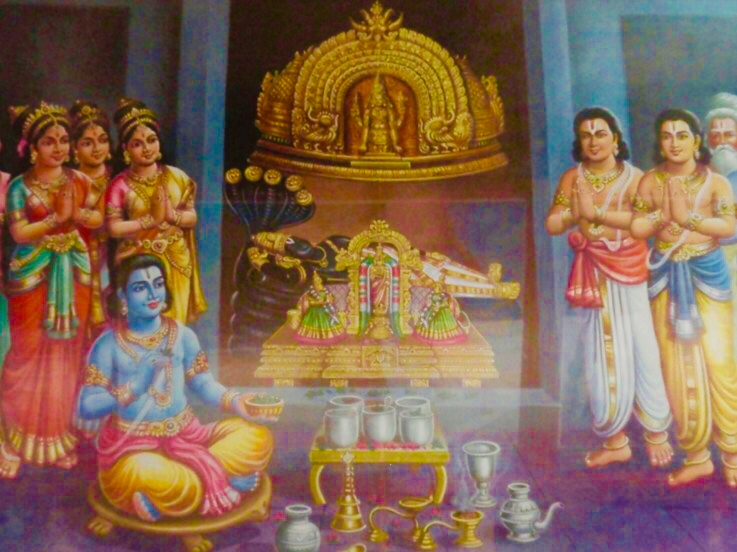 In this picture, we can see Lord Rama worshipping Lord Ranganatha. The story goes onto how the statue was lost in a huge flood and was retrieved by the King Kili Chola, but that is not necessary for this question.

But my question is, are there any scriptures that specifically mention Lord Rama worshipping the idol of Lord Ranganatha? If so, please cite them in your answer.

I am new here and I do not have the reputation score that is required to comment. Hence this answer.

As far as I have searched and heard, there is no reference to any scriptures as such. Srirangam as such is extremely revered and is the most important temple for srI vaishNavites. This temple is revered more than even tirumalA by most of our AchAryAs. To this day, this story of how srI ranganAthA came to srIrangam is only told by various srI vaishNavA scholars during their upanyAsams and they do not quote any of our pUrvAcharyAs or scriptures.

The story goes; after brahmA was born, he set out on a search for his creator and couldn't find anything even after several 1000 years of searching. He then went into a deep meditation to understand himself better. He came to learn of srIman nArAyaNA. brahmA expressed a desire to meet him. srIman nArAyaNA manifested in the form of srI ranganAthA in thirupArkadal (ksheerabdi sagar) and appeared in sathya lOkA (brahmA's abode). brahmA did the daily rituals for srI ranganAthA. The story also tells that srI ranganAthA appeared in sathya lOkA along with the praNavAkAra vimAnam that is present even today. 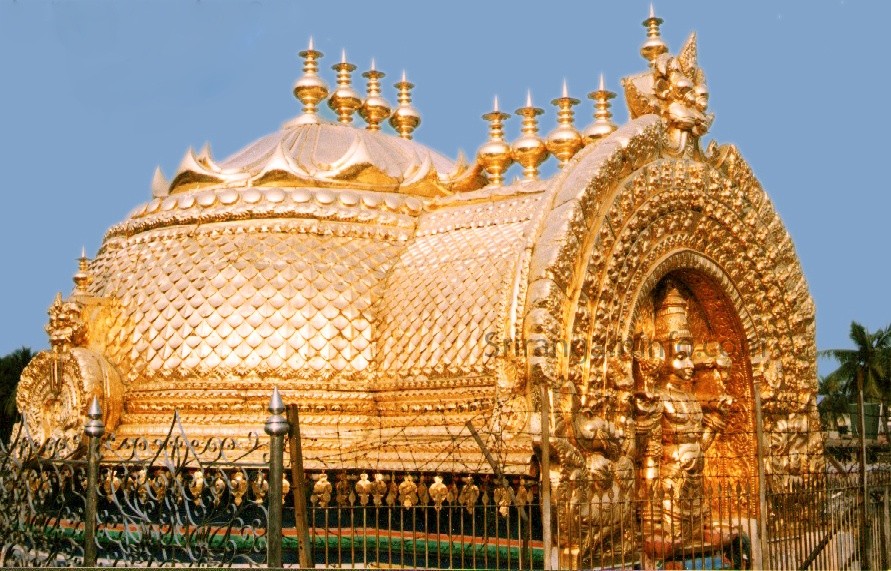 The first king of the solar dynasty, ishvAku had gone to sathya lOkA to pay his respects to brahmA. He expressed interest in performing daily rituals for the beautiful lord. brahmA was fond of ishvAku and asked the lord what to do. srI ranganAtha permitted brahmA to hand over srI ranganAthA along with the praNavAkAra vimAnam to ishvAku. brahmA desired to continue the daily ritual worship for srI ranganAthA and the Lord told him not to worry as srI ranganAthA will return within one day as time works differently in sathya lOkA. By the time this present day gets over for brahmA, 1000 mahA yugAs would be completed in bhU lOkA where ishvAku was taking him; hence brahmA would be able to do is worship the next day as well.

The rest of the story proceeds as you have described in the question with one small difference. vibhIshaNA had to put the idol down in the present day location in order to perform the panguni utsavam (a celebratory festival done for srI ranganAthA in the tamil month of panguni; Feb-March in the English calendar).

When vibhIshaNA was ready to leave after celebrating the festival, a choLA king of the period by the name dharmavarmA requested vibhIshaNA to leave srI ranganAthA here. The Lord also requested the same of vibhIshaNA and consoled him by saying that he would lie in a posture facing lankA. I haven't checked the statistics; but I have heard it is very rare to see any ranganAthA lying facing south.

The Lord Ranganathan- who has His Thirumudi in the West; Thiruvadi towards East; back facing North and the Eyes looking to South (lankA)..(as assured to Sri VisbhIshaNAzhwAn) is of Blue hued Ocean coloured, Divinely Beautiful Form. Oh! My body is melting.. what can I do, oh wordly people!

I have heard this legend several times as it comes up in several upanyAsams. It is generally accepted as the truth in srI vaishNaviTe circles.

As said right at the beginning, I only wanted to comment as the answer as such does not add much value to your question.

8
Did Lord Rama really worship Lord Shiva?
4
Is the temple at Tirumala really the abode of the Goddess Bala Tripurasundari?