In the painting shown who is the person standing on stairs in front of the throne? 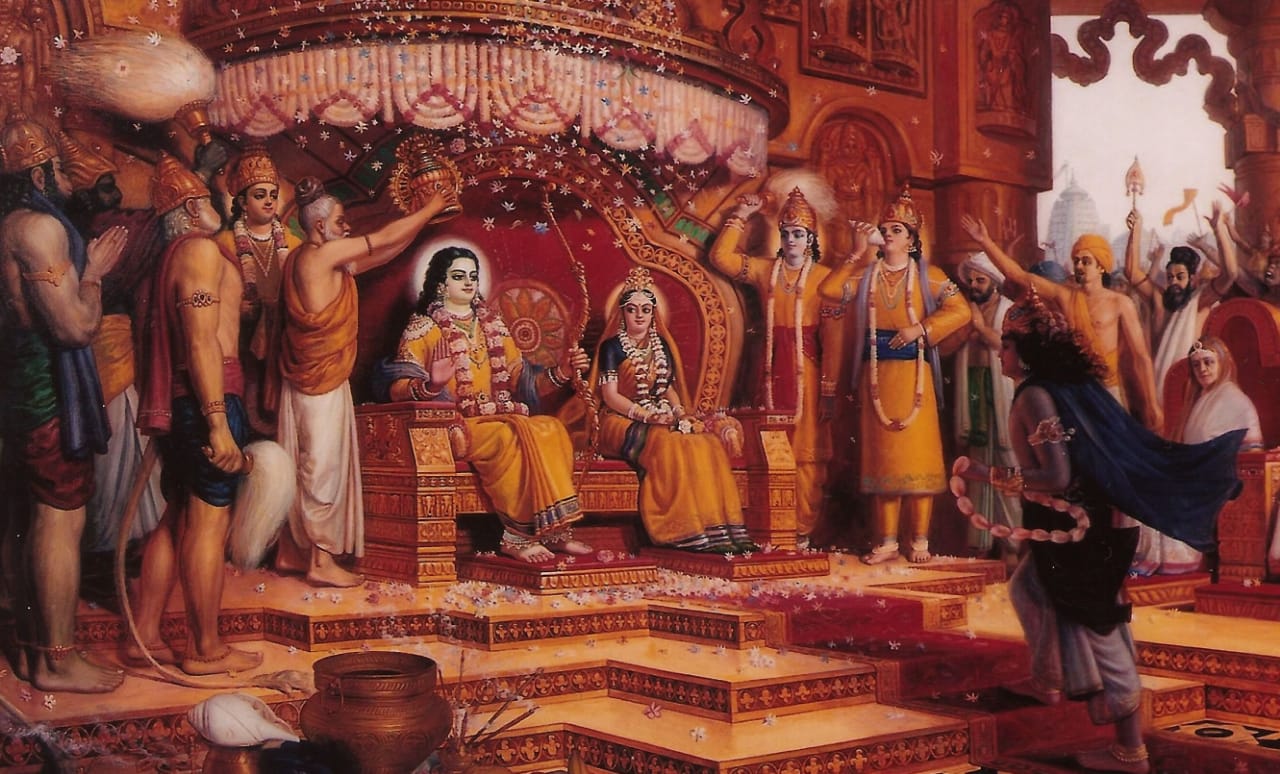 In the painting shown who is the person standing on stairs in front of the throne?

It is Vayu Deva (Wind god).

The image depicts the coronation of Lord Rama after he has returned from the exile. I found the full image on the internet. 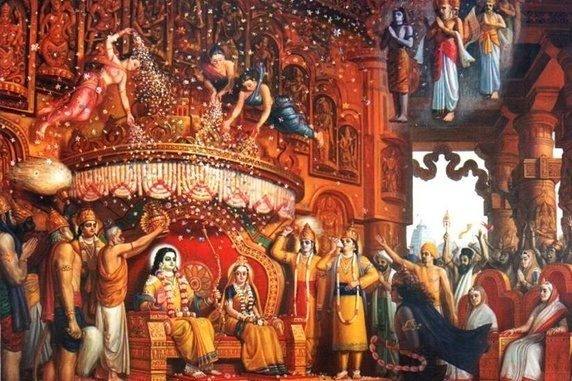 This image is almost accurate in depicting the coronation as described in the final chapter of Yuddha Kanda.

The image shows Rama was adorned by the crown. celestials watching from the sky, apsaras dancing. Bharata, Sugriva, Vibhishana holding white frisks and fanning Lord Rama. When this was happening, Lord Indra asks Vayu to present a garland of 100 lotuses to Rama.

Let's see how is this scene described by Valmiki in the Ramayana. [Translations from valmikiramayan.net]

With which crown, long ago, Manu the emperor was adorned while he was consecrated and with which, the kings followed in his line were successively adorned while they were coronated, that crown studded with precious jewels, fashioned by Brahma at the beginning of creation and dazzling with splendour, being kept according to practice on a throne adorned with many kinds of precious stones in the council-hall, studded with gold, graced with abundant riches, decorated and shiningly made with most charming jewels of various kinds, and thereafter Rama duly adorned by that crown as well as jewels by the great-souled Vasishta and other priests officiating at the coronation-ceremony. [Sarga 128 shlokas 64-67]

Shatrughna held over him, a white and charming parasol; Sugreeva the king of monkeys, a white whisk and vibhishana the lord of demons, another whisk shining like the moon. [Yuddha Kanda Sarga 128 shlokas 68-69].

Encouraged by Indra, the lord of celestials, the wind-god presented to Rama, a golden garland consisting of a hundred lotuses and which looked shining brilliantly. [Yuddha Kanda Sarga 128 shloka 70].

It is clear in the image that he is bringing a lotus garland. It is only Vayu who brings a garland in the court. The painter took some artistic license to show the lotuses in their original color instead of golden as described by sage Valmiki.

Lord Vayu is generally depicted in blue hue color and also sometimes in greenish. I searched for articles and images of Vayu and found several depictions where he is shown in blue complexion mounted on his deer and holding a white flag. Below taken from an article from Hinduwebsite.com 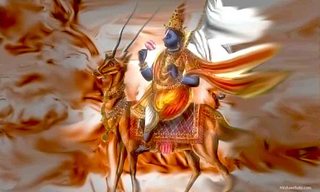 Based on the description from the Ramayana and what is popular about Vayu's depiction, we can safely say it is Vayu who is bringing a garland of lotuses and coming towards Rama.

Not the answer you're looking for? Browse other questions tagged ramayana identification-request .

5
Is Raja Ravi Varma's painting Birth of Shakuntala true to the story?
5
Did Lord Shiva and Lord Rama ever meet in person?
3
What is the story of the son of Ravana who was a devotee of Narayana?
1
Was Lord Ram under Maya's influence when he wanted to confirm if Shri Bharat still wishes to continue as King?
7
Why did Ram give up Sita instead of the throne?
8
What is the meaning of the verse which Tirumazhisai alwar reminded to the Brahmins?