When paramatma can control souls why does he need various weapons?

When paramatma can control his own souls why does he fight with weapons ? 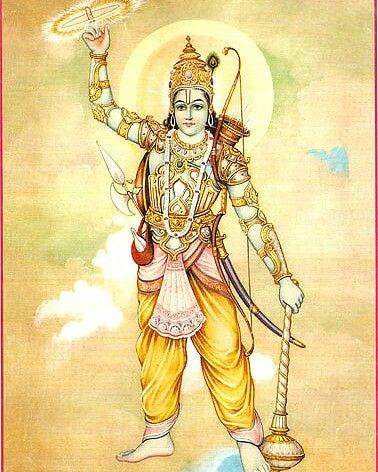 The concept of God is Abstract.

However, different people understood it differently, and expressed their expressions according to their perceptions.

Now behold, O Arjuna, in this, My body, the whole universe centred in one including the moving and the unmoving and whatever else thou desirest to see.

And, what did Arjuna see? He describes the Viswavupa as possessed of numerous arms, bellies, mouths and eyes; as having infinite forms all around.

I see You as wearing a diadem, wielding a mace, and holding a disc; a mass of brilliance glowing all around, difficult to look at from all sides, possessed of the radiance of the blazing fire and sun, and immeasurable.

The secret of Vishwarupa lies in the above Sloka, wherein Sri Krishna said -यच्चान्यद्द्रष्टुमिच्छसि - whatever else thou desirest to see.

Sri Krishna never said that I am showing the Vishwarupa to you and that these all comprise my Vishwarupa.

He simply said that "See whatever you want to see - यच्चान्यद्द्रष्टुमिच्छसि ".

So whatever Arjuna saw during Viswarupa Sandarsana, it was his own mind's projections and imaginations.

Similarly, attributing different weapons, vehicles to the God, is according to one's own perception.

We hear from the scriptures that the God is All powerful. So does the God need to carry weapons to achieve anything?

Did Sri Krishna go the assembly of Kauravas with weapons?

Not the answer you're looking for? Browse other questions tagged vishnu shiva krishna weapon .

3
Under what circumstances god take an incarnation?

5
Why does Brahma's Brahmastra destroy when his task is to create?
10
Why did some Hindu gods behave helpless just like human beings?
13
Why does Vishnu have eight arms when Krishna and Arjuna go to see him?
3
Does the Narayanastra weapon of Vishnu summon the Rudras?
4
Tarkasura's fight with Ganesha, Kartikeya and Vishnu
13
How knowledge of weapons (shastra) शस्त्र got lost?
1
why we can not control our mind even chanting the hare -krishna mantra or any other highly recommended mantra by spiritual guru?
1
Is it possible to use astras in Kali Yuga