Some answers to *What do Hindu scriptures say about women headscarf (hijab)*? on Quora.com cite these verses from the Rigveda that seem to suggest Hindu women should wear a head veil:

God made you women, so that you shall lower your gaze, do not look at men, keep your feet close, cover your head and do not disclose the garment, which should be concealed with the veil

The guy in this YouTube video (Hindi) also quotes one of these verses.

What is the context of these mantras/verses? Do they really suggest women during Rigvedic times wore a veil to cover their heads and faces?

This is what the Rig Veda hymns say:

The hindi version clearly states that in certain condition if the husband engages with his wife then his body too will be affected.

19 Cast down thine eyes and look not up. More closely set thy feet. Let none See what thy garment veils, for thou, a Brahman, hast become a dame.

It doesn't say cover your head etc. it says no one should see what the garment is concealing.

30 Unlovely is his body when it glistens with this wicked fiend, What time the husband wraps about his limbs the garment of his wife.

In this as well it inquiring about the time a husband wraps the garment of his wife around his limbs ... nothing about women using a veil. Perhaps the difference is in the translations.

19.Cast your eyes (son of Playoga) downwards, not upwards: keep your feet close together; let not (men) behold your ankles, for from having been a Brahma you have become a female.

You have Become, Female- Indra is supposed to say this to Asanga as a female.

Fiend in general means evil/wicked and here it appears to refer to evil act/intentions.

“O men and women, keep your eyes down on earth and not sky let your lower legs be covered and not exosoed ; walk on both feet together(as two wheels and two horse draw chariots together, let women be high priest of Home Yajna”…

Here RV refers of performing Yajna, And they are referring to performing Yajna on ground where Agni flames.. They said to both men and women cover their lower legs.. It may have some poetic meaning but There isn't any veil.. "It is the acutal translation "

In this mantra it is advised to not to do any type of Sexual intercourse with wifeom her periods.. Clothes of bleeding shouldn't be touch by anyone.. Also it can be injurious to women's body!!!

I don't know where people get these false translation.. There are many sites which claim false truth!!

Rig Veda 8.33.19 doesn't seem to be saying that women should wear a veil. This hymn 8.33 is about Asanga who became a female due to curse.

Cast your eyes downwards, and don't look up. Keep your feet closer; let not anyone observe your back side, for from having been a Brahma you have become a female.

Indra is advising Asanga not to look upwards but look downwards. He also advises him to keep both of his feet very closer without leaving much gap. He also advises him let not anyone see your back side (कषप्लक - back side, translated by Griffith as garment) since Asanga has become a female.

Yes obviously. Indra is stating the rules of women which EVERY SINGLE WOMAN MUST OBEY, including in this part of Rig Veda where even a woman form which has emerged due to a curse definitely HAS TO FOLLOW THESE RULES. I am giving old translations from previous centuries or from village areas several years ago:

It means you will ALWAYS LOOK DOWN, keep your feat together & walk, BODY & FACE WILL BE BOTH HIDDEN, because you were Brahma's woman/female.

It means that it is a WOMAN'S DHARMA to look down instead of up... keep their feet together, cover their bodies etc. Here is another desi translation by Arya Samaj from 19th century:

Again it says WOMEN SHOULD COVER THEMSELVES. Now here is an old English translation from 19th century:

Cast down thine eyes and look not up. More closely set thy feet. Let none see what thy garment veils, for thou, a Brahman, hast become a dame [woman] (Translation by Ralph T Griffith)

He also says THIS IS WOMENS DHARMA. So every single woman must be covered except in rare circumstances. Here is a medieval Indian painting: 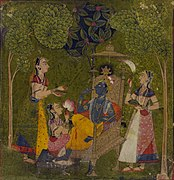 Here is ancient folk representation of Bengal and other part: 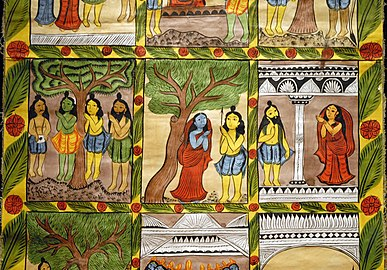 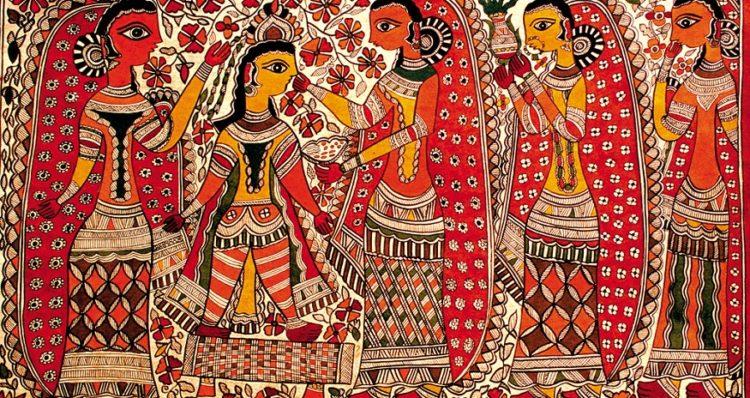 Valmiki Ramayana is dated to at least 4th century BCE it also has mention of headcovering in Yuddha Khanda 6, Sarga 111, verses 63-64. And this part is found in 6TH CENTURY COPY (oldest) of the Ramayana:

“O Lord! Are you not indeed enraged, in seeing me on foot in this way out through the city-gate, unveiled and come on foot in the way? O lover of your consorts! Look at all your spouses, who came out, with their veils dropped off. Why are you not getting enraged in seeing this?” Tr. K.M.K. Murthy

And Hindu marriage also has Ghoonghat as compulsory for women. So anyone saying that headcovering is not in Vedas or Indian culture is wrong.

Not the answer you're looking for? Browse other questions tagged history rig-veda women culture translation .

5
Are some of the words from Vedas still untranslatable?
5
What is the story of Indra restoring the vitality of Shashvati's husband?

24
Why don't men wear the likes of Mangal-Sutra to signify they are married?
13
Did Trisiras predict his own death in a Vedic hymn?
5
Where is the Vedic verse quoted by the Brihadaranyaka Upanishad about Brahman entering the body as a bird?
13
Are these verses from Garuda Purana and Brihadaranyaka Upanishad asking men to beat women? If not, how should they be interpreted?
15
Are there other interpretations of RV I.154 that confirm or refute Jiva Goswami's interpretation that the Supreme Abode of Vishnu is actually Goloka?
2
Is the concept of one Ishwara present in Vedas? Authenticity and Ancientness of Purusha Sukta