Which chapter in Skanda Purana contains the greatness of Ramayana?

Is there any conversation in Skanda Purana between Narada and Sanatkumara about the greatness of Ramayana?

If yes, then what is the number and name of the chapter?

Yes, there is supposedly a section called Uttarakhaṇḍa of the Skanda Purāṇa that purportedly contains what is called the Rāmāyaṇamahātmyam. The Valmiki Ramayana published by Gita Press Gorakhpur has this mahatmya at the beginning of the book. According to it, this is a conversion between Narada and Sanatkumara describing the greatness of hearing Ramayana, fitted into 5 chapters:-

Refer in Hindi : The Valmiki Ramayana by Gita Press containing the Rāmāyaṇamahātmyam 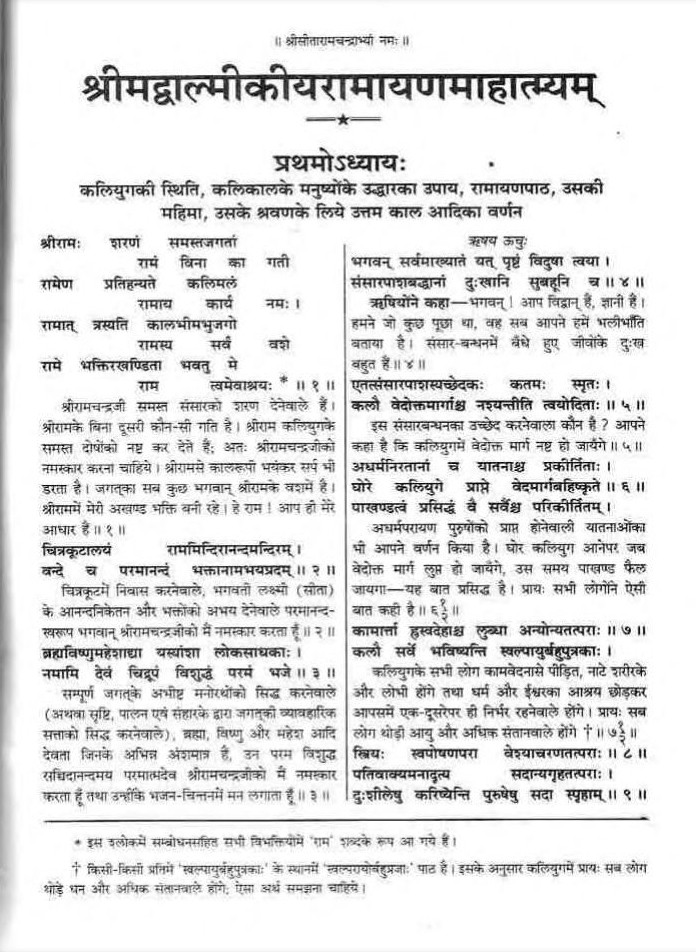 Now one must wonder why words such as ‘purported’ and ‘supposed’ have been used above: the Skanda Purana available today is composed of 7 khandas, in which this Uttarakhaṇḍa finds no place. Even the Skanda Purana by Gita press doesn’t have this mahatmya or the Uttarakhaṇḍa. It is said that another name for the Brahmottarakhaṇḍa is Uttarakhaṇḍa but that too doesn’t contain this mahatmya. We must remember Skanda purana is a collection of various almost disconnected manuscripts and hence this text must be part of a khanda not included.

Not the answer you're looking for? Browse other questions tagged ramayana skanda-purana .