Why did gopis spend their time with Sri Krishna?

Why did the gopis hang out with Krishna? Was it because they were romantically attracted to him?
Was it because he was charming, or was he good looking (handsome) or did he possess high masculine energy that gopies found attractive?
Or were there other reasons?

Gopis were attracted to Krishna because Krishna avatar was to attract people out of the worldliness. The word "Krishna" itself means "All-attractive"

(1) The son of Vyâsa said: 'Even though Krishna was the Supreme Lord, He, resorting to His inner potency [see yoga-mâyâ], decided to enjoy those nights in autumn when He saw the jasmine flowers blossoming. (2) The king of the stars [the moon] at the time painted with his action the face of the east red, thus giving comfort to all who longed for him, just like a lover approaching his beloved ends her grief when he after a long time shows up again. (3) Krishna saw how the kumuda lotuses opened to the full disc of the moon that glowed as red as the fresh kunkuma on the face of the goddess of fortune. He saw how the forest was reddened by the gentle rays of that light and sweetly played His flute that enchanted the minds of the [gopîs with their] beautiful eyes. (4) That song being heard by the women of Vraja awakened Cupid in their hearts so that each of them, unknown to the others, with her mind seized by Krishna and with earrings swinging in the haste, went to the place where He, her boyfriend, was situated. (5) Some left behind the cows while they were milking them, some abandoned in their eagerness the milk they had on the stove, while others went away without taking the cake out of the oven. (6-7) Some put aside the children they were feeding milk and dressed up without thinking of the service they would render to their husbands. Some left during their meals, some while they were oiling themselves, were smearing their bodies or were making up their eyes. Others went to Krishna with their clothes and ornaments in disarray. (8) They were checked by their husbands, fathers, brothers and other relatives but, enchanted by Govinda they, with their hearts stolen, did not turn around [to their duties]. (9) Some gopîs who did not manage to get away, stayed at home and closed their eyes to meditate on being [transcendentally] connected in love with Him [see footnote* and 10.1: 62-63]. (10-11) The intolerable, intense agony of being separated from their Beloved One drove away all bad-mindedness. At the same time their material virtue was also reduced to zero because of the joy they obtained from meditating upon Acyuta's embrace. Despite the fact that He was the Supreme Soul they thought of Him as their paramour. Getting His direct association though their karmic bonds were counteracted so that they immediately gave up their physical interest that is ruled by the natural modes.'

(12) S'rî Parîkchit said: 'They only knew Krishna as their beloved one and not as the Absolute Truth, oh sage. How could there for them being so mindful of the material affair, be an end to the mighty current of the gunas?'

(13) S'rî S'uka said: 'I spoke to you about this before [in 3.2: 19 and in 7.1: 16-33]. When the king of Cedi [S'is'upâla] could attain perfection even by hating the Lord of the Senses, what then would that mean for those who are dear to the Lord in the Beyond? (14) The personal appearance of the Supreme, Imperishable and Inscrutable Lord who, free from the modes, is the controller of the modes, is there to lead humanity to the perfection of life, oh King. (15) They who towards Him are constantly of lust, anger, fear, affection, unity or friendship will surely achieve absorption in Him. (16) You should not be surprised about this [fact] concerning the Unborn Supreme Personality, the master of all masters of yoga, Krishna, by whose grace this world finds liberation.

(27-28) S'rî Parîkchit said: 'In order to establish the dharma and to subdue the defiant souls, He, the Supreme Lord, the Controller of the Universe descended with His plenary portion [Balarâma]. How could He, the original speaker, executor and protector of the codes of moral conduct, behave so to the contrary, oh brahmin, by touching the wives of other men? (29) What did He, being satisfied within, have in mind with this no doubt contemptible performance, oh best of the vowed ones? Please dispel our doubt about this.'

(30) S'rî S'uka said: 'The transgression of dharma and the boldness that we [sometimes] see of mighty authorities, does not mean they are at fault. They are like an all-consuming fire [that is not affected by what it consumes]. (31) Someone not in control [of himself] must not even think of ever doing a thing like this. Being as foolish to act in such a way, means one's demise, one is not a Rudra who can drink the poison of the ocean [see 8.7]. (32) It are the words of the authorities that are true, their acts should only occasionally be taken as an example. What they do should intelligently be followed only in case they are in agreement with their words [see also B.G. e.g. 3: 6-7, 3: 42, 5: 7]. (33) Just as they who act egolessly do not benefit from the good acts they perform, they neither will suffer any disadvantage when they act contrary to the virtue. (34) How can we in relation to the Controller(s) of those who are controlled - all the created beings, animals, human beings and denizens of heaven - speak in terms of right or wrong? (35) The sages [His representatives] whose karmic bondage has all been washed away by serving the dust of the lotus feet, are satisfied by the power of yoga and act freely, they never get entangled because of Him. In what sense could one speak of a state of bondage with those who act according to the wishes of Him who assumed His wonderful bodies [for their sake, see vapu]? (36) He who within the gopîs and their husbands, indeed within all embodied beings lives as the Supreme Witness, assumes a form in this world in order to engage in His pastimes. (37) In order to show His mercy to His devotees, He with assuming a humanlike body engages in [amorous] pastimes, hearing about which one becomes devoted to Him [see also 1.7: 10]. (38) The cowherd men of Vraja who were bewildered by the power of His mâyâ, were not jealous of Krishna. They all thought that their wives had stayed at their side. (39) Even though the gopîs did not want to, the sweethearts of the Supreme Lord, on Krishna's advise went home after that [endless] night of Brahmâ had passed.

The Bhakti Rasamrita Sindhu, in the southern division, first wave, verse #41 to 43, sril Roopagosvami explains the four sweetnesses (Madhuris) of Krishna, the all-attractive.

So, during the eternal pastimes in the mundane world, all the five categories of the gopis and other higher devotees got the chance (to spend time) and participate in the transcendental pastimes and the supreme exalted pastime, the Raas, along with Radha-Krishna and the Ashta-Gopis.

There are many sections of gopis. One among them was the Gopis in Radharani’s group of confidential associates of Radharani who are called are the Astha Sakhis: Lalita, Vishaka, Campakalata, Sudevi, Rangadevi, Tungavidya, Citra and Indulekha.

During the Rama Avatar, a group of rishis/ sages who were performing penances in Dandagaranya forest, were attracted towards Lord Rama and begged the Lord to accept them to be with Him. Lord assured them that He will accept them in His next avatar as Krishna, since it was not possible in Rama avatar. As assured, Lord gave them birth as girls during His direct avatar as Krishna and gave the status to them to have very close association with Him in Rasa Lila.

Now, some explanation from the vedic scriptures about the Gopis:

“I worship Govinda, the primeval Lord, residing in His own realm, Goloka, with Rädhä, resembling His own spiritual figure, the embodiment of the ecstatic potency possessed of the sixty-four artistic activities, in the company of Her confidantes [sakhis], embodiments of the extensions of Her bodily form, permeated and vitalized by His ever-blissful spiritual rasa.”

“In this context we will make our analysis according to the method described in Srila Rüpa Gosvämi’s Ujjvala-nilamani. There are two categories of gopis: the eternally perfect (the nitya-siddhas) and those who have become perfect by practicing bhakti-yoga (the sädhana-siddhas).

The sadhana-siddhas are of two categories: those who belong to special groups and those who do not.

‘It is understood that some of the gopis are personified Vedic literatures, while others are reborn sages, daughters of cowherds, or demigod maidens. But by no means, my dear King, are any of them ordinary humans.’ Here we are informed that although the gopis appeared to be human cowherd girls, they actually were not. Thus the contention that they are mortals is refuted.

“The daughters of cowherds, referred to here as gopa-kanyas, must be eternally perfect, since we never hear of them having executed any sadhana. Their apparent sadhana of worshiping goddess Katyayani in the role of gopis merely manifests their manner of playing like human beings, and the Bhägavatam narrates the account of this worship only to show how they had fully taken on the role of cowherd girls.

“That the gopa-kanya gopis are actually nitya-siddhas, eternally perfect devotees of the Lord, is established by a statement in Brahma-samhita (5.37)—ananda-cinmaya-rasa-pratibhavitab… proves that they are the Lord’s spiritual pleasure potency.

“ ‘Even though they were in the company of their cowherd husbands, by the power of Yogamaya the gopis remained unsullied by sexual contact with them; rather, they were situated in purely spiritual bodies that Krsna enjoyed. On the night they heard the sound of Krsna’s flute, their husbands tried to stop them, but by the merciful assistance of Yogamaya the sadhana-siddha gopis were able to go forth to their beloved, together with the nitya-siddha gopis. 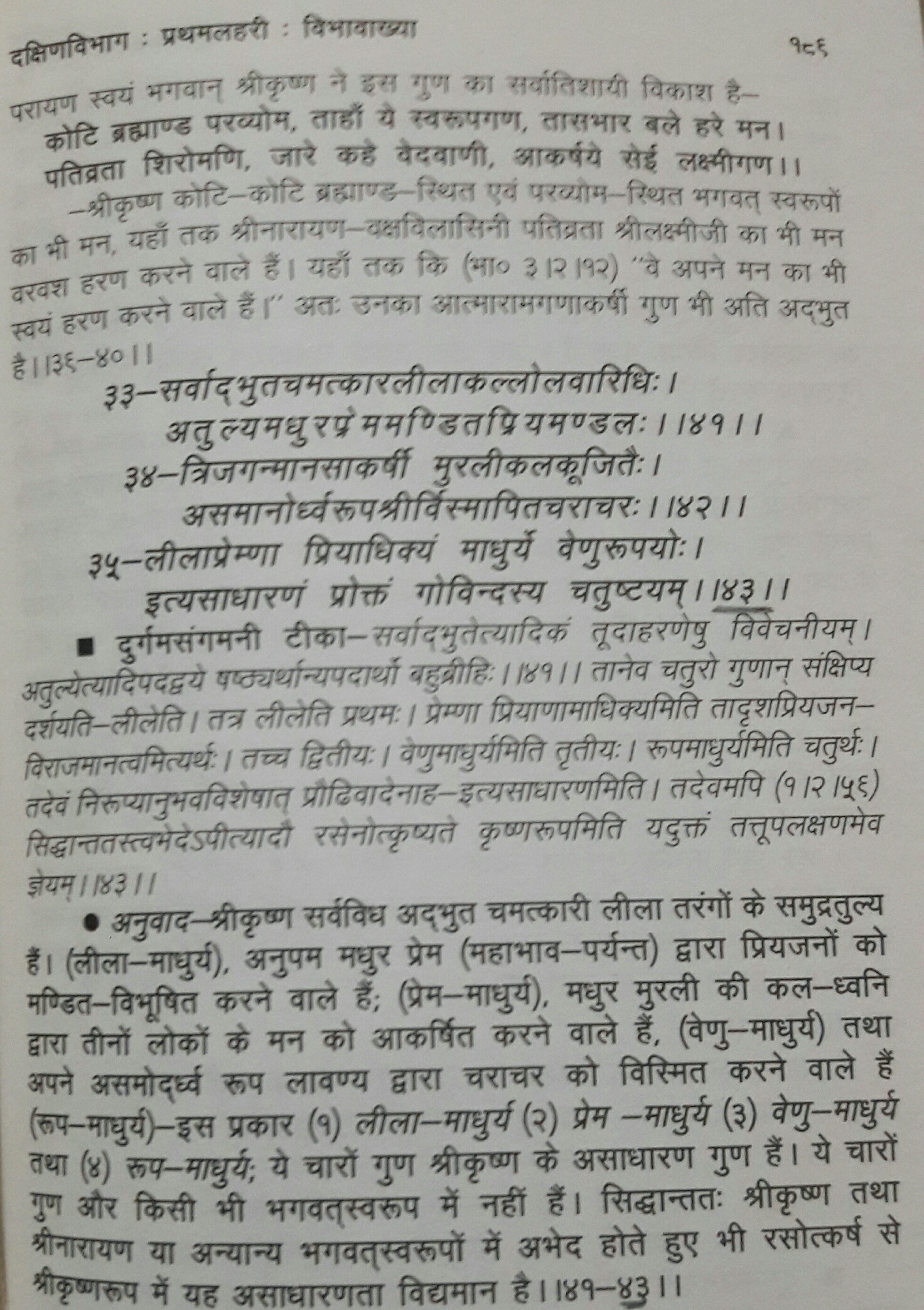 Not the answer you're looking for? Browse other questions tagged krishna .

13
Why does Vishnu have eight arms when Krishna and Arjuna go to see him?
4
Why Lord Krishna didn't marry any of the Gopies?
6
Who is Dasharha? And why is Krishna referred to as belonging to Dasharha's race?
10
How did Samba, Krishna's son, get relieved from Curse of Krishna?
12
Why did Shri Krishna vow not to take weapons in hand during the Mahabharata war?
5
Why Krishna wanted to support Pandavas even when both Pandavas and Karuavas were wrong in dice game?