Who will be target of Kalki?

By seeing today's world scenario, who do you think, will be target of Kalki. Because even today, we can see the different people having different paths. Is there, any reference, who will be actually target. (Off course those will be adharmi people, but any specific detail?)

Displaying His unequaled effulgence and riding with great speed, He will kill by the millions those thieves who have dared dress as kings.

The objective role and activities of "kalki" a avatara of Lord Vishnu that has yet to come is described in various Hinduism scriptures like puranas and itihasa. First of all let us see what Mahabharata is saying about who will be target of Kalki. It

Is mentioned in Mahabharata -Vana Parva-Chapter 191 by sage Markandeya that Kalki will destroy foreigners as well as dacoits and thieves and bandits.

Markandeya continued, 'Having exterminated the thieves and robbers, Kalki will, at a great Horse-sacrifice, duly give away this earth to the Brahmanas, and having established anew the blessed rectitude ordained by the Self-create, Kalki, of sacred deeds and illustrious reputation, will enter a delightful forest, and the people of this earth will imitate his conduct

Matysa Purana - Chapter 273.27 is telling us that at the time of Kalki avatara Yavanas will dwell here for sake of profit. All types of people will steadily detroit by following contrary way of life i.e. they will be adharmik. Kings will be untruthful and will be greedy. All these type of people who are following adharmik way , unrighteous way will be overpowered and will be killed by Kalki, no matter they are Mlecchas or Aryas. And only good people will remain.

The people will steadily deteriorate by adopting a contrary course of life , so along the kings will be greedy and speakers of untruth. All will be overpowered (killed) everywhere by Kalki whether they be Aryas or Mlecchas. 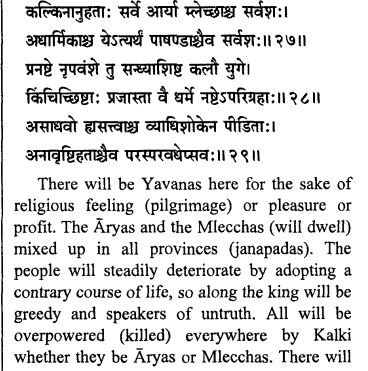 The Bhagavata Purana Skanda 10-Chapter 40- Verse 22 is suggesting that the target ogf Lord Kalki will also be meat eaters people who will be posing themselves as kings.

Obeisances to Your form as the faultless Lord Buddha, who will bewilder the Daityas and Dānavas, and to Lord Kalki, the annihilator of the meat-eaters posing as kings.

we find here mentioning that Lord Kalki will destroy the meat eater kings of the earth. i.e. we can say that the meaning of this is that he will end the rulers who will have indulged themselves in materialistic things.etc. and falsely considering themselves as kings and rulers.

So in conclusion Kalki would rid the earth of the unrighteous and implant dharma again and his target will be unrighteous people including people from outside of bharata as well as insiders i.e. Aryas and Mlecchas. All the people who are unrighteous including kings and thieves and bandits etc.
Share
Improve this answer
answered Jul 19, 2019 at 7:21

According to Kalki Purana, Kalki Avatara will kill Buddhists, Mlecchas and Yavanas.

The introduction of the Purana summarizes this as follows:

Among the upa-puranas or sub Puranas, the Kalki Purana is most sacred and widely respected. At the end of Kah-yuga, the Supreme Lord, Hari, will incarnate as Lord Kalki and kill all the mlecchas, yavanas, atheists, and Buddhists of the world that defy the Vedic authority. The pastimes of Lord Kalki are the subject matter of this literature, which is presented in story form. Exalted personalities can see everything, past, present, and future. For this reason, there is no fault in narrating these future events as if they had already occurred. The Kalki Purana consists of thirty-five chapters.

And, we can find the details of these battles against the Buddhists in subsequent chapters of the Purana.

Lord Kalki Conquers the Buddhists Who Opposed Him

Suta GosvamI said: Just as a lion, the king of the jungle, attacks a female elephant, Lord Kalki, the life and soul of all living entities, attacked the army of Buddhists.

Thereafter, a fierce battle took place between the Buddhists and Lord Kalki When the Buddhists became disheartened and began fleeing from the battle, Lord Kalki, acting as the commander-in-chief of His army, addressed the opposing warriors, who were injured in the battle, whose garments and armor were scattered here and there, whose hair had become loosened, and who were screaming loudly in pain: О Buddhists, do not run away from the battlefield. Stay here and fight to the best of your ability so that you will avoid the shame of being considered cowards.

Although Jina had been injured, he became enraged upon hearing Lord Kalki’s taunting words. After picking up his sword and shield, he rushed at Lord Kalki, who was sitting on His horse. In the duel that ensued, both fought with great enthusiasm so that even the demigods, who were watching from the heavens, became surprised to witness Jina’s skill in fighting.

The greatly powerful Jina pierced Kalki’s horse with his trident and then made the Lord fall unconscious by his onslaught of arrows. At this, the wicked Jina attempted to capture Lord Kalki, but was unable to pick Him up.

Lord Kalki had become so heavy that Jina could not even move Him and this fueled his rage. Being unable to take Lord Kalki prisoner, Jma finally took His crown and weapons and fled.

Indeed, the heavy breathing of Lord Kalki’s horse caused many opposing soldiers to fly into the sky and then fall down at distant places. Some of them fell upon the horses and chariots as they descended onto the battlefield.

Within a short period of time, Gargya and his associates killed six thousand Buddhist warriors. Bhargya killed ten million enemy soldiers with the help of his army, and Visala killed twenty-five thousand.

Suta GosvamI said. After killing the Buddhists and mlecchas of Kikatapura, Lord Kalki took their wealth and returned to His capital, along with His vast army.

Lord Kalki, the unhmitedly powerful protector of religious principles, next went to Cakratlrtha and took a ritualistic bath, according to prescribed procedure.

This is how Kali will be born

And commissioned by Time, a Brahmana of the name of Kalki will take his birth. And he will glorify Vishnu and possess great energy, great intelligence, and great prowess. And he will take his birth in a town of the name of Sambhala in an auspicious Brahmana family. And vehicles and weapons, and warriors and arms, and coats of mail will be at his disposal as soon as he will think of them. And he will be the king of kings, and ever victorious with the strength of virtue. And he will restore order and peace in this world crowded with creatures and contradictory in its course. And that blazing Brahmana of mighty intellect, having appeared, will destroy all things. And he will be the Destroyer of all, and will inaugurate a new Yuga. And surrounded by the Brahmanas, that Brahmana will exterminate all the mlecchas wherever those low and despicable persons may take refuge."

Kalki will conduct a horse-sacrifice

"Markandeya continued, 'Having exterminated the thieves and robbers, Kalki will, at a great Horse-sacrifice, duly give away this earth to the Brahmanas, and having established anew the blessed rectitude ordained by the Self-create, Kalki, of sacred deeds and illustrious reputation, will enter a delightful forest, and the people of this earth will imitate his conduct, and when the Brahmanas will have exterminated the thieves and robbers, there will be prosperity everywhere (on earth). And as the countries of the earth will one after another be subjugated, that tiger among Brahmanas, Kalki, having placed deer skins and lances and tridents there, will roam over the earth, adored by foremost Brahmanas and showing his regard for them and engaged all the while in slaughtering thieves and robbers. And he will exterminate the thieves and robbers amid heart-rending cries of 'Oh, father--' 'Oh, mother!--'O son!' and the like, and O Bharata, when sin will thus have been rooted out and virtue will flourish on arrival of the Krita age, men will once more betake themselves to the practice of religious rites.

The goal of Kalki is that he should restore peace and order to earth and inagurate a new yuga, the Satya yuga (age of truth) and he will continue to subjugate countries and kill the unrighteous people who are mlecchas wherever those low and despicable persons take refuge. He will later conduct horse-sacrifice in which, he will give away the entire earth to brahmanas. He will later roam around the earth and exterminate the thieves and robbers.

Not the answer you're looking for? Browse other questions tagged vishnu avatars kalki .

24
When will the Kalki avatar be born?
12
What is the story of Vishnu killing sage Bhrighu's wife Kavyamata?
8
How will the Kalki avatar look like?
13
Which sage will learn the Vishnu Purana at the end of the Kali Yuga?
6
Who will Kalki marry?
8
Will Lord Kalki be aware that He is Vishnu avatara?