Dharmosmat Kuladaivatam (translated by the source as, "Charity, Our Household Divinity") is the motto of Malayala Manorama, a leading Malayalam Newspaper. 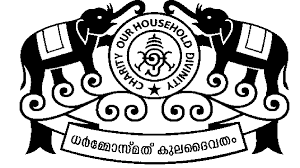 Is this phrase from a Hindu text?

The motto of Malayala Manorama is taken from the motto of the Travancore Royal family. It is inspired from the Mahabharata. 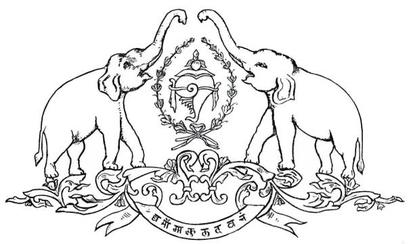 From page 36 Kandathil Varghese Mappilai, a monologue by C.J Roy

The insignia which accompanies the name Malayala Manorama was a contribution from Sree Moolam Thirunal, the then king of Travancore. Beneath it was the inscription dharmo' smat kuladaivatam which means Charity our- Household Divinity.

From page 45 of the same book,

With the Mahabharata aphorism dharmo' smat kuladaivatam as the declared motto of his newspaper, Varghese Mappilai was particular that Malayala Manorama should be deeply rooted in Indian culture that visualised a unified human race devoid of differences in the name of caste, creed and region.

Mahabharata speaks of Dharma in great detail. There are two parvas Anushasana parva and Shanti Parva dedicated for explaining duties to Yudhishtira by Bhishma.

About charity, see SECTION CXXXVII of Anushasanika Parva. Bhishma speaks of many kings and sages who ascended to heaven by performing charity.

7
Which scripture is the source of the chant 'Asatoma Sadgamaya Thamaso Maa Jyothir Gamaya…?'
9
Mythological character in the Hindu newspaper logo
0
Excerpt from Mahabharata?
7
What did humans do that Brahma took away their divinity?
2
From which Gayatri Mantra is this part taken?
3
Can someone identify the source this story which mentions about relativity of time