Can anyone throw light on ancient weights and measures mentioned in Hinduism scriptures?

I am interested to know about ancient weights and measures mentioned in Hinduism scriptures.

Can anyone throw light on this subject?

We find mention and explanation of traditional Indian units of measurement of mass or weight , Time , distance ,length etc. many a times throughout Hinduism scriptures like Itihasa Puranas .

Some of the names of measures of weights mentioned are -

Names of measures of time from the atomic level to kalpa is also mentioned in scriptures the names of some of them are -:

Keeping weights and measures were traditional job of Vaishyas during ancient times as described in Manu Smriti.

He should be acquainted with the manner of sowing seeds, with the good and bad qualities of the soil; he should know all kinds of weights and measures.—(330)

Measure Of length and breadth of land

In Valmiki Ramayana we find a unit called Yojana with which a land could be measured at length and breadth .

In the below commentary we find the author explaning Yojana and other measures of land. Yojana is an ancient measure of distance, where one yojana roughly equals to 8 to 10 miles. Its account is like this : 1 angula is 3/4 inch; 4 angula-s are = one dhanu graha - bow grip; 8 angula-s are = one dhanu muSTi - fist with thumb raised; 12 angula-s are = 1 vitasti - distance between tip of thumb and tip of last finger when palm is stretched; 2 vitasti-s = 1 aratni -s - cubit; 4 aratni-s = one danDa, dhanuS - bow height - 6 ft ; 10 danDa-s = 1 rajju 60 ft ; 2 rajju-s = 1 paridesha - 120 ft ; 2, 000 dhanuS-s = one krosha , and also called goraTa - 4, 000 yards ; 4 krosha-s = 1 yojana - thus one yojana is 9 to 10 miles. But the British Revenue measurement scaled it down to 5 miles, and all the dictionaries say that one yojana is 5 miles. But traditionally it is held as 10 miles. More info on these measures can be had from The Artha Shaastra of Kautilya - a republication of Penguin.

An basic unit of measurement of area called " Hasta" or "Cubit" for land measurement is also mentioned in Mahabharata- Sabha Parva-Chapter 3- Verse 23.

P.5 And the palace that Maya built consisted of columns of gold, and occupied, O monarch, an area of five thousand cubits.

One measure of weight called " Bhara ,भार" is found in Bhagavata Purana.

Each day the gem would produce eight bhāras of gold, my dear Prabhu, and the place in which it was kept and properly worshiped would be free of calamities such as famine or untimely death, and also of evils like snake bites, mental and physical disorders and the presence of deceitful persons.

Here Prabhupada is explaining the Bhara - : “Four rice grains are called one guñjā; five guñjās, one paṇa; eight paṇas, one karṣa; four karṣas, one pala; and one hundred palas, one tulā. Twenty tulās make up one bhāra.” Since there are about 3,700 grains of rice in an ounce, the Syamantaka jewel was producing approximately 170 pounds of gold every day.

This Krosha is said to be approximately 2 km of distance according to scholors.

Manusmriti is having one section solely dedicated to measures in connection with silver and gold for business transactions.

Lets see some of the verses -:

Four ‘gold-pieces’ make one ‘pala,’ ten palas one ‘dharaṇa’; and two ‘guñja-berries’ of equal weight should be known as one ‘silver-bean.’—(135)

Ten ‘dharaṇas’ are to be known as the ‘silver śatamāna’ (centimetre); and the ‘niṣka’ should be understood as four ‘gold-pieces’ in weight.—(137)

Similarly a measure of mass called Prastha is also mentioned in Mahabharata in famous story between a Mongoose and Yudhisthira at his Ashwamedha Yajna.

Ye kings, this great sacrifice is not equal to a prastha of powdered barley given away by a liberal Brahmana of Kurukshetra who was observing the Unccha vow.'

This prastha is also known as "ser सेर" a unit of very nominal measure of mass.

P. 23 constitute a day and night of mortals: thirty such days make a month, divided into two half-months: six months form an Ayana (the period of the sun's progress north or south of the ecliptic): and two Ayanas compose a year.

And in the subsequent verses .

We can see the approximate values of all the measures of masses provided in Manu Smriti. And here is a book Ancient Indian weights by Thomas, Edward Below is a table of the different weight units in relation to one another and their values . 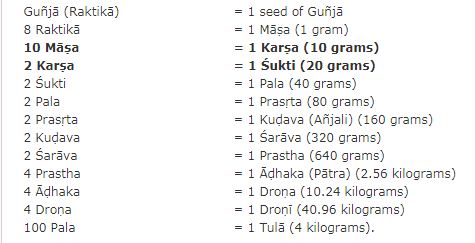 21
Did Hindu scriptures predict Muhammad and/or Jesus?
8
Which Hindu text generally describes the rules of Niyoga?
4
Ancient sages or Rishis (ऋषी) and Locations of their hermitages (आश्रम)
36
What are some online sources to get unabridged Hindu Scriptures or to learn Hinduism?
3
Description of seasons in Hindu Scriptures
8
Which was the ancient time when gods and men used to dwell together on the earth?
4
Mentions of the metal Mercury in Scriptures (other than in Ayurveda and Siddha and related books)
0
Where to find the full story of King Muchukunda?
5
Mentioning of firearms or cannons in Hinduism Scriptures?
3
Hydrogen & Oxygen mentioned in Vedas and Itihasas?