Why do Hindus believe in cremation instead of burial?

The other two major religions, Christianity and Islam both practice burial after death. What factors influence the Hindus to practice cremation instead?

In Hinduism, every jiva is made of five Mahabhootas, namely, Dhara (Earth), Nabh(Ether), Vayu(Air), Varuna(Water), Agni(Fire). After death, the body is supposed to disintegrate back into these many Mahabhoota.

Hindus believe that souls after living in the body for so long time, gets attached to the body and if left to rot on it's own or buried, will linger upon the vicinity. So, burning the body makes the soul depart to it's rightful place sooner than burial.

Also, Agni has a special status among the Pancha Mahabhootas (Five Elements) in being the purest of pure. All the remaining Mahabhootas become impure after they are used for cleaning. For instance, Water after being used to clean filth, itself becomes impure and cannot be used; Air after being inhaled becomes CO2 and cannot support life. Similar things hold for Earth and Ether.

Fire is the only exception. Fire, even after being used to burn and purify, remains pure and potent. Thus the concept of Agni Pareeksha, Agni Saakshi etc.

And for this reason, Fire is used to liberate the body back to its origins in the Pancha Mahabhootas.

Adding to @A runnigMind's answer:

Cremation of the body reminds that the body is not important but the Atman is. Body perishes but Atman exists eternally. This is in contrast with say Christianity where people would go to kingdom of heaven in their material bodies and hence do burial to 'put the bodies to rest' till judgement day. In Hinduism it's the atman which can attain Moksha and not the body. Body represents ego/ahankar and burning it is like letting go. This is the philosophical basis of Cremation which many sects adhere to.

Coincidentally or deliberately, cremation saves space on land. I've heard of cities running out of space to build cemeteries in the west. Ancient Hindus might or might not have had this insight.

The theological reason for the question is given by Vineeth Menon, and as mentioned here mainly pointing on the sociological and scientific reasons which were known to our ancestors before ages.

Hinduism(Sanathana Dharma) is mainly a culture than a religion which is followed in India. The culture of one region is based on that region's weather conditions and nature. Cremation of bodies is a real example of this fact. Soil in India is wet type(compared gulf countries and European countries) and have more water in it. If dead bodies are buried under soil, the bio degradation take place and body fluids come out. Since the soil is wet enough, it is very much sure that those fluids will mix up with the water in soil and hence the drinking sources like wells and rivers will get polluted. This will lead to diseases.

Also cremation helps in not wasting the land. After cremating the bodies, there is practice in which some grains(nava danyas,i.e 9 grain seeds) are put in the place of cremation(It is still followed in Southern part of India, not sure about other parts). This practice is a straightforward way in pointing out the importance of agriculture in Hinduism(or in Indian culture). This is practiced to make sure that the agricultural land is not wasted. The same land is again used for agricultural purposes. So in this culture there are no cemeteries, the same land again used for the farming.

All these are written in the Smrithies(example for Smriti is Manusmrithi and I don't know in which specific smrithi this practice is mentioned.), which contains the code of conducts to be followed by people following a culture. Each Smrithi is followed in a region for a particular period according to it's nature and weather conditions.. Smrithies are allowed to edit as needed(according to change in weather , living style, etc.) So that means the rituals and habits could be changed according to Hindu culture.

Also it will be helpful to refer about 16 samskaras to be followed in one person's life. From wikipedia: The samskāra (sanskaar) are a series of sacraments, sacrifices and rituals that serve as rites of passage and mark the various stages of the human life and to signify entry to a particular Ashrama (i.e. stage of life). The answer of the question is related to the 16th one, Antyeshti. see the link.

So according to Hindu culture, particular region or country can adopt their way of burying according to the nature and weather conditions. This is making a good sense. In Middle East countries/gulf most of the parts are deserts. Hence the religion originated from there, i.e. Islam follows this method of burying which is suitable for their nature. Similar conditions would have affected the practice of burying among Christians. So in conclusion burning of body may not be necessary in other countries based on weather conditions. But as India have it's sets of weather features, our ancestor's made a set of rules which suits for the country. They were also successful in implementing their ideas by forming particular customs which hides scientific facts behind them (As mentioned above, Antyeshti among Shodasa Sansakara is one of them). The burning of dead bodies is one of the best example for this.

In addition to Vineet Menon's comments, that Agni (Fire) is the purest element of the 5 elements (Mahabhutas) that is accessible to man - (The other begin Ether (Nabha or Akasha) is intangible and is capable of sustenance and not incineration or destruction.), there is also another reason to it, in that, cremation is the best possible way to symbolically signify the transformation of the Gross (or Sthula Sharira attached to the Annamaya Kosha) to the Subtle (or Sukshma Sharira attached to the Pranamaya Kosha). This is also the reason camphor is lit for mangala aarathi in temples, where the camphor signifies the sthoola and the sublimation (disappearance) of the camphor when lit by fire (which is the 'Chit' or consciousness) signifies the sookshma.

And as rightly put by Vineet, realized souls and children devoid of ego (ahankara) are buried and not cremated.

By the way, the Holy Bible does say "From Ashes to Ashes and Dust to Dust". - Food for thought!

I agree with the current answers, I just wanna add little more information.

they cremate out of common sense.

Cremation became a practice because of the diseases the scavengers bring as there population increase in the burial areas pollution of water was another issue as well remembering the body leads to more trauma. The best option was cremating the body with rituals that will extinguish doubts and let people live happily. Beliefs are the recommended strong habits if someone doubts it he has to live a lifetime again searching for answers such as taking bath is a ritual performed by many but any explanation of the same practice can be to ward off skin diseases. Practice it understand it enquire about it but do believe the sages who wandered the earth for a purpose named unity and divinity.

One of the reason and explanation why Hindus believe cremation of the dead is also given in Brihadaranyaka Upanishad - Adhyaya 5 - Brahmana 12 - " Tapo Brahmanam" .

It's said in the upanishad that cremating a deceased by others is equal to excellent austerity or "Tapa" performed by the dead person.

Its said that when people keep the dead in cremation fire , its similar to Agni- Pravesha (entering into fire) and is like performing excellent austerity by him. And the person who knows that wins highest world.

This is indeed excellent austerity that man after death is placed in fire . He knows as above wins an excellent world.

explanation of shankaras commentary - The concept of cremation is a belief that as Agni makes all things pure by burning the impurities in substances , similarly Agni burns all the evil of dead person when placed on fire i.e. when he is cremated .

And this removal of evil of the dead by agni is similar to performing excellent Tapas by the dead. And that helps him in achieving supreme world , if he knows about this. And this is one of the reason why Hindus perform cremationof the dead.

And here are the screenshots of Gita Press hindi translaton and explanation. 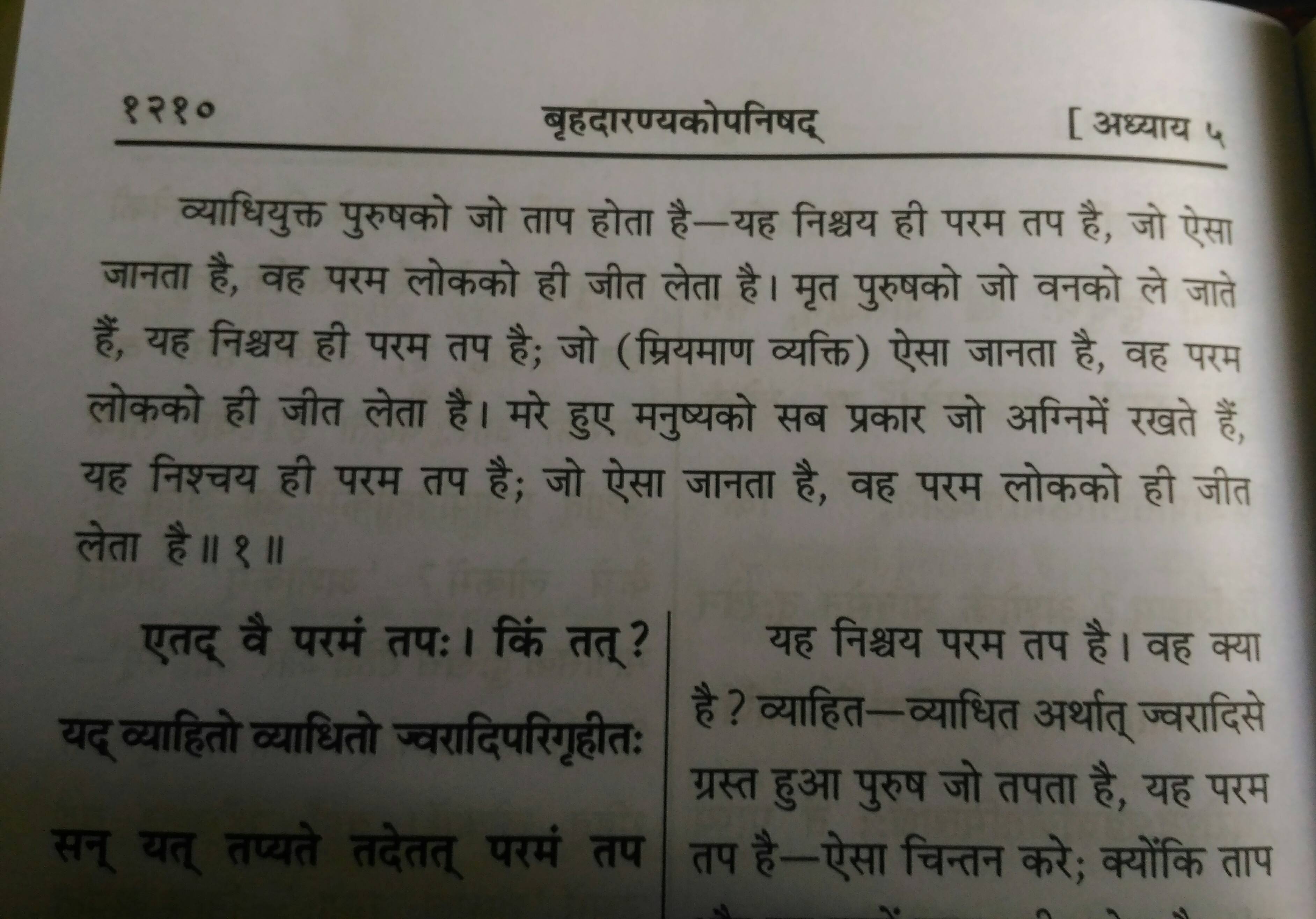 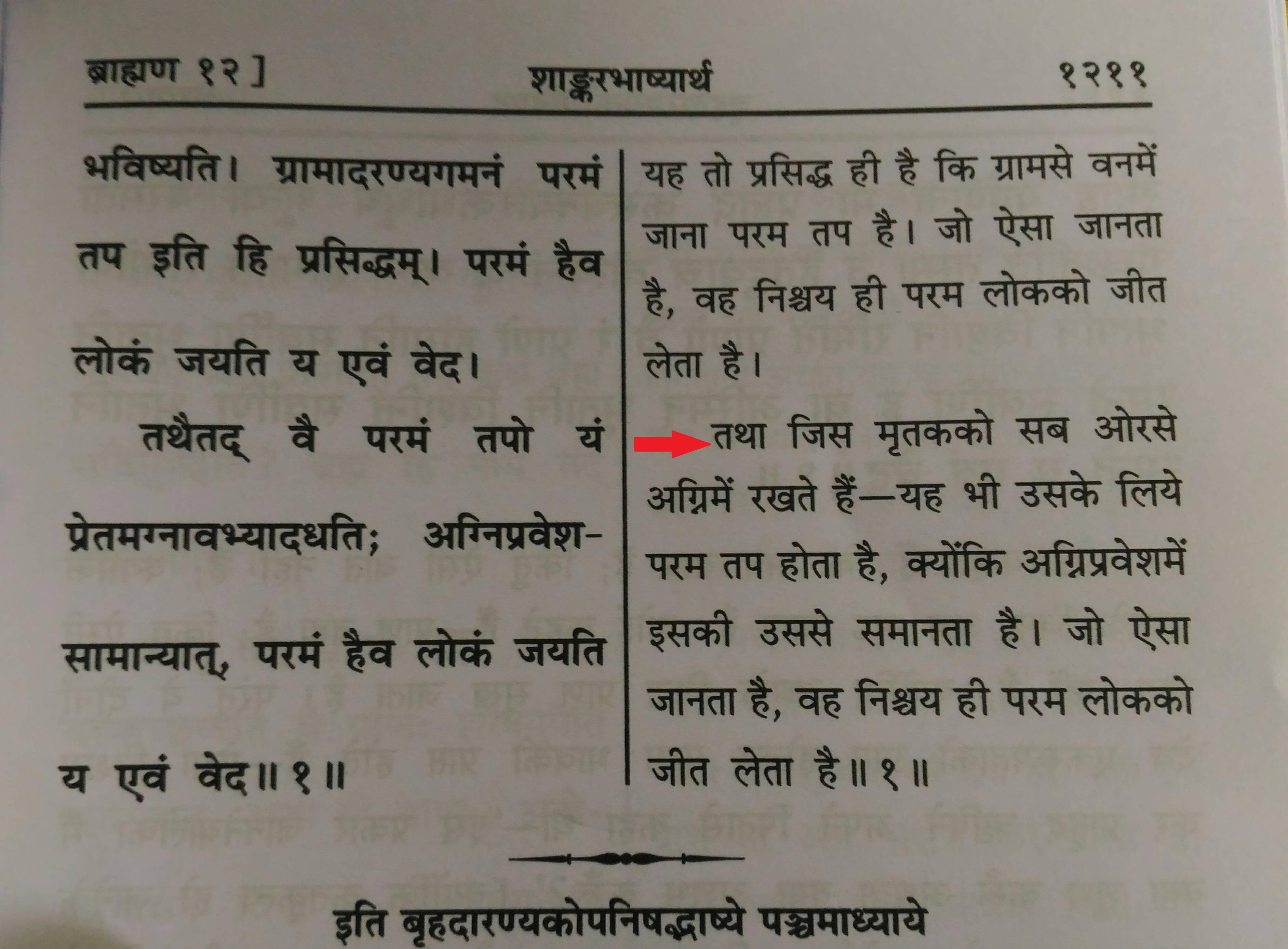 Not the answer you're looking for? Browse other questions tagged belief death cremation .

14
What is the significance of 3, 16, or 41 days after the death?
11
According to Ramayana/Mahabharat why is Agni (Fire) different from the other pancha bhoota?
3
Is it true, only married people are cremated, non-married people are buried?