Is there any temple where Shiva is worshipped in the form of a pillar without pedestal?

As mentioned in What does linga literally mean in Shiva Linga? post,

The pedestal shaped as the vagina and the phallus fixed therein are symbolical of the eternal creative forces personified as Śivā and Śiva.

The above mentioned form is found in most of the temples.

But before the story of Hāṭeśa, Shiva's Niṣkala (nameless and formless) aspect was just like a pillar which appeared in the Brahma-Vishnu conflict.

Is there any temple where Shiva is worshipped just as a pillar without any pedestal shaped as the vagina?

There are Pancha (5) aaraamas (Siva Temples) in Andhra Pradesh. The Sivalingas at these temples are made from a single Sivalinga. 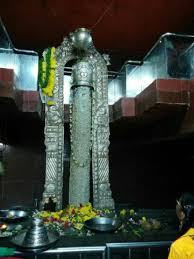 Not the answer you're looking for? Browse other questions tagged shiva temple worship shiva-lingam .

1
What does linga literally mean in Shiva Linga?

55
Why is Shiva primarily worshipped in a linga form?
9
What is the story of tortoise which is just in front of Nandi in Lord Shiva Temple?
20
What is the difference between a Shiva temple and a Jyotirlinga?
11
Do the Brahmanas of the Rig Veda mention Brahma and Vishnu's contest?
10
Is Taj Mahal really a Shiva Temple in the past?
12
Where is it mentioned that Krishna and Rama Worshipped Shiva Lingam?
16
Is there any temple where deities are Brahma, Vishnu and Maheshwara?
2
Has Lord Shiva worshipped Lord Vishnu to incarnate in any form?