Why was Surya killed by Lord Shiva?

I heard of an incident in which Suryadev was once killed by Lord Shiva. Can somebody explain to me what is this incident and what Surya's mistake was? And also, please let me know how he became alive again. Please also include the source reference for this story.

The story of Shiva (temporarily) killing Surya the sun god is told in the Ganesha Khanda of the Brahma Vaivarta Purana. (See page 349 here.) As I discuss in this answer, one of the most prominent incarnations of Vishnu in ancient times was the sage Narayana, son of Yama god of death and twin brother of the sage Nara. (Nara and Narayana were the prevous births of Arjuna and Krishna.) In any case, in the Brahma Vaivarta Purana's account, the sage Narada asks Narayana about the birth of Ganesha, and then he asks how the remover of obstacles could have suffered such a big obstacle as losing his own head:

If Ganesha is Vighnahara or Vighnesha, that is, the one who removes all impediments, how came he to incur an impediment? Why did he have his head chopped off?

Narayana responds that it was due to a curse that Shiva had incurred. Once Surya the sun god tried to kill the evil Rakshasas (demons) Mali and Sumali. But these Rakshasas were devotees of Shiva, so Shiva came to their rescue, piercing Surya with his trident and (temporarily) killing him. The Sun immediately went dark, and the sage Kashyapa, Surya's father, was furious. (Kashyapa is the son of Marichi, one of the mind-born sons of Brahma, and Surya is one of the Adityas, the sons of Kashyapa and his wife Aditi.) Shiva restored Surya's life to pacify Kashyapa, but Kashyapa still put a curse on Shiva that he would kill his own son just as he had killed Kashyapa's son:

Mali and Sumali were two demons who were devoted to Shiva. The sun-god Surya did not like the demons and was about to kill them. The demons prayed to Shiva and Shiva intervened. He struck Surya with a trident and this made the entire world plunge into darkness. Surya was the sage Kashyapa's son and so, for this act, Kashyapa cursed Shiva. "Just as you pierced my son's chest with a trident, your son's head will be chopped off one day," said Kashyapa.

By the way, as I discuss in this answer, the Rakshasa Sumali had a daughter named Kaikeshi, who married the sage Vishravas. Together they had several children, including Ravana, Kumbakarna, and Vibhishana. So it's possible that if Shiva had allowed Surya to kill Sumali, Ravana might never have been born!

One note of caution: references to Ganesha in ancient Hindu scripture are few and far between, since Ganesha only rose to popularity later on, so there is a possibility that this may be an interpolation in the Brahma Vaivarta Purana. (I raise a similar issue in my answer here concerning a passage in the Shiva Purana.)

Suryadev was angry on King Vrisadhvaja (father of Tulas) for ignoring other Gods and only worshiping Shiva and cursed him that he word lose all his wealth and prosperity. When Shiva heard this curse he got angry on Suryadev for cursing his greatest devotee and ran behind him to kill him. On this Suryadev got afraid and along with his father Kasyapa went to Vaikuntha. Due to being afraid and with all the terror their throat started drying out (this is where surya was about to die), they went to the supreme god Narayana and he granted them abhaya (no fear).

Some reference said that Once Surya Deva showed he the most powerful Deva in the world. Without Him whole world is priceless. Then His son Shani Deva tried to calm Him and not present Him as great than Lord Shiva. But Surya Deva was so angry that time. Even he stopped his work to give light to the world. Without Surya Light whole world was going to dark space and Asuras are getting powerful. Than Shani put a Rudraksha on the Surya Planet and worshiped to Lord Shiva. Than the Rdraksha give most brighter light than Surya Light. Then Devraj Indra suspended Surya Deva from Divinity and Surya came to a Jangal and He saw two person who worshiped to Lord Shiva. Then Surya tried to kill those two Asuras Mali and Sumali. But they had a boon from Shiva that who would tried to kill them Shiva will totally destroy him. Thats why Shiva killed Surya for attacking to the Asuras. After geting this news to Surya's father Rishi Kashyppo cursed Shiva, Oneday The Trishul will kill Shiva's son. 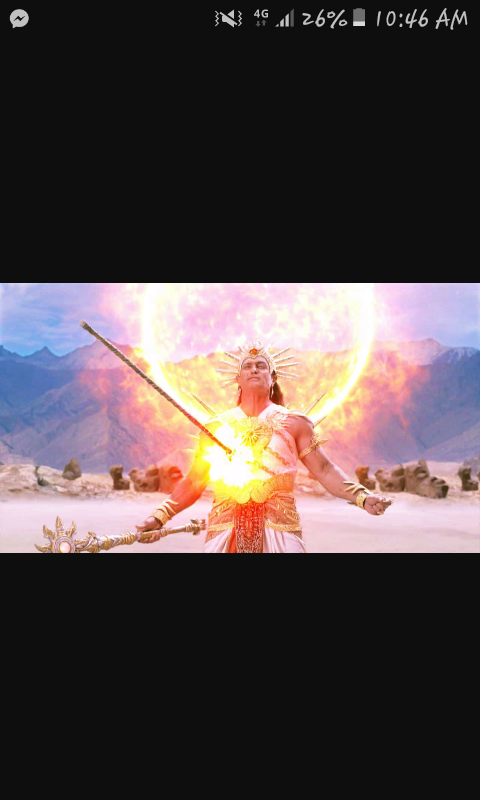 This is how suryadev was killed(temporarily) by mahadev because suryadev went to rescue his wife devi chaya from mali and sumali.who had boon from mahadev that if someone tries to kill them mahadev will kill the person who is trying to kill them. So when suryadev tried to kill them mahadev killed him. Then devi sangya went and called suryadev's father(Rishi kashyap). And when he saw his sons dead body lying down he became curious and cursed mahadev the way you have killed my son with your trident.. you yourself will kill your son with the same trident of yours. Mahadev accepted the curse. And after that devi chaya pleased mahadev and decided to give her life in exchange of suryadev's. Than mahadev was pleased and gave life to suryadev but he did not take devi chaya's life as well.

Not the answer you're looking for? Browse other questions tagged shiva ganesha surya .

1
Why God Shiva used trident on Kashyapa's son? and why could not he save his own son (Ganesha) from curse?
14
How did Ravana get the golden city of Lanka?
11
Why didn't Lord Shiva realize that he was beheading his own son?
11
Origins of God names - Lord Siva and Lord Vishnu
10
Story of origin of the Godavari river?
11
What is the story behind Lord Rudra (Shiva) holding the skull of Indra?
9
Why Maharishi Bhrigu was so powerful?
5
Why Marichi is called Maruts?

21
Why did Lord Shiva fight with Lord Vishnu?
11
What is the story behind Lord Rudra (Shiva) holding the skull of Indra?
16
Which scriptures other than the Ramcharitmanas mention that during Shiva Parvati marriage ceremony Ganapaty was worshipped?
3
Exact relation between lord shiva and goddess Kali?
5
Did Lord Vishnu pray to Lord Ganesha? If yes, in which scripture is it written?
4
Does one eye of Lord Shiva always remain open?
5
Is it true that lord Vishnu gave his own eye to lord Shiva?
4
Which Purana talks about the incident of Lord Shiva saving The Sage Markandeya?