What is validity of different translation of word" Mamsah"?

I have come across the many translations where "Mamsah" is translated as fruit or as root vegetable. As I am attaching here. 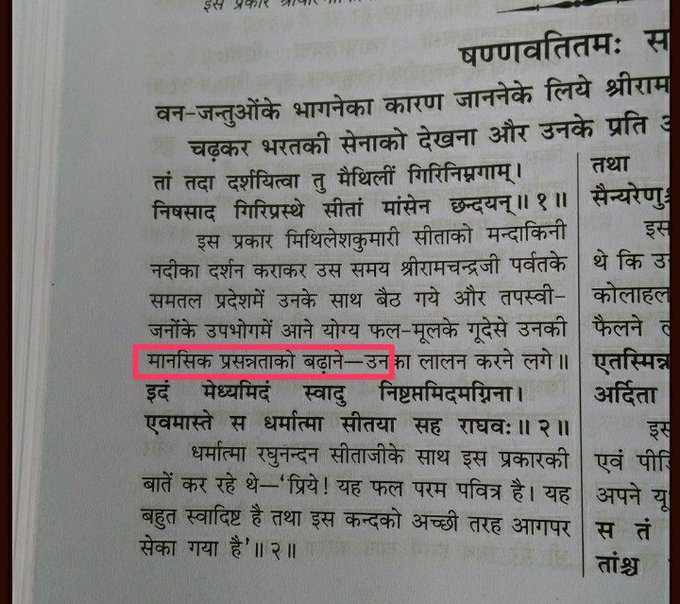 The original translation As per my belief should be

Having shown to Sita the mountain-river Mandakini and gratifying her with meat, Rama sat on the mountain slope. Righteous Rama was seated in Sita's company and remarked saying "This meat is sacred. This is savoury roasted in fire". (Valmiki Ramayana, Ayodha Kanda 96:1-2)

Why are Hindus vegetarian? What is the real meaning of the word 'mamsah' (मांसः) or meat?

First off, as Sheldon Pollock points out in his translation of Ayodhyākāṇḍa, the two verses you quote in your question have been removed from the Critical Edition of Vālmīki Rāmāyaṇa.

1. In order to establish a reasonable transition between sargas, the SR [Southern Recension] inserts before this verse four lines (2091*), in which Rāma, having shown Sītā around the mountain, sits down on the slope and gives her cooked meat to eat (thus attempting also to account for the fire mentioned in 87.21ff, and verse 10 below, cf. note on 89.19; it seems more likely that the fire is the one on the sacred altar, cf. 93.11 and 23, though whether one may unceremoniously douse a ritual fire, as Lakṣmaṇa will suggest in verse 10 below, is questionable).

And even if those were present in the original Rāmāyaṇa, medhya and māṃsa together usually mean "fresh or pure meat" and not "pulp made out of fruits and roots":

Having shown Mandakini River in that manner to Seetha, the daughter of Mithila, Rama set on the hill-side in order to gratify her appetite with a piece of flesh.

Rama, whose mind was devoted to righteousness stayed there with Seetha, saying; "This meat is fresh, this is savoury and roasted in the fire."

Rama showed Sita, the princess of Mithila the river Mandakini flowing in the mountain, gratified her by offering meat (to eat) and sat on the mountain slope.

Offering Sita several kinds of preparations to eat, righteous Rama, seated in her company remarked, This meat is savoury, this meat roasted on fire is sacred.

Now, to answer your underlying question:

So now the question is why this particular translator chooses फल-मूलके गूदेसे (pulp made of fruits and roots)?

There are several commentaries/commentators of Vālmīki Rāmāyaṇa and one particular commentator, Vaṃśīdhara Śivasahāya, consistently uses fruits and roots instead of meat in his commentary, Śiromaṇi, abbrev. as Cr below.

And the Gita Press translation which you cite in your question appears to follow the Śiromaṇi commentary throughout. One possible reason why Gita Press used this commentary over others is, its founders (Jayadayal Goyandka and Hanumanprasad Poddar) wanted to promote vegetarianism in India and among Hindus.

To illustrate the extent Śivasahāya (Cr) goes to portray Rāma as a vegetarian prince, let's look at this verse:

79. "meat" medhyam: This follows Ck, though the word is rarely used in this sense: alternatively, and perhaps preferably, we should read with T1, 2, G1, 3 medhyāṃs, "pure," that is, animals, those fit to consume; cf. 49.14, medhyān mṛgān, so in 50.16. In the NR substitution (1098*) the brothers kill only one beast (a dappled antelope), light a fire, cook, and along with Sita eat the meat, and then retire for the night beneath a tree.

Cr's gloss displays an amusing perversity: "'He struck great animals,' that is, he knocked them about in fun and then took 'pure' food, fruits, etc."

The correct meaning of mamsa is fruit pulp. The flesh word is unfit in ramayana because ram was a pure vegetarian.

"I shall live in a solitary forest like a sage for fourteen years, leaving off meat and living with roots, fruits and honey".

The next verse makes it clear that ram was a vegetarian.

Now if ram was not eating nonveg, you can't translate mamsa as flesh. V.S Apte dictionary gives the meaning of this word as fruit. 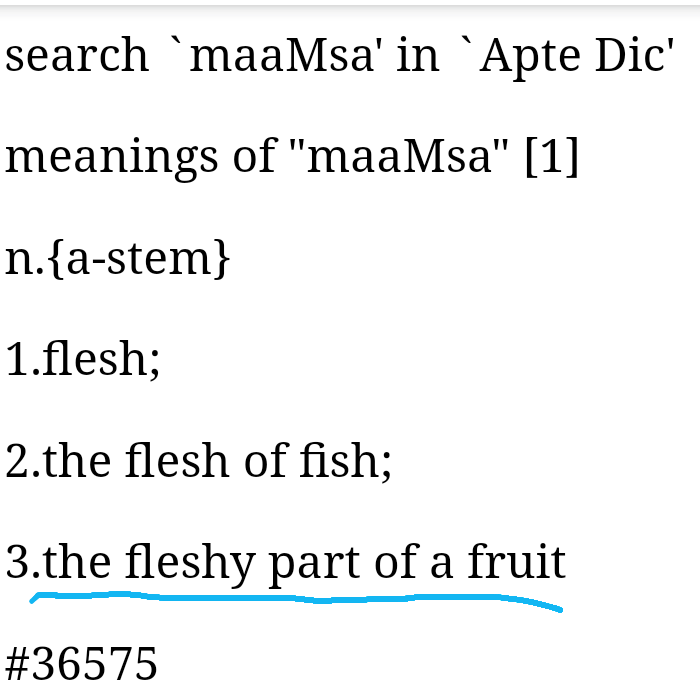 The meanings of mamsa is dictionary and brahmin is quite different but no one is no one related to nonveg.

aitreya brahmaNa - book 2-chapter 1: The chaff and straw of the rice of which it consists are the hairs of the animal, its husks the skin, its smallest particles the blood, all the fine particles to which the rice is ground represents the flesh and whatever other substantial part is in the rice are the bones

shatpatha brahmaNa 1.2.3.7 - 1.2.3.8: 1:2:3:7 It entered into this earth. They searched for it, by digging. They found it (in the shape of) those two (substances), the rice and barley: therefore even now they obtain those two by digging; and as much efficacy as all those sacrificed animal victims would have for him, so much efficacy has this oblation (of rice &c.) for him who knows this. And thus there is in this oblation also that completeness which they call 'the fivefold animal sacrifice.' 1:2:3:8 When it (the rice-cake) still consists of rice-meal, it is the hair. When he pours water on it, it becomes skin. When he mixes it, it becomes flesh: for then it becomes consistent; and consistent also is the flesh. When it is baked, it becomes bone: for then it becomes somewhat hard; and hard is the bone. And when he is about to take it off (the fire) and sprinkles it with butter, he changes it into marrow. This is the completeness which they call 'the fivefold animal sacrifice.'

15
Why are Hindus vegetarian? What is the real meaning of the word 'mamsah' (मांसः) or meat?
1
Do scriptures specify how animals should be killed during the sacrifice?