What does the Suvarna Gharma Anuvaka of the Taittiriya Aranyaka mean?

As I discuss in this question, the Srimad Bhagavatam contains the Uddhava Gita, a discourse similar to the Bhagavad Gita between Krishna and his relative Uddhava on the proper way to live one's life. And in the course of telling Uddhava how to worship him in idol form, Krishna says this:

The worshiper should bathe the Deity every day, as opulently as his assets permit, using waters scented with sandalwood, uśīra root, camphor, kuṅkuma and aguru. He should also chant various Vedic hymns, such as the anuvāka known as Svarṇa-gharma, the Mahāpuruṣa-vidyā, the Puruṣa-sūkta and various songs of the Sāma Veda, such as the Rājana and the Rohiṇya.

In this question I asked about the Mahapurusha Vidya, but now I'm interested in the Suvarna Gharma Anuvaka. This book claims that the hymn is lost, but I found it in the Taittiriya Aranyaka of the Yajur Veda (see Anuvaka 3-11-1 on page 50 of this PDF):

"sarve vedā yatraikaṃ bhavanti" means "where all the Vedas become one".

The rest is incomplete. I'm not an expert. I've just collected references for now; will come back and try to make sense of it later. 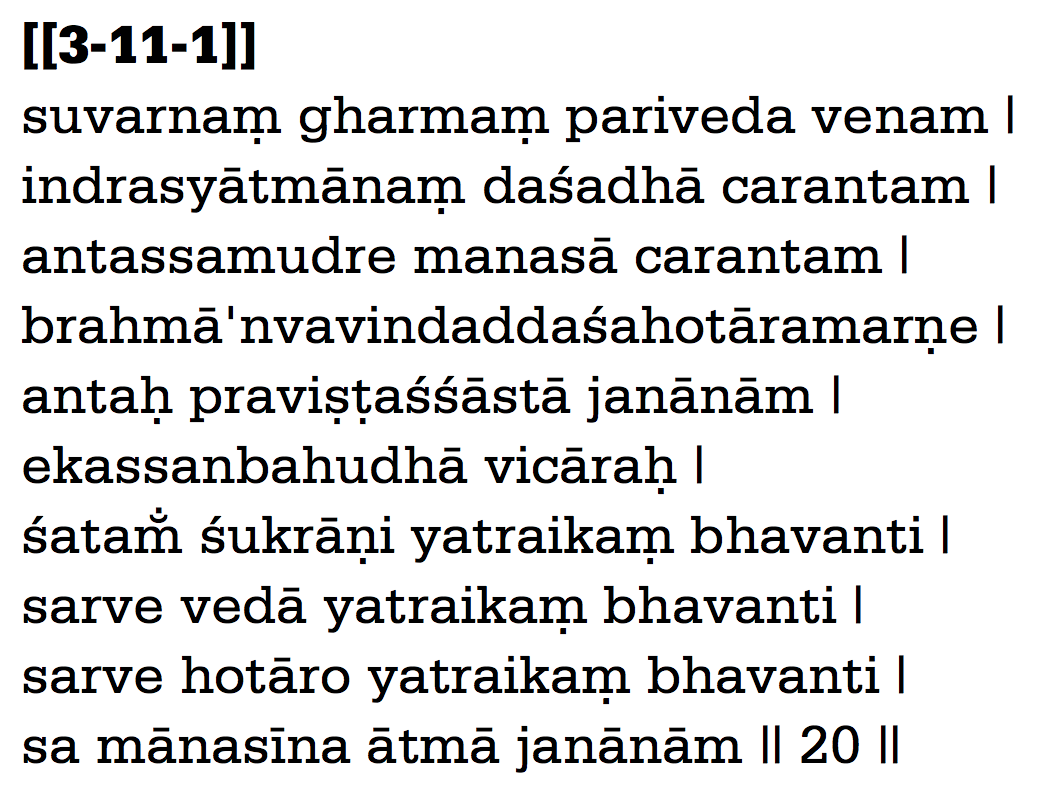 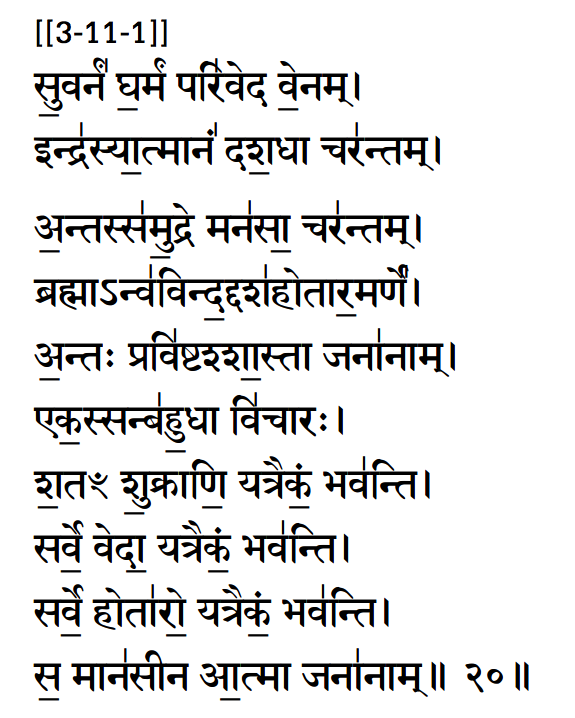 9
Is killing justified in the Bhagwad Gita?
7
What are hymns chanted for abhishekam?
11
How did Lord Dattatreya acquire the knowledge of Yoga?
3
What is Bhavabhuti's original Sanskrit quotation "Time is infinite,earth is huge"?
1
What is the Mahapurusha Vidya recommended in the Uddhava Gita?

18
What form did Vishnu take in the Battle of Ten Kings?
1
What is the Mahapurusha Vidya recommended in the Uddhava Gita?
8
Does the Taittiriya Upanishad quote a hymn of the Sama Veda?
10
What is the significance of frogs in the Vedas?
8
Who is the seer of the Nila Sukta, the Vedic hymn to Vishnu's wife Nila Devi?
3
What is the difference between Prajapati and Parameshthin Prajapatya, and which one is Brahma?