Stories about Rudrani and meaning of Hreem

Can you please give me some rare and interesting stories about Rudrani in particular? Also why is Devi said to be the embodiment of Hreem?

One can find stories of Goddess Rudrani's birth and deeds are mentioned in Varaha Purana.

Describing the reason behind the manifestation of 'TriShakti' (Three goddesses manifesting from the bodies of Brahma Vishnu and Shiva), Lord Varah told Prithvi--- There lived a mighty demon named 'Andhak' who used to torment the deities. After being driven out of the heaven all the deities sought lord Brahma's help. Lord Brahma took them to Lord Shiva and requested him to find some solution to the miseries of the deities. Lord Brahma then meditated on the form of Vishnu who appeared instantly.

The powers emanating from the eyes of all the three deities got combined and resulted into the manifestation of goddess Parmeshwari.On the request of the deities,goddess Parmeshwari created three more goddesses from her body-Brahmi,Vishnupriya and Rudrani.Goddess Brahmi was of fair complexion while Vishnupriya's complexion was wheatish.Goddess Rudrani appeared extremely ferocious in her dark complexion.

Varaha Purana also includes story of her killing Ruru, a demon king, who ruled over Ratnapuri which was situated in middle of ocean. 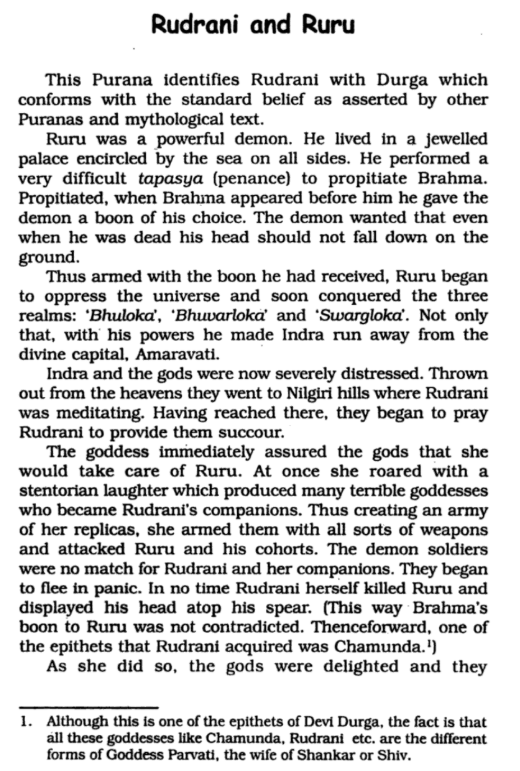 On hreem, I don't get the embodiment part. The word hreem is found in mantras. In Goddess Rudrani's case, the only association would be through Navarna Mantra but even here hreem is referring to Goddess Lakshmi's mantra.

Not the answer you're looking for? Browse other questions tagged shiva parvati .

5
How do Vaishnavites understand the Rudrahṛdayopaniṣad?
10
When did Parvati Devi marry Shiva?
9
Who are Adi Shakti and Durga?
5
Most of the Gods' stories end after the marriage stage. Are there any stories of Gods after their marriage?
12
Why and how did Lord Shiva fall in love with Mohini?
5
Where is it mentioned about sister of Lord Shiva in religious texts?
9
Which Scriptures say Shiva is easily pleased than rest of Gods?
5
About Goddess Ashvaroodha Devi
3
Does epic like Mahabharata mention about Lord Shiva's personal life events?