Can anybody please tell me the actual difference between these 2 shlokas. I know SriSuktam is a hymn for Goddess Laxmi but don't know about PurushSuktam.

Purusha Suktam is a sukta that occurs in Rg (10th Mandala, 90th Sukta), Yajus (31st chapter of Sri Shukla Yajur Veda, and 3.12 of the Taittiriya Aranyaka), Sama (Aranya Khanda, Dashati 7), and Atharva(19.6) Vedas. The version in the Sama Veda contains only 5 mantras and not the others you can find in the Rg and Yajur vedas.

You can see it like the book of genesis in a way, though not exactly the same. It glorifies the Virat Purusha outlining HIS form, the mystical attributes, and then goes on to say how the world / people of different varnas originated from HIM. Most interpretations take that entire suktam as a hymn on Lord Sriman Narayana / VishNu.

That's because one of the mantras says

Sri Suktam can be found both in Rg and Yajur Veda, though the swaras differ mildly. As you mentioned, IT is a suktam on Mother Sri - meaning Maha Lakshmi, the Goddess of wealth.

"As for Purusha Suktam it's definitely a hymn to Lord Rudra"

Purusha Sukta appeared first in Rig Veda 10.90. Narayana Maharshi was the 'Mantra Drashta'(seer) of the hymn. This Narayana Maharshi was later incarnated as Devaki putra Sri Krishna during Dwaparayuga. His counterpart Nara Maharshi was born as 'Arjuna'. By the grace of Lord Shiva, Narayana Mahrshi got the divine vision of Purusha. He was the first Human Rishi to realise the universal oneness and oneness of Atman in all beings. This non-dual knowledge made Narayana Rishi merge with Lord Shiva. Those who know Purusha will become, verily, like Purusha, the self of all beings.

Sathapatha Brahmana of Shukla yajurveda describes how Narayana Rishi became one with Purusha.

"puruṣo ha nārāyaṇo'kāmayata atitiṣṭheyaṃ sarvāṇi bhūtānyahamevedaṃ sarvaṃ syāmiti sa etam puruṣamedham pañcarātram yajñakratumapaśyattamāharattenāyajata teneṣṭvātyatiṣṭhatsarvāṇi bhūtānīdaṃ sarvamabhavadatitiṣṭhati sarvāṇi bhūtānīdaṃ sarvam bhavati ya evam vidvānpuruṣamedhena yajate yo vaitadevam veda" ( Sathapatha Brahmana 13:6:1:1) "Purusha Narayana desired, 'Would that I overpassed all beings ! would that I alone were everything- here (this universe) !' He beheld this 'five days' sacrificial performance, the Purushamedha and took it and performed offering therewith ; and having performed offering therewith, he overpassed all beings, and became everything here. And, verily, he who, knowing this, performs the Purushamedha, or who even knows this, overpasses all beings, and becomes everything here."

"Rudra bhakthya thu krishnena jagat vyaptham mahathmana, Tham prasadhya thadha devam bhadaryam kila bharatha." "Arthath priya harathwam cha sarva lokeshu vai yadhaa, Prapthavaaneva rajendra suvarnaakshan maheswaraath." "The Krishna, due to his devotion to Supreme Lord Rudra, Has spread all over the universe, Oh Bharatha, Oh king of kings, After making Lord Shiva pleased by his penance in Bhadrinath, He has attained the state of being more dear, Than all the worlds and all aspects of knowledge."

According to purusha shuktam of yajurveda.:

"Hri and Lakshmi(Sri) are thy (Purusha Rudra's) wives: each side of thee are Day and Night."

According to Uma Samhita and Shiva Puran :

Chamundaye = The slayer of demons chand and mund

So here we can see all these names belongs to maa durga/kali she is also called as "sri" and maa parvati as "hri". ‘Hreem’ is Shakta Pranava and ‘Hree’ is an aspect of goddess Tripurasundari devi (Consort of Shiva). Lalita Sahasranama Stotram says, “Hreemkarini” is goddess Lalita Tripurasudnari. On similar lines ‘Mahalakshmi’ is another name of same Tripurasundari devi. Here this upanishad is totally dedicated to (and discusses about) the supreme being. who is Lord Rudra himself and no one else.

So from above we can conclude that purusha Rudra's two wives are maa Parvati/Sati and maa Kali/Durga. One is day (Maa Parvati as she is calm and giving in nature) and other is night (Maa Kali who is angrier and fierce in nature).

"let mothers such as Sarasvati, Dhriti, Medha, Hri, Sri, Lakshmi protect you and give you success."(Natsyashastra 3(86,87).)

As you can see here sometimes, sri is only refered to maa durga and not maa Lakshmi and hri always to maa parvati.

According to Atharva Veda.:

So Atharvana Veda clearly says that the chatur-varnas spring from Lord Mahadeva who is Veda Purusha. 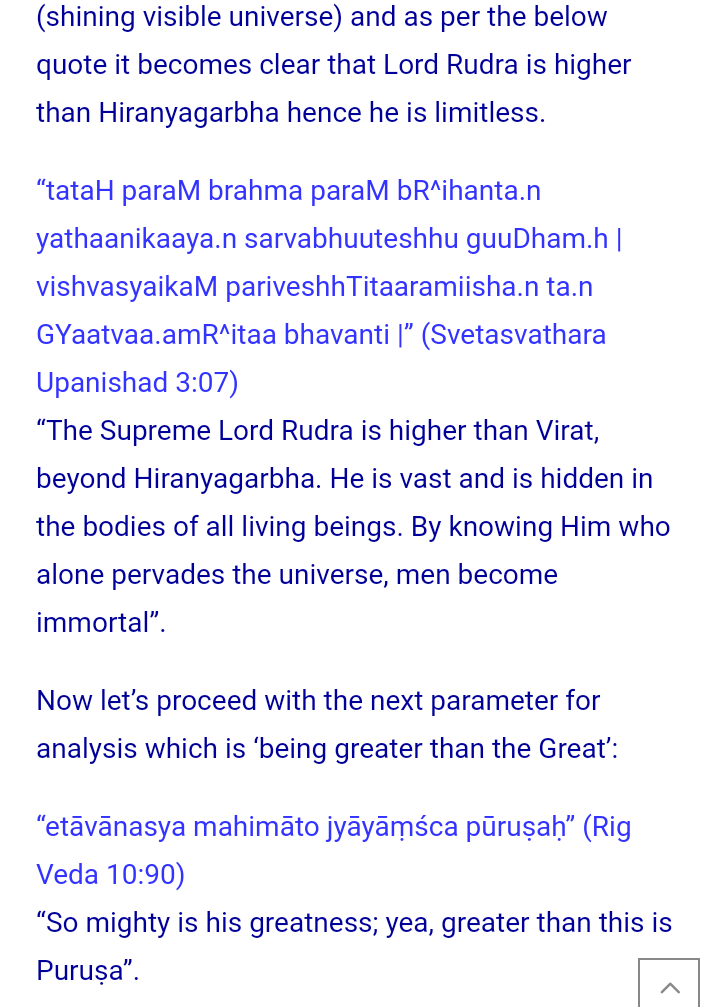 According to Manusmriti 1.19 Purusha is made of seven Mahapurushas. These are Indra, Shakti, Brahma, vishnu, shiva, shani and Yama.

We all know that shiva shakti are one only where as shani is Shiva's deciple and shiva is god of Yama in the form of mahakala. Indra also goes to lord shiva whenever he is in trouble.

As for Brahma and Vishnu, As said by lord Krishna himself in Mahabharatam to Lord Shiva.:

"ahaM brahmA kapilo yo.apyanantaH putrAH sarve brahmaNashchAtivIrAH | tvattaH sarve devadeva prasUtA evaM sarveshaH kAraNAtmA tvamIDyaH '||2-74-34 "O the lord of lord! Myself (Krishna/Vishnu), brahma, kapila, ananta (sheSha), all the valiant sons of brahma who conquered over the internal enemies - all are created from you (Shiva). Hence you are the lord of all. Hence you, the lord of all, are worthy of praise."

“iishaanaH sarvavidyaanaamiishvaraH sarvabhuutaanaaM | brahmaadhipatirbrahmaNo.adhipatirbrahmaa shivo me astu sadaashivom.h |” (Taittiriya Aranyaka 10.21.1)" “May the Supreme who is the ruler of all knowledge, controller of all created beings, the preserver of the Vedas and the one overlord of Hiranyagarbha, be benign to me. I am the Sadasiva described thus and denoted by Pranava”.

Well, let’s finally look at a verse from Upanishad which also speaks the same truth calling Mahadeva as the father of Vedas.

“prabhu.n vareNyaM pitaraM mahesha.n yo brahmaaNa.n vidadhaati tasmai | vedaa.nshcha sarvaanprahiNoti chaagrya.n ta.n vai prabhuM pitara.n devataanaam.h | mamaapi vishhNorjanaka.n devamiiDyaM yo.antakaale sarvalokaansa.njahaara |” (Sharabha Upanishad 2-3) “I am saluting that primeval God who is the Lord, who is the best, who is the father of the world, who is the greatest among gods, who has created Brahma, who gave all Vedas to Brahma in the beginning, who is the father of Vishnu and other devas, who merits praise, and who at the time of deluge destroys the world. He is the only one who is greater than every body, who is the best and who rules over others”.

Let’s just finish it with a bang.:

So Lord Rudra is the Veda Purusha.

The Śrī Sūkta forms part of the khilanis or appendices to the Ṛkveda. It is said that two devine couples churned the whole vedas and two suktam appeared. Let us see who the deity of sri suktam is. We all know that it is maa mahalakshmi now let's go deeper and see who this maa mahalakshmi actually is.

We will see this in two stages than we will conclude the answer below.: 1st stage.: Mulaprakriti Mahalakshmi is noneother than maa lalita tripura sundari. Let's see how.:

Okay without wasting time, let's see the Pradhānika Rahasya of Durgā Saptaśati, which describes Her.

“That Trigunātmikā Mahālakśmi is the Supreme Goddess and the source of all creation. Only She pervades and holds the creation in visible or invisible form.” ( Pradhānika Rahasya Verse 4).

“ Wielding in Her four arms, Mātulinga (citron), Gadā (Mace),Kheta(shield) and Pānpātram (drinking vessel) while having the emblems of snake, Lingam and Yoni on Her crown"

Further I want to ask something, is Bhagvatī Lakśmi offered wine and meat? Why not? It is clearly mentioned in Saptaśati

"Worship Her with bloodful sacrifice, meat and wine."(Vaikritika Rahasya Verse 28)

In purusha suktam part I have already given cites so don't wana repeat them due to low space. So all these names of every devi belongs to maa durga and kali only. Thus from above it is clear that the sri suktam is a hym to maa Tripura sundari whose husband is lord trayambakam maha Shiva and from them they create infinite tridevs and trideviyas in infinite number of universes.

Maa bhuvaneshwari sitting on the lap of lord bhuvaneshwar and the chair is made of lord shiva as a sitting plank and lord maha brahma, Mahavishnu, mahadeva, and Rudra as the 4 stands of the chair and mata laxmi and mata saraswati can be seen fanning maa Tripura sundari and along with the tridevs lord skanda and lord ganesha are also sitting down, which signifies that she as the mother of the universe and all gods and goddesses.

Now, for 2nd stage.: The diety of sri suktam is indeed none other than maa Lakshmi who is the consort of lord vishnu. Let's see does it contradicts our first analysis.

So mahabharata is says that all males are lord shiva and all females are maa uma. That also applies to all the gods and goddesses.

From the above verses we learn that Rudra(Shiva) is the Source of all, protector and destroyer. Means he alone does the “Srushti”, “Sthiti” and “Laya”. Note the highlight which says Shiva exists as Lord Vishnu. “Sipivista” is the epithet used extensively in Vedas for Vishnu.

Mahabharata (MBH 13:17:96) praises Rudra as “ūrdhvaretā jale śayaḥ |” which means, “Thou ownest for thy offspring, beings higher than men and deities (viz., Brahma and Vishnu). Thou art in the form of that Vishnu who floats on the waters after the universal dissolution”.

"dhAmno yasya hariragro.atha vishvo brahmA putraiH sahitashcha dvijAshcha | parAbhUtA bhavane yasya somo juShatveSha shreyase sAdhu goptA" ||2-72-58 "For our benefit, let lord shiva along with uma be pleased with us, whose splendour's main parts are lord viShNu and brahma, along with his sons, the sages such as sanaka, marIcha, whose abode they are unable to enter and who protects the good men."

As per as mahabharata.:

According to Rudra Hridaya Upanishad.:

“All the mobile and immobile creation of this universe, is filled up with Uma and Rudra. The Vyakta is Sri Uma, and the Avyakta is Lord Siva."

So the 2nd stage also doesn't contradicts the 1st. Conclusion.: From this it's been concluded that sri suktam is actually the hym of maa uma. 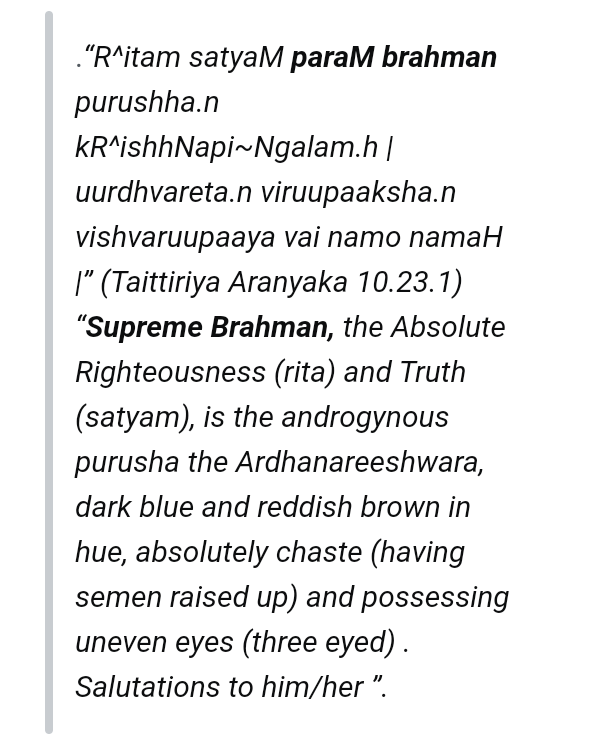 Not the answer you're looking for? Browse other questions tagged shloka .

4
What does gita anvay yog samanvay mean?
11
How many shlokas are there in Valmiki Ramayana?
5
Reference to Ganesha's statement from Mahabharata ("The day I was born I made my first mistake")
18
Where does Yajurveda have "karpūragauraṁ karuṇāvatāraṁ....bhavaṁ bhavānīsahitaṁ namāmi" verse?
7
What is the difference between a sloka and a mantra?
5
Kakah krishna pikah krishna.. Where this verse comes from?
2
How to gain mental strength?
6
Shlokas, Mantras, Stotra, for Protection of Family?
2
Are there any Mantras / Shlokas to bring about marriage with a suitable partner?