I started reading a book called “Some aspects of Ramayan and Mahabharata” by Bibek Debroy. (You can borrow it here https://archive.org/details/someaspectsofram0000debr/page/15/mode/1up)

First chapter of this book logically attempts to prove why Ravana couldn’t have been a rakshsha and possibility of him without ten heads and twenty hands.

Considering that readers would justify these consistencies with Ravana ability of taking any form he wants (because of his rakshsha powers), Bibek further points out even if Ravana used to switch between these 2 forms, it doesn’t make sense that he would do so rapidly on same occasion. Example -

As you see switch between 2 form just doesn’t add up. Similarly when Fighting with Jatayu, Jatayu cuts Ravana’s 20 hands and immediately in next verse Ravana hits him with 2 hands.

Finally Bibek goes on to justify that 10 headed form could actually be mask that Ravana used to wear. He further states that multi form aspects of Rakshahs and gods (4 headed brahma) and personalities (like Sahastrabahu Arjun) were introduced in post Christian Era and influenced from Greek mythological creatures.

Personally to me this goes against all the beliefs and conception that I have in our mythology and somewhere hurt the sentiments because then what is the truth?

Hindu scriptures talk of spiritual truths through stories. One should not take every detail of these stories literally. Do the spiritual truths of Ramayana depend on whether Ravana had 10 heads or one head? Multiheaded Ravana or Multi handed Gods are metaphorical and should not be taken literally.

Brahma tells Narada "This brief account of the manifestation of the Lord is what is called the Bhagavata. The Supreme Being Himself gave the knowledge of it to me. I have also given to you a brief account of the Lord's glories and attributes. You elucidate it with the help of your imaginative power in a way that will generate devotion in the mind of men for Sri Hari who is the soul and support of all."

The Supreme Lord is said to be fond of such figurative expositions of spiritual truth through stories. (For it is understandable even to common men while an abstract philosophical statement can be understood only by a very few.

In times past I learnt this wonderful allegory, which teaches the truth of the Atman indirectly in a story form.

I realized that my previous answer was incorrect as I had overlooked other verses. So I have deleted it. It does look that Ravana only had two hands but he was ten-faced.

The valorous Decahedron Ravana then threw off Seetha, and out of fury he scuffled with the king of eagles with fisticuffs and kicks, by both his feet and fists. [3-51-40]

Here it is absolutely clear that Ravana was using two hands and two feet. The words मुष्टिभ्याम् and चरणाभ्याम् as per Sanskrit declension refer to two fists/hands and two legs.

The above does not make sense if in Sarga 49 he had 20 arms.

That celebrated Ravana whose eyes are bloodshot as he is ensorcelled by desperate fury transmuted his form into a tend-faced, twenty-armed night-walker wearing golden ornaments of purified gold and appearing as a black tempestuous cloud. [3-49-7, 8a]

दशास्यः means "ten faced one", so not necessarily transformed into a being having 10 heads at that time. But we cannot rule out him not having ten heads.

Also विंशतिभुजः is replaced with कार्मुकी बाणी ~ holding a bow and arrow. So no mention of twenty arms.

The commentator is saying Ravana transformed into a form that had red eyes, and such features of a demon 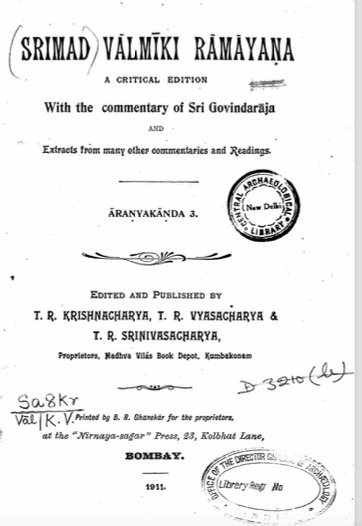 And those who want to refer to CE, here is a screen shot from ORI Baroda 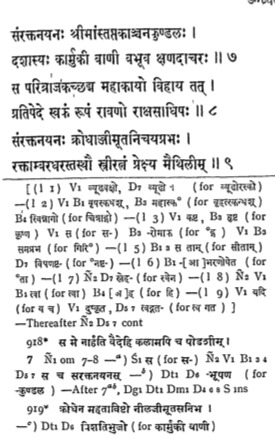 They have removed the middle line completely and also mention that विंशतिभुजः is present in only two manuscripts.

I could not find mention of multi-headed and multi-handed Gods in the Rig Veda. Bṛhaddevatā also did not mention about such issues.

The 1000 heads of Purusha or Brahman can be a metaphor only, as we cannot limit the viewing capacity of the Almighty to 1000 directions only.

There is no evidence to prove that the multi form Rakshahs and gods (4 headed brahma) and personalities (like Sahastrabahu Arjun) were introduced in post Christian Era influenced from Greek mythological creatures.

This can be conjecture of the author.

Those depictions might have been influenced by 5 faces of Sadasiva also.

Both Rig to Yajur Vedās, Rudra's form is Viṣvarūpam, meaning the cosmic form or the all-encompassing omni-form, and Pururūpam, meaning multiform/multihued, and Virūpam, meaning multifold altering forms RV2.33.10,TS4.5.4,TA10.23.1. It was Mahābhāratam Itihasa 203 which actually gave a definition to the term Viṣvarūpam by saying “since those Devas called the Viṣvadevas are in Him, He is for that reason called Viṣvarūpam”.

Both Śrī Rudram and Śatarudrīya describe a furious form emerging out of Prajāpati. This anger is called Manyu, the ferocious aspect of Rudra with a hundred heads, a thousand eyes, and thousands of weapons. This matches perfectly with Kausitaki Brāhmaṇa 6 of Rig Veda wherein it describes Rudra as a thousand-eyed and arms with thousand weapons.

This all-encompassing form of Rudra was very difficult to iconify into sculpture or painting, so two approaches are possible, first option was to show one body with many heads and hands, like the magnificent sculpture at Thanumalayan Temple in Suchindram, Tamil Nadu. The latter option was to depict one being with various forms emerging out of it, like the Mahadeva Vishvaroopma icon found in Parel, Mumbai by the Indian Archeological Society, currently stored in Chhatrapati Shivaji Maharaj Vastu Sangrahalaya Museum.

After Nārāyaṇa Sukta and Śrīmad Bhagavādgita, Viṣṇu’s Viṣvarūpam took high prominence in its depiction. Alongside Rudra, Soma and Prajāpati shared the title of Viṣvarūpam, but Varuna is also addressed in a similar way RV7.34. For more details, you can search in Google for "Sanatanadhara Rudra Shiva across Vedas" 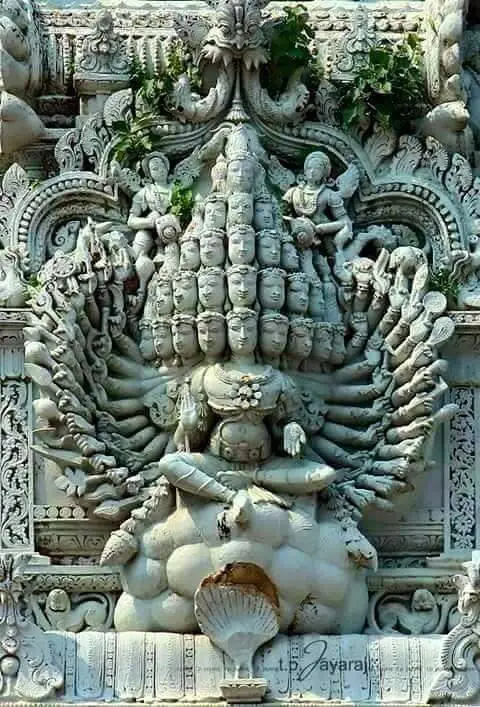 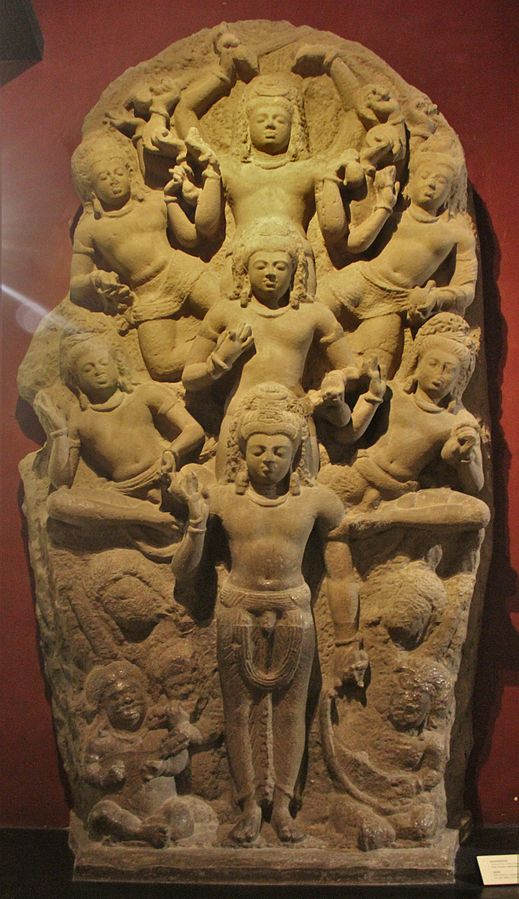 Not the answer you're looking for? Browse other questions tagged vedas ramayana .

6
Which are the Five faces of Lord Shiva?
3
Is Ravana ever depicted as fighting with more than two hands?

1
Transitory nature of Vedas, Puranas, GODs
12
Was Arjuna left-handed?
11
Who divided Vedas?
12
Which all Gods and Goddesses are being referred in Vedas?
4
Rama and Sita in the Vedas
5
How Hanumanji being a monkey learned the Vedas?
5
Who is the three headed son of Ravana
1
Do Vedas praise today minor gods as Brahman anywhere?
0
Do the Vedas and the Upanishads support atheism(lack of belief in the existence of God or gods)?