Who was Parashara and what are the works attributed to him?

I am asking about the original Parashara - not the Srivaishnavite teacher Parasara Bhattar.

Which works are attributed to him?

Veda Vyasa, the compiler of the Vedas, the author of the various Puranas and Mahabharata, is a son of Parashara Rishi and Satyavati.

Even before the birth of Parāśara, Kalmāṣapāda in his demoniacal form ate his father, Śakti. Therefore Parāśara nurtured an obstinate hatred against the Rākṣasas. So he performed a Yāga to kill all the rākṣasas. Thousands of rākṣasas were burnt to death at this yāga and Vasiṣṭha, grandfather of Parāśara felt sorry for the innocent rākṣasas. He approached Parāśara and said "Son, do not give way to such anger. Abandon this wrath. What harm have these poor rākṣasas done? Death was in the destiny of your father. Every one has to suffer the result of his own deeds. Anger destroys the fame and austerity which one has attained by years of toil. Therefore abandon your anger and wind up your Yāga."

Parāśara accepted the abvice of his grandfather. Vasiṣṭha was pleased with his grandson and at that time Pulastyamaharṣi son of Brahmā also came there. Vasiṣṭha gave arghya (water and flowers) and received him. Then Vasiṣṭha and Pulastya jointly blessed him and said he would be the author of Purāṇasaṃhitā. Thus Parāśara became the best of the Guruparamparā (traditional line of preceptors). (Chapter 1, Aṃśa 1, Viṣṇu Purāṇa).

Parāśara begot a son of a fisherwoman named Satyavatī and the boy became later the celebrated Vyāsa.

He was the composer of the Vishnu Purana, the Parshara Smriti and also the astrological treatise called "Brihat Parashara Hora Shastra".

The Bṛhat Parāśara Horāśāstra is the most comprehensive extant work on natal astrology in Hindu astrology ascribed to any Rishi or sage according to the text itself. Its oldest printed version is a composite work of 71 chapters, in which the first part (chapters 1-51) dates to the 7th and early 8th centuries, and the second part (chapters 52-71) dates to the latter part of the 8th century.

The text says that this work was created by Sage Parāśara, father of Vedavyāsa who was the compiler of the Epic Mahabharata for the benefit of Kaliyuga.

The Visnu Purana as herein recorded was spoken by Parasara Muni to the sage Maitreya. Parasara Muni is the father of Krsna Dvaipayana Vyasa, the compiler of the Vedas and author of Mahabharata. In Mahabharata, the story of Vyasa’s birth is told. Once, Parasara Muni desired to cross the river and the boatman had engaged his beautiful daughter, Satyavati, to ply the boat that day. Parasara became enamored with Satyavati’s beauty1 and while halfway across the wide river, he expressed his desire for intimate relations with her.

And, regarding the Parashara Smriti, the first chapter of the text makes it clear that the law-giver (or the author of the scripture) here is Parashara Rishi.

When several Rishis asked Vyasa to expound the laws, he says it was not possible for him to do that. Instead he recommended asking his father (i.e. Parashara). This is how the text begins.

Now to begin. — On the top of the snowy hill, in the hermitage of the Devadaru grove, the Rishis of yore interrogated Vyasa, who was seated, rapt in thought.

Some other details about Rishi Parashara are given below (quoting from the first link in my answer). He is also a Vedic Rishi to whom some Vedic mantras were revealed.

Rishi Parashara is the Rishi of Suktas 65-73 of Rig Veda Mandala 1. Given below is a screenshot (from the book "Essentials of Rig Veda; R.L.Kashyap; Sakshi Publications) confirming the same. 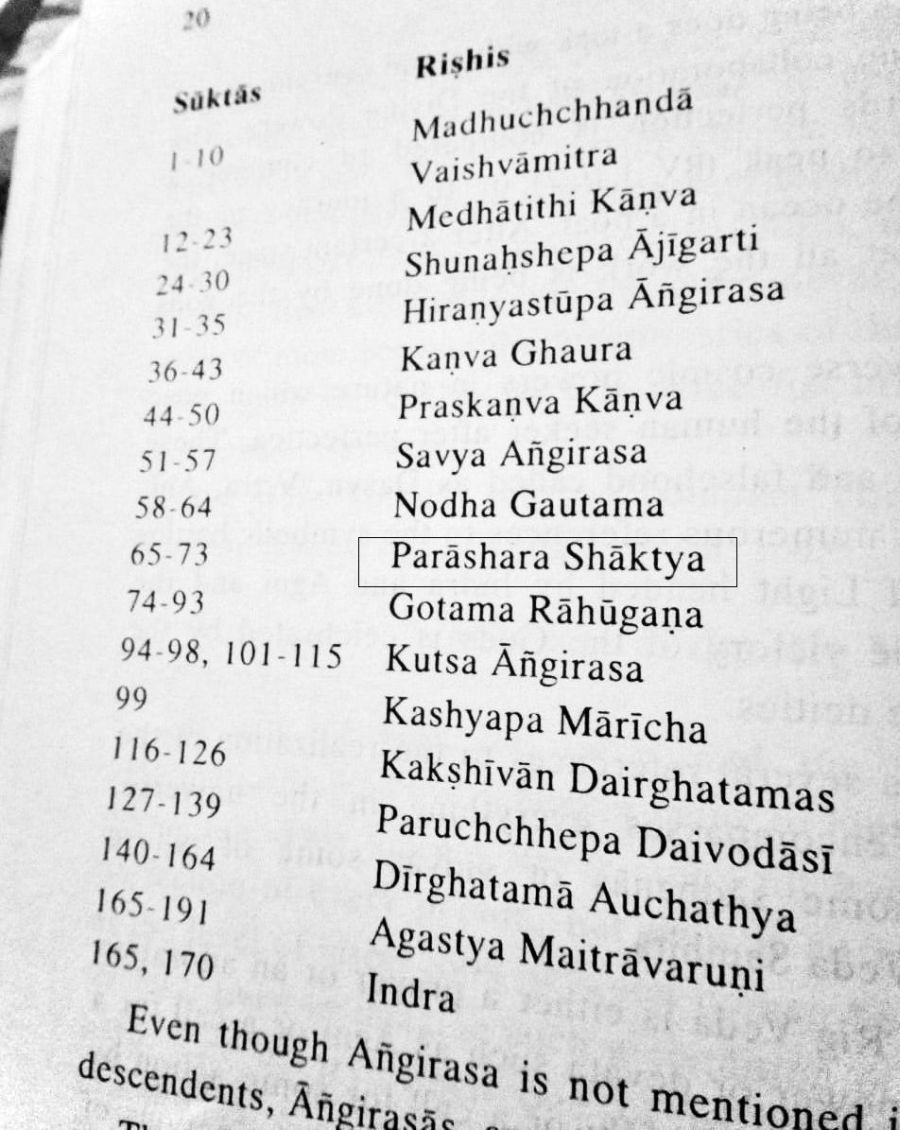 Parashara Shaktya referring to Parashara as the son of Shakti.

Not the answer you're looking for? Browse other questions tagged scripture rishi parashara .

7
Was Rishi Vyasa the great grandson of Rishi Vashishtha?
11
Who was sage Harita, the son of Bhṛgu?
10
What scriptures describe Parashara asking for Moksha for everyone?
5
What is the story of Rishi Shakti?
3
What are the important texts of Gaudiya Vaishnavism?
5
Which all works are attributed to sage Shaunaka?
6
Is there any original detailed treatise on the rituals (Kalpa Vedanga) of the Vedas other than the Kalpa Sutras and who is the propagating Rishi?