What are the three worlds in the Rig Veda

I was reading a book called 'Astronomical Myths:Myths of the Heavens' by John F. Blake and I came across this at Page 11-13:

"Thus to the earth they gave the name P'RTHOVI, "the wide expanse;" the blue and star-bespangled heavens they called VARUNA, "the vault;" and beneath it in the region of the clouds they enthroned the light DYAUS, i.e. "the luminous air."

followed by this image 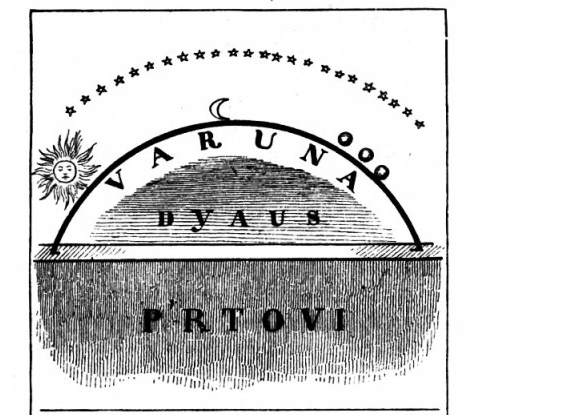 Upon researching further, I only found that the heavens are called 'Dyaus' and the mid-region is called 'Antariksh'. So how accurate is this image and what do we know about the three worlds in Vedic era?

5
Why Mitra and Varuna devas are also called Rudras In Rig veda book 5 hymn 70?
5
Who are the dark-coloured inhabitants in this Rig Veda verse?
3
What are the 360 forms/names of the Youth mentioned in Rig Veda I.155.6?
1
Rig veda and creation
1
Which Rig-Vedic Gods have spouses who are also mentioned in the Rig Veda Samhita?
4
Where in the Rig Veda are the 10 Upanishads?