Among Vedanta philosophies, Advait of Shankaracharya, Vishishtadvait of Ramanujacharya and Dvait of Madhvacharya are most famous and widely followed.

Dvaitins believe Madhwa to be the avatar (incarnation) of Vayu, the wind God. They often quote Balitha Suktam from Rigved.

This answer here quotes the very same verse stating that Sayanacharya attributes the verse to Agni.

So to sum up my question

Here is balitha suktam in sanskrit:

Edit1: This might help the users look up Sukt in Rigved :

The OP stated in one his comments as follows;

1) Interpretation of this suktam by anyone prior to Madhwa

Much before Sri Madvacharya came into existence, Bṛhaddevatā by Shaunaka was in existence.

Bṛhaddevatā is an enlarged catalogue of the Rigvedic deities worshipped in the individual suktas (hymns) of the Rigveda. It also contains the myths and legends related to the composition of these suktas.

It consists eight adhyayas (chapters), mostly written in Anuṣṭubh meter, though a number of verses are in Triṣṭubh meter also. Each adhyaya comprises about 30 vargas, each consisting of five verses. The text begins with a long introduction embracing the complete first adhyaya, and twenty-five vargas of the second. The main body of the text beginning from the twenty-sixth varga of the second adhyaya, for the most part, is concerned with stating the deities, in their successive order, for the hymns and stanzas of the Rigveda. It also comprises nearly forty legends, described to explain the circumstances under which the hymns they are concerned with were composed.

In Bṛhaddevatā, Shaunaka briefly narrates about Hymns 140 to 144 of Mandala I. It was the Hymn I.141, which was quoted by Sri Madvacharya to prove that he was the incarnation of Vayu.

Shaunaka says about I.141 that it was dedicated to Agni, but not to Vayu. Extract of that page from Bṛhaddevatā was posted below. 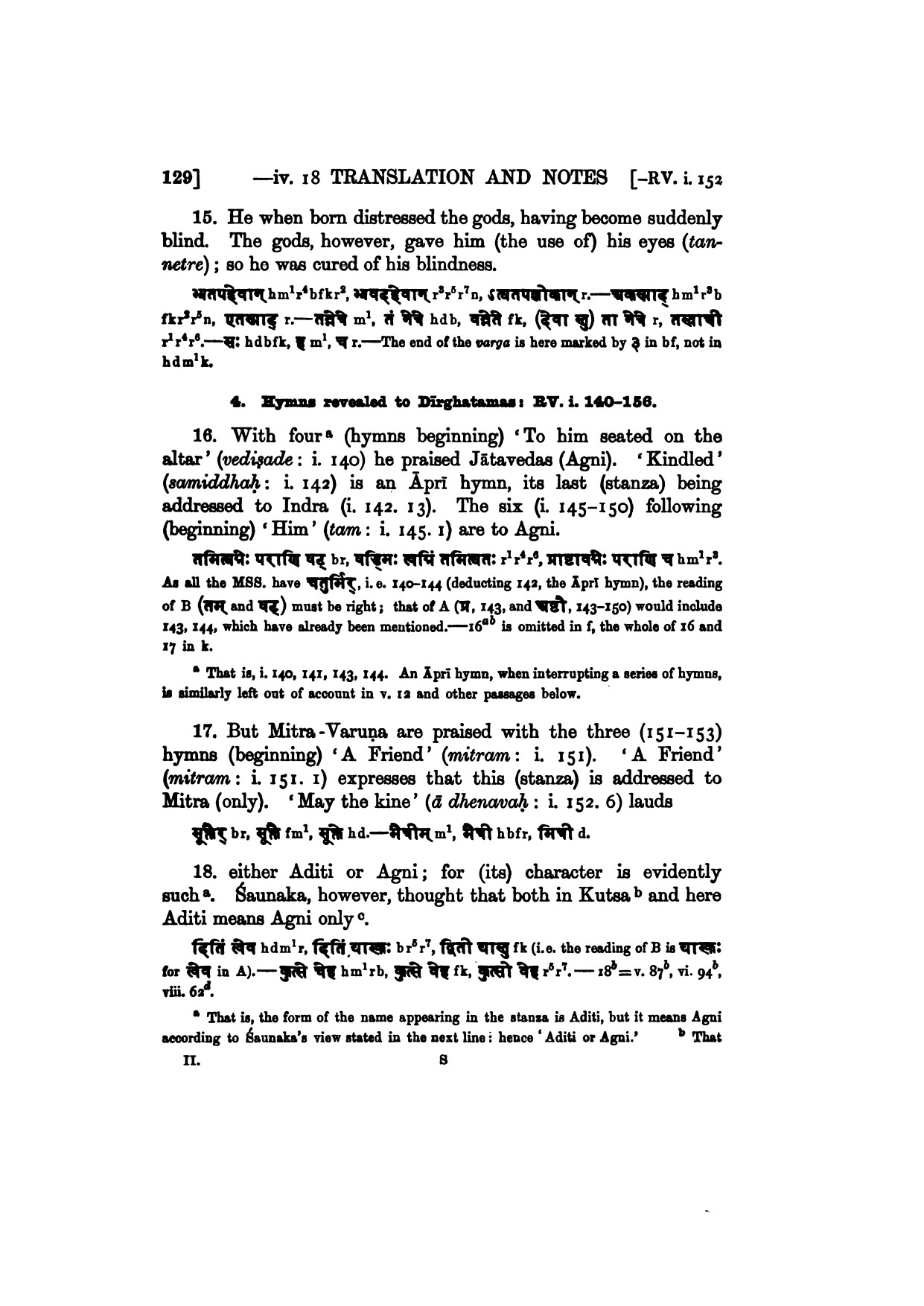 Yes. It exists in Rig Veda at I.141. These 2 sites are showing this sukta here and here.

madhvaḥ is the genitive case of madhu - Honey, (meaning “of madhu”) and has nothing to do with madhwacharya.

It was translated by Jamison Brereton as -

"This is really true, Indra and Varuṇa: the seven “voices” of Krśa milk out a wave of honey for you two."

Since I don't have enough reputation to put this as comment I am putting it here.

The answer by Srimannarayana K V gives the required information but I don't agree on one point. I think it is not true that Madhwacharya uses this hymn to prove that he is Vayu avatar. It is his devotees that use the hymn to prove the point. In fact Madhwacharya does not even try to prove it in any way but rather he just declares himself so in the end of some bhashyas/commentaries.

I also feel it is shameful to seek validation from a foreign author on this matter.

I suggest one should first refer and understand the Madhwa interpretation of the hymn. I got one succinct one in a blog. See the excerpt below for reference.

When one comapres the baLitha sUkta & Madhwacharya’s biography would notice that Madhwacharya’s Ashrama nAma was pUrnaprajna & later he was named AnandatIrtha. But these names don’t find mention in baLitha sUkta. It mentions the words – Dashapramati & Madhwa. Hence some people accuse that he named himself as Madhwa to claim that he is avatar of vAyu. The explanation for this is as follows:

The language used in Vedas are cryptic. For ex, Purusha sUkta says “pAdOsya vishwA bhUtAni” which literally means God created universe with 25% of himself. In actual it means, God created universe with a negligible part of himself. Another ex, Taittariya Upanishad says that paramAtmA’s Ananda is 100 times greater than that of brahma devaru. Whereas it doesn’t mean exactly 100 times but means many folds higher. This is justified in the continuation part of the same context where it is said that paramAtmA’s Ananda can’t be defined in numbers, it is infinite. In this context, Dasha = pUrna Pramati = prajna (known) Hence, dashapramati means pUrnaprajna. Coming to AnandatIrtha, Madhu = sweet = AnandadAyaka Va = sacred water/ tirtha [Vam is the beejamantra for jala (water)] Hence, Madhu + va = Ananda + tirtha. Madhwa = AnandatIrtha

9
Do scriptures mention about Srimad Madhvacharya being an avatar of Lord Vayu?
4
Manyu Suktam and Lord Narasimha
2
Churning of Ocean and Lord Shiva consuming poison as per Mahabharata Tarparya Nirnaya

8
Why does the Rig Veda call Vishnu a mountain-roaming bull?
9
Do scriptures mention about Srimad Madhvacharya being an avatar of Lord Vayu?
4
Does Rig Veda declare Gods to be immortal?
3
How does Madhvacharya interpret Bhagavad Gita sloka 18.66?
4
Does Rig Veda 10.59.7 talk about rebirth?
5
Why did Purusha Sukta from Rig Veda contain mention about Yajur and Sama Vedas?
4
Does the word Yoga appear in Rig Veda?
1
Rig veda and creation