Why is Goddess Kali's depiction so scary? Do we get less scared of her image as we shed our ego?

I was wondering why Goddess Kali's image is so scary. She is said to be a mother that is compassionate and loving to her children.

Have you ever gone through the Durga Saptasathi - 700 slokas of Devi Maahatmya, in which the emergence of Kali, from Devi was described?

After eliminating the chief warriors in the army of Chanda and Munda, Devi Chandika was confronted with Chanda and Munda, along with remaining army. They made an effort to capture her, and others approached her, with their bows bent and swords drawn.

Thereupon Ambika became terribly angry with those foes, and in her anger her countenance then became dark as ink. Out from the surface of her forehead, fierce with frown, suddenly issued Kali of terrible countenance, armed with a sword and noose.

Bearing the strange skull-topped staff, decorated with a garland of skulls, clad in a tiger’s skin, very appalling owing to her emaciated flesh, with gaping mouth, fearful with her tongue lolling out, having deep-sunk reddish eyes and filling the regions of the sky with her roars, and falling upon impetuously and slaughtering the great asuras in that army, she devoured those hosts of the foes of the devas. 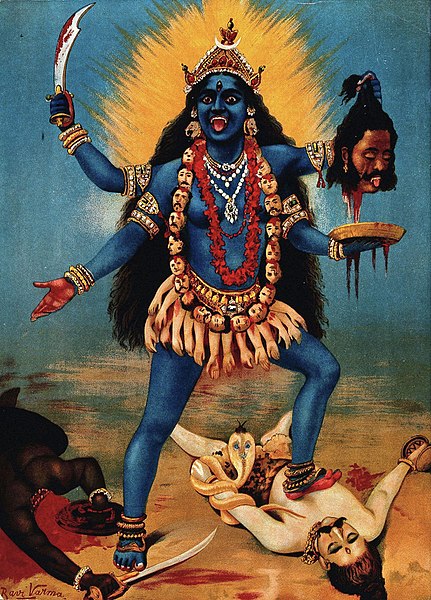 And, in the end, it was Kali,who eliminates Chanda and Munda and brings their heads to Devi Chandika.

So Kali is the fearful form of Devi Chandika, emerged with a special purpose.

It is not the question shedding EGO, but the question of one's taste. If ONE is afraid of THAT fearful form, ONE should perform puja to smiling form of Devi - Rajarajeswari. 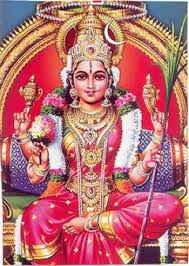 One is afraid of something one does not understand. There is nothing scary about Kali's iconography if one understands the philosophical meaning.

Not the answer you're looking for? Browse other questions tagged goddess symbolism kali shaktism .

6
Who was Ahimsâ dévî?
3
What is the meaning of Karni Mata's description as a woman with a head in her hand?
4
Need help identifying Hindu Goddess