Who is the devi Nikumbila worshipped by Indrajit through tantric rites. Is she Maa Pratyangira or a local Lankan deity?

In this video, Sri Siddesvarananda Bharati Swamy of Sri Siddeswari Pitham at Courtallam explained that the other name of Pratyangira is Nikhumbhila, who was worshipped by Indrajit. 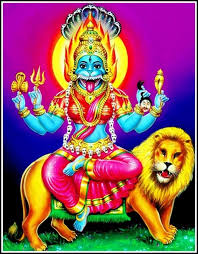 The video is in Telugu.

He explains that sage AngIrasa first got the vision Devi in the form of Pratyangira and had composed mantras, which are embedded in Atharva Veda.

He had further explained that Pratyangira got the name of Nikhumbhila, because once Pratyangira was worshipped by a demon by name Nikhumbha, using the mantras composed by Sage angIrasa and got the darshan of the former.

Not the answer you're looking for? Browse other questions tagged ramayana devi indrajit .

12
Was Tantric upasana (Vamachara) a relatively new concept (or) in existence in ancient India also?
7
Who are these goddesses?
6
What is the actual name of these mysterious goddesses?
7
Who is Ratri devi? Is she same or different from Devi Kaali?
1
Did Lord Rama worship Devi Ambika?