Did Rantideva kill cows and cook in his kitchen to feed the hungry?

I was listening to Mahabharata audio podcasts. My doubt was when Rishi Kaushika met the butcher in Mithila nagara, did the butcher mention that king Rantideva also killed many animals including cows and later cooked them in his kitchen to feed the hungry and the needy?

Drona Parva says that he donates food cooked by 2000 cooks.

Narada said, 'Rantideva, the son of Srinjaya, we hear, fell a prey to death. That high-souled king had two hundred thousand cooks to distribute excellent food, raw and cooked, like unto Amrita, unto the Brahmanas, by day and by night, who might come to his house as guests. 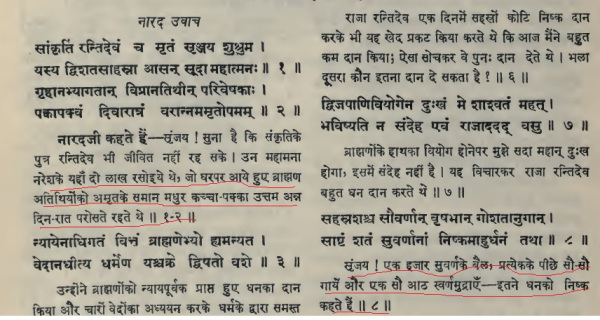 Now time to analyse the passage of Vanaparva.

And, O Brahmana, king Sivi, the son of Usinara, of great forbearance attained to heaven, which is hard to reach, giving away his own flesh. And in days of yore, O Brahmana, two thousand animals used to be killed every day in the kitchen of king Rantideva; and in the same manner two thousand cows were killed every day; and, O best of regenerate beings, king Rantideva acquired unrivalled reputation by distributing food with meat every day.

Here VadhYate is translated as killing. Which is against the sankrit Grammer. VadhYate here means tieing. Similarly Mansam is a sankrit word which means both rice meal and meat.

Here, it is clearly written that rice means Mamasa translated as flesh. It means that he donates food not cow meat. If you translate these words as killing and meat that it will contradict the shloka given in Anushasan Parva.

He, who, without being checked by the restraints of the scriptures, sells a cow, or kills one, or eats the flesh of a cow, or they, who, for the sake of wealth, suffer a person to kill kine,--all these, viz., he that kills, he that eats, and he that permits the slaughter,--rot in hell for as many years as there are hairs on the body of the cow so slain. 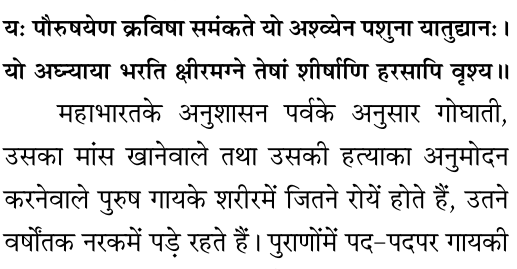 You could read this blog for more shlokas prohibits cow slaughter.

Not the answer you're looking for? Browse other questions tagged mahabharata animals non-vegetarian cows .

8
Is any other religion or civilization mentioned in Mahabharata, Ramayana or other Hindu holy books?
5
Which king Janamejaya killed a Brahmin woman?
14
When did Vibhishana stop being king of Lanka?
9
When did Cows receive the boon of horns from Brahma & why did they want them?
7
Clarification about Saptarshis of Vaivasvat Manvantar
6
Do any scriptures describe fish to be vegetarian/Sattvic?
7
Was Laxman Kumara named after Lakshmana?
7
Was the Atharva Veda compiled at the time of King Parikshit?