contradiction between Nasadiya Sukta and Hiranyagarbha

I was going through the mentioned phrases of Rig Veda and got little confused in different points on creation. In Nasadiya it is mentioned that even creator might don't know about creation. on the other side Rigveda (10.121) mentions the Hiranyagarbha ("golden embryo") as the source of the creation of the Universe.

Help me in understanding.

I agree that most of translation of Nasadiya Sukta concludes that " he knows - or maybe even he does not know."

Rigveda 10.129.7 Whence all creation had its origin, he, whether he fashioned it or whether he did not, he, who surveys it all from highest heaven, he knows - or maybe even he does not know.

However another interpretation I found for this line is No other than him does know it completely (only he knows).

According to Sayana Bhashya

So, it can be concluded that the interpretation is only he does know, no other.

According to Dayananda Saraswati

To support or verify this interpretation, I am quoting the commentary of Swami Dayananda Saraswati of Aryasamaja whose interpretations of Vedas are also considerably followed

Here underlined text is in Hindi which translates in English as follows:

You may also read English version from Book by Dr. Tulsi Ram.

You may refer this page from Internet Archive: 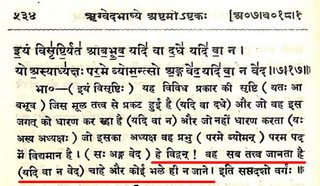 O scholar! That Tattva (who creates) knows these all even whether others don't know

In Nasadiya it is mentioned that even creator might don't know about creation. on the other side Rigveda (10.121) mentions the Hiranyagarbha ("golden embryo") as the source of the creation of the Universe.

I had already expressed my opinion on The Nāsadīya Sūkta. RV X.121.1 says,

The golden embryo evolved in the beginning. Born the lord of what came to be, he alone existed. He supports the earth and the heaven here— – Who is the god to whom we should do homage with our oblation?

Brereton and Jamison in their translation to RV X.121, say as follows:

This hymn takes the form of a cosmogony, but here the creative principle is unnamed or has no name. Rather than declaring its deity, the hymn’s refrain is a question: “Who is the god to whom we should do homage with our oblation?”

This questioning about creator - “Who is the god to whom we should do homage with our oblation?” continues even in the subsequent 8 mantras.

However, it was only in 10th Mantra of RV X.121 that the creator was named as prajApati.

O Prajāpati! No one other than you has encompassed all these things that have been born. Let what we desire as we make oblation to you be ours. We would be lords of riches

As pointed out by Brereton and Jamison, the last mantra might be a later day addition, as it deviated from the preceding 9 mantras, which said “Who is the god to whom we should do homage with our oblation?”.

In 8th mantra it was said the god over gods, alone existed (deveṣvadhi deva eka āsīt).

Further, hiranyagirbha (golden embryo) is an epithet referring to source of creation.

In X.96.5 it was stated that SOMA, again an epithet for BLISS, is the creator of all Gods, including Indra, Vishnu, etc.

Hence, we should not get confused with the epithets to be as real things.

In a way, it is an inconsequential question. It's important to understand that we are not answering something in black and white. For example, it's more concrete to answer a question whether gravity exists and if so how to measure it. It's not because the question was easy. The question may have been difficult but at least it is observable and measurable phenomenon. The Nasadiya Sukta is not seeking to answer a black & white kind of question. It's beautifully postulating what was there before creation. In fact, it says there was neither existence nor non-existence. I can at least partly visualise that there may have been a state before existence but how does one conceive a state when even non-existence wasn't there. So, you cannot pick up a literal meaning and debate it. Human mind forms experiences and patterns based on our past experience. We always understand something new by framing it in known terms and patterns. These are going into extremely finer points beyond the ability of our grasp because our mind based on its own experience has its limitations. It's not like our sages sat down, contemplated and theorised it. All of vedas was Shruti meaning they were heard in deep states of Dhyana and Samyama. It can be questioned and answered verbally. Just like Swami Vivekananda had an inner experience when Ramakrishna Paramahamsa touched him, one may experience answers to such questions but expressing and verbalising the answers especially as to how creation happened doesn't make much sense. Nasadiya Sukta is an amazing and startling piece of literature that it was able to express something as abstract as this in poetic terms.

10
Unedited works of Sayana on Veda
3
Where is Hiranyagarbha?
6
Translation of Rig Veda by an Indian author
1
Why Nasadiya Sukta says even god himself might not know about creation?

3
What does the recitation at the beginning of this sukta say? (RV I.32)
7
How does Dayananda Saraswati explain the Purusha Sukta of the Rigveda?
4
Is there any connection between Vishnu and Rudra in Rigveda?
5
Why did Purusha Sukta from Rig Veda contain mention about Yajur and Sama Vedas?
3
Is there any sukta in Rigveda containing 16 richas and starting with the word"Indra"?
1
Why Nasadiya Sukta says even god himself might not know about creation?
1
Is there any difference between rig veda and rig ved samhita
2
Is the concept of one Ishwara present in Vedas? Authenticity and Ancientness of Purusha Sukta