Were the Shiva and Lingam independent concepts prior to the emergence of Puranas?

I read somewhere that concept of lingam is absent in vedas and onle emerged with the advent of Puranas. Is there truth in it?

vedas shiva-purana shiva-lingam
Share
Improve this question
asked May 30 '20 at 7:35

Saivism as a religion has persisted since the pre-historic times , according to the archeological findings in Harappa and Mohenjodaro, having a continuous history of more than 5000 years.

There was a dominant element of religion in the Indus Valley, well represented by the phallic Lingam which is what has been found at Harappa : a conical terracotta object with a large thick ring , probably a Yoni, or the female principle.

But there is more, here is an analysis from a group of study Dravidian Literature .

Worship of phallus is indeed present somehow in the Rigveda , but the meaning is not clear :

From H.H. Wilson (unfortunately i have only this available) we get the following:

Let not the Raaksasas, Indra, do us harm; let not the evil spirits do harm to our progeny, most powerful (Indra): let the sovereign lord, (Indra), exert himself (in the restraint) of disorderly beings, so that the unchaste may not disturb our rite.

The notes added are:

The unchaste -- sisnadevah , abrahmacharya ityarthah , following Yaska IV. 19, but it may have the sense of those who hold the Linga for a deity.

So it becomes clear that the meaning is taken as unchaste gods;, ;Not Brahmanical ;lustful deities ; and that it was Wilson who SPECULATED that as such it could be a reference to Linga worshippers put by Svami Prakash as Phallus worshippers etc. But when we think all about these, the meaning for sisna deva is NOT Linga worshipers but only something non-Brahmanical or non-brahmacariam favoring deities and hence could be Tantric deities that promoted sexual life and in that did not favor the Way of Bramahcarya, identified here the Way of the Vedic or Brahmanical Dharma. The negative emotions towards sisna deva could also be because of this. 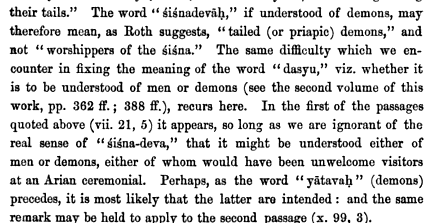 These deities might have been deities worshipped by the ancient Tantrics in India and a form of worship disliked by the Brahmanahs given over as they were to the practice of Bramahcarya. So i think it remains in the reign of linguistic speculations and not of empirical proofs about it.

If you consider that even in recent great historical texts like the one of Ronald Davidson on the Indian Esoteric Buddhism , the mixture of socio-political relations in the 6-9th century of India connected to the religious and esoteric panorama of various currents of hinduism , is extremely intricate it become very difficult to track down some consistent identity about the Lingam.

I think in either cases the most plausible hypothesis is a slow and constant aggregation of faith on purely material concepts related to everyday life, like mandalas has been used as a form of medieval structures to detain power in the civil and religious courts.

The Shiva Lingam and Lord Shiva are not independent because the Lingam is like a god coming down to Earth as a figure. Lingams are usually used as an idol to worship Lord Shiva and do abhishekam to him. In Vedic Literatures, it does not crearly state the existance of a Lingam, but in otherforms like pillars (Stambha) and others. In the Puranas, there is a Purana just dedicated to this topic, called the Shiva Purana. The Purana explains the concept of how the lingam came to be today. So no, there was no word "Lingam" before the Puranas, but hints of something similar to it. If you need more information, click this.

Not the answer you're looking for? Browse other questions tagged vedas shiva-purana shiva-lingam .

41
What are some online sources to get unabridged Hindu Scriptures or to learn Hinduism?
6
Is Shiva lingam mentioned in Vedas?
4
Are Shiva , Vishnu and Brahma non vedic Gods?

10
What is the copper pot that is kept hanging above the Shiva Lingam?
11
Where is it mentioned that Krishna and Rama Worshipped Shiva Lingam?
13
Can devotees drink "Abhishekam water" of Shiva Lingam?
10
Do Vedas or Shruti describe Lord Shiva as Sattva (सत्व)?
8
Are Itihasa and puranas superior than Vedas?