Dvaita vs Advaita vs Vishistadvaita vs Shuddhadvaita vs any other

I hear these terms Dvaita, Advaita, Vishistadvaita, Shuddhadvaita, and may be any other XYZdvaita, etc in most of the questions but I am not very sure what do they refer to. Are these some communities driven by a particular group of people just like we have Valmiki-samaj, etc or they are just thinkings/philosophies. What is the difference between them and whether people following them do/perform anything in different manners. Do we also have some texts from Vedas or Puranas which divide them. If there is then please provide examples.

Q. I hear these terms Dvaita, Advaita, Vishistdvaita, Shuddhadvaita, and may be any other XYZdvaita, etc in most of the questions but I am not very sure what do they refer to.

There are six Darshan (षडदर्शन) i.e philosophy in Hinduism which are Samkhya, Yoga, Nyaya, Vaisheshika, Mimamsa and Vedanta.

Among these six schools, Vedanta(वेदांत) is very popular and has it's root in Veda/Upanishad (Shruti). Following (the terms you've mentioned) are the sub-schools of Vedanta: 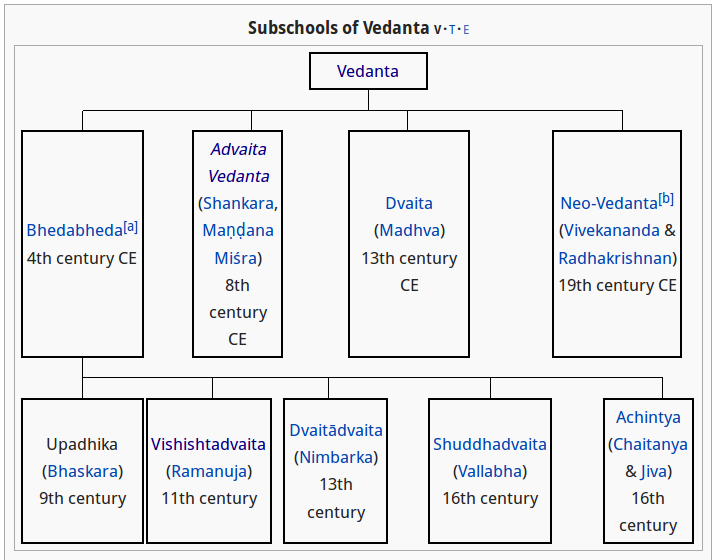 Q. Are these some communities driven by a particular group of people just like we have Valmiki-samaj, etc or they are just thinkings/philosophies.

The founder or chief exponent of these schools (i.e philosophies) are as follows:

And followers of respected school or Aacharyas propagate their philosophies.

Q. What is the difference between them and whether people following them do/perform anything in different manners

Vedanta is a spiritual philosophy which think-over following three elements and relationship between them:

Actually the answer to the question Difference between them is Too Broad; Though visit Schools of Vedanta to get the overview of these different philosophies and respected article (on each school) to know the principle, thoughts and practices followed by respected schools.

Q. Do we also have some texts from Vedas or Puranas which divide them. If there is then please provide examples.

There is no particular text that divide them, in-fact these schools divide based on the interpretation of Vedantic-texts. Let me tell you there are three basic texts which are known as Prashthanatrayi of Vedanta which are:

The Acharyas mentioned above wrote Bhashya on these Prashtanatrayi to explain, establish and promote respected philosophy. Here Brahma Sutra is considered very important as it summarise and systematize the philosophical and spiritual ideas in the Upanishads.

Firstly, Lord Vedavyasa wrote Brahmasutra, brahma(supreme) sutra(tool/formula) for understanding of vedas, which needs to be used when deep diving into vedas.

For this "Brahmasutra" there are 22 commentaries. 20 commentary was from Shankaracharya(interpreted as Mayavaada(every thing is illusion) now known as advaita( also it says there is no difference between soul and brahma the supreme power)). 21st commentary was from Ramanujaacharya whose interpretation of vedas was like(non differential difference) and the 22nd commentary (final) was from Acharya Madhwa(who interpreted this as differential difference that means, everything in the universe is different in many manners) , also he is the one who declared that the world/universe(Jagath) is satya(true, not maya illusion). So you can do a research on all three and choose which ever is convenient to you.

Not the answer you're looking for? Browse other questions tagged philosophy vedanta advaita vishishtadvaita dvaita .

3
Dualism & Non-dualism
1
Dwaita and adwaita: What do they mean?
24
How to read Hindu Scriptures
19
Why isn't there one Absolute Reality?
22
Are we really God?
12
According to Hinduism, who am I?
8
Can we become God?
12
Differences between Advaita & Vishishtadvaita
9
Is there a Darshana/Philosophy based on Agamas?
12
What is Advaita?
See more linked questions