Is this real image of Kaanchi Kamakshi?

I just want to know if this is the real image of Kanchi Kamakshi or an image of goddess from some other temple. Anyone who visited the temple please answer me. I am thinking this is not a real image as there is no srichakra as told in front of kamakshi. So if it was the real pic then please answer me where is the sri chakra placed in the temple? Is it placed outside the garbalaya of Kamakshi? 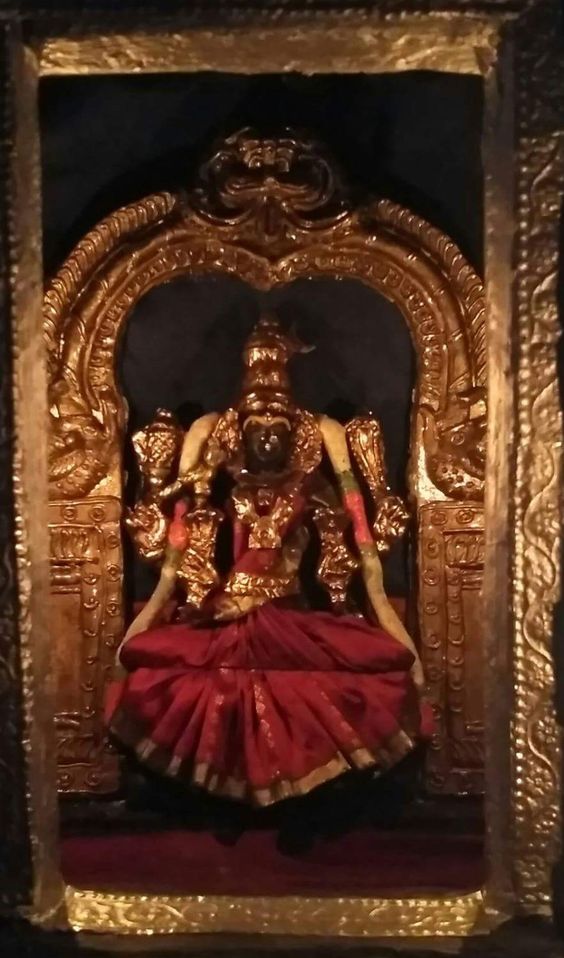 No. It is just an excellent painting, very convincing and close to the actual idol too. I had an opportunity to sit inside the gayatri mantapa for 15 minutes, as I had paid for a special pooja. The garland is a giveaway in this photo. Also other aspects - the facial features are slightly different. The actual idol is not so well polished with such clean finish unlike many modern sculptures. Also the idol has higher cheeks. The sanctum sanctorum is definitely not so well lit as there are no electric lights. There are also a couple of hanging lamps on either sides partially visible, but let's ignore that for now since they can be removed anytime. The door is also not this wide. You can't really see any gaps on the sides. Especially from the distance at which this photo seems to be taken. In fact the idol of 'tapa kamakshi' which is right next to the main idol is missing in this photo. In reality that idol is also not visible from far unless you are sitting closer to the sanctum in the gayatri mantapa. The hollow which is right in front of the sanctum sanctorum's threshold is also missing in this photo. It is right in front of the threshold and it is only by carefully lifting the feet along the sides, the priests enter the sanctum sanctorum. The hollow is mistaken by many for srichakra. But it just is a dent in the ground that symbolizes navel (of sati since it is a shaktipeeta). The hollow is filled with flowers most of the time, in fact the idol is just symbolic and the actual deity is believed to reside in the hollow. This is believed to be the opening in the ground from where the goddess appeared in order to kill bhandasura (some local legends only). May be a gold/brass srichakra is placed in that hollow, hence leading to this misconception.

In fact this idol was consecrated by Adi Shankaracharya when he established kamakoti peeta. Before that the Adi kamakshi idol which is now located in the adjacent street was considered as moola kamakshi. There the deity is depicted as holding a kapaala (vessel to drink blood/wine). Adi Shankaracharya gave a calmer representation for the deity with a depiction of sugarcane and flower arrows. He reconsecrated kamakshi in this new temple.

Not the answer you're looking for? Browse other questions tagged temple identification-request devi .

8
Who is the sage Pundarika who saw Vishnu coming out of a Shiva Linga?
15
Request to identify swastika motif/yantra seen at temple in Hawalbagh, Almora