One astrologer at Kakinada told us that Lord Venkateswara is actually the Goddess Bala Tripurasundari, with long hair at the back. Hence the name Balaji!

Here's the experience of Swami Brahmananda at Tirumala: (God Lived With Them, page 106, bottom)

In Tirupati Maharaj [Swami Brahmananda] saw the Divine Mother in the image of Lord Venkateswara. His body shivered in ecstasy. Later he said to Sharvananda: "I have distinctly seen the form of the Divine Mother. Please inquire about it." After inquiry and close examination of the image and sanctuary, it was found to have been originally a Shakti temple, later converted into a Vishnu temple, probably under the influence of Ramanuja. 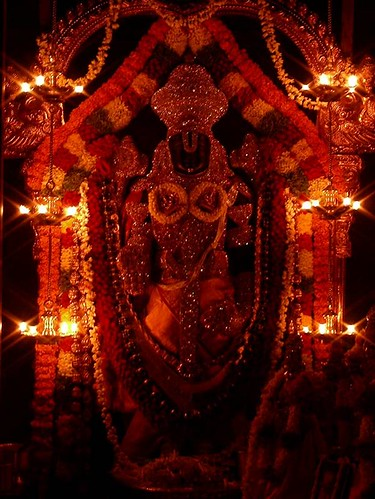 Another claim is found here.

The idol in Tirupati temple :

Legend has it that Ramanujacharya took over the temple from jains and driven away jains from south India. To win over the Jains, he presented the deity with golen sankh and chakra, which were not there originally (for which he added a story that these were given away by lord Balaji to warring Tondaman Chakravarthy).

However, it is not the Jain Thirthankara's idol but Devi Bala Tripura Sundari's. Earlier to jains, it was worshipped as Kumara Swamy for ages. prior to that may be many others too might have worshipped it considering it as their dieties.

In support of claiming it as Devi's idol, there are many evidences. Few among being:

What do scriptures say?

A Srimperambudur manuscript also admits that the deity was worshiped as Shiva until the time of Rāmānuja and that ‘he established the forms of worship, of offering food, of bathing the deity and other ceremonies which are still going on’. A reference also shows that among the special utsavas performed at the temple, there is one which is called Shivarātri chatra pālaka utsava (possibly Kṣetrapālaka) - ceremonies performed to the guardians of the holy place. We have no information whether this utsava is now performed openly as before, but the observance of the festival clearly proves that the earlier Vaiṣṇavas had not only no objection to acknowledge that the place belonged to Shiva but were liberal enough to respect Shaivite sentiment by continuing the special utsava in honor of Shiva. Similarly Varalakṣmī grata and Vināyaka caturthī were also preserved. Reference: Tirumala Tirupati Venkateshwara - Shiva-Vishnu Controversy

Association of Sri Venkateshwara to Sridevi:

The Gayatri associated with Venkateshwara Ashtakshari is:

No, the murti in Tirumala is that of Lord Vishnu. I quote from the book of Dr. N. Ramesan, who was the Chairman of TTD, see Chapter V of this book.

Mother Lakshmi is carved out on the right chest of the mula murthi and is an integral part of the idol. The yajnopavtiam and a set of four necklaces or ornaments can also be seen clearly made out on the idol.The arms have armlets. The figure is depicted as wearing dhoti from the waist downwards while the upper portion is not covered by any dress... The Lord's image has on the shoulders marks resembling scars made by constant wearing of bows and arrows.

The presence of yajnopavitam and Lakshmi on the right chest clearly establishes that the deity is none other than Lord Vishnu. As far as the presence of lions on the Vimana is concerned, both Vaikhanasa and Pancharatra agamas permit the presence of either lion or garuda on the vimana. Again, I quote from Dr. Ramesan's book.

Both Vaikhanasa and Pancharatra agamas which govern a Vaishnava temple, clearly lay down that either a lion or garuda may be placed on the corners (of the Vimana). The Agamic rules require that not only on the top of the vimana but also on the mantapas either a lion or a garuda should be placed. Normally, a lion is selected to overcome the enemies of the area, when the location of the temple is such where recurrent invasions are expected. If a temple is situated in a remote and secluded corner, garuda is chosen mainly for spiritual and cultural ends.

Moreover, the vimana was built by Vira Narasinga Yadavaraya of 13th century. The shilpis chose to carve out lion on the vimana in honour of the patron. In light of these evidences, it is crystal clear that the Lord Venkateshwara is none other than Lakshmipati Lord Shriman Narayana.

3
Do devotees of the goddess Tara sit on six-month old babies?
4
Are non-Hindus allowed inside Tirumala Veṅkaṭēśwara Temple? Do they need to sign a waiver?
6
Is Vaikuntha or Brahman the supreme abode of Vishnu per Vishnu Purana?
13
What is the importance of Goddess Radha in Shaktism?
4
If some of the early Alwars used to consider Venkateswara as Shiva and Vishnu both then what's the proof of it?