What are the correct mantras while giving arghya to Surya?

I only chant om suryay namah but now I want to learn complete mantras while giving arghya to Surya and should we also chant the Gayatri mantra? As a Brahmana (Brahmin) what else should I do beside praying to God Surya in the morning?

In Bhavishya Purana a lot is found on Surya worship as the text considers Surya as the supreme deity. In it, we find Shri Krishna advising son Samba on how to correctly worship Surya Narayana.

As per that, the mantra to be used while pouring the Arghya is a mantra called as the Shakshatkara mantra of sun.

Quoting from the book "Essence of Bhavishya Purana":

(Bhagavan Suryanarayana is the readily available vision to the eyes in the whole Universe beyond whom could be no other Deity; the entire ‘Jagat’ has emerged and also terminated only by him.) Time measurement is facilitated only by him since the earliest Satya Yuga; he is the unique cause for the Presence of Grahas ( Planets), Nakshatras (Stars), Yogas, Karanaas, Rashis, Aditya, Vasu, Rudra, Vayu, Agni, Ashvani Kumaras, Indra, Prajapati, Dishas, Bhuh, Bhuvah, and Swah. Besides, he is the permanent ‘Saakshi’ (Evidence) of Mountains, Rivers, Samudra, Naga and all other ‘Charaachara’ or Stationary and Mobile Beings; the World wakes up with him and sleeps due to him; Vedas, Shastras and Itihasas are never tired of praising him as Paramatma, Antaratma and such other truisms; he is present every where, he is eternal and he is all-knowing; and he is the only and distinctive refuge-point to every one always. Having said this, Lord Shri Krishna advised his son Samba about the method of regular and daily worship so demolish sins and ‘Vighnas’ (obstacles). Early morning, before Sun rise, one should complete the ablutions, bathing, wearing clean clothes and offering ‘Achamana’or sipping of three spoonful water by reciting Kesavaya Swaha, Narayana Swaha, and Madhvavaya Swaha etc.and offer ‘Arghya’ (water with both the palms) to Suryanarayana by mentally reciting the ‘Sakshaatkara Mantra’ viz. OM KHAKHOL -KHAYA SWAHA; perform Tri-vidha Praanaayaama of Purak, Rechak and Kumbhak or the inhaling, holding and exhaling the four kinds airs viz. Vayavi, Agneyi , Mahendri and Vaaruni for attaining ‘baahyaantara suddhi’or external and internal purity by means of ‘Soshan’, ‘Dahan’, ‘Stambhan’ and ‘Plaavan’ of one’s body. Then, one has to integrate the ‘Sthula’or the physical and ‘Sukshma’ or the miniscule ‘Indriyas’ or limbs. Thereafter one has to perform ‘Anganyasa’ as follows:


So, as per this particular Purana, the needed mantra is " OM khakhol khaya swaha". The mantra has to be mentally recited while offering the Arghya.

Regarding, what else you have to do in the morning as a Brahmin, apart from offering Surya Arghya, you can ask a separate question on that.

The book "Nitya Karma Puja Prakash" (you need to start reading from page 79 of the book to understand the whole procedure also you need to understand Hindi language) gives another method of offering Surya Arghya that is a bit more elaborate compared to the method of Bhavishya Purana.

Here is a screenshot from the book: 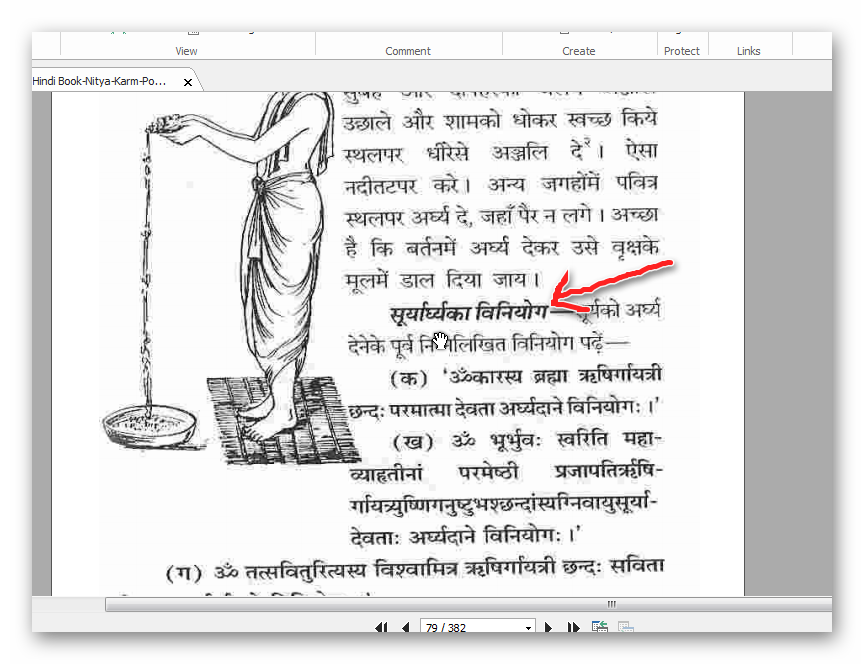 As you can see in the image, here you have to first read 3 Viniyoga mantras before offering the Arghya.

As proofs of these statements the book cites Smritis and Devi Bhagavatam.

The 3 Viniyoga mantras to be chanted (in the given order) are as follows:

After that, you have to offer the Arghya by chanting the Gayatri mantra "Om Bhur bhuvah swah tatsavitur-varenyam vargo devasya dhimahi, dhiyo yo nah prachodayath || and then finally saying the mantra "Brahmaswarupine surya-narayanaya namaha".

As a Brahmana (Brahmin) what else should I do beside praying to God Surya in the morning?

The most important activity that, not only Brahmins but everyone, can do in the morning to worship Surya is to do Surya Namaskara. There are several variants with minor differences in the steps, but each of them has 12 steps.

Each of the 12 steps has a namo-mantra of Surya. Or you can do 12 repetitions of the whole sequence, using one namo-mantra for each repetition.

As for general chanting or meditation, there are many options.

The most famous and significant mantra is the Gāyatrī Sāvitrī (RV 3.62.10):

And of course, the famous Āditya-hṛdayam stotra which originally occurs in Ramayana's Yuddha Kanda (chapter 107).

I am a practicing Brahmin and this is how I have been giving tarpan to Surya every morning since I read this portion of Devi Bhagavatam by Veda Vyasa some years ago.

In Eleventh book of Devi Bhagavatam Chapter 24, nArAyana tells nArada that if one offers Tarpanam with one palmful of water, repeating the mantra “Sûryam Tarpayâmi namah”, the pending evils are also averted and troubles are ceased -

2-20. Nârâyana said :-- O Nârada! The question asked by you is esoteric. Never divulge this to a wicked person or any hypocrite. It is to be kept secret. While doing this S’ânti Karma, the Brâhmanas are to perform the Homas with fuel soaked in milk (Payah). If the fuel of the S’amî tree be offered in Homa ceremony, then diseases caused by planets are cured. If the Homa be performed with wet As’vaththa or Udumbara or other ksîra trees, the diseases caused by demons and hob-goblins are cured. If one offers Tarpanam with one palmful of water, repeating the mantra “Sûryam Tarpayâmi namah”, the pending evils are also averted and troubles are ceased. The repetition of the Gâyatrî mantra with knees immersed in water averts all evils. The repetition of Gâyatrî with body immersed in water upto the throat, averts the danger of life; and the same with whole body immersed grants all success. This is the best of all the S’ânti karmas, the acts that bring health, wealth, happiness and peace. While performing Homa, light with the fuel of Ksîravriksa...........

I think you should say "om bhur bhuva swaha tatsavitur varanyam bhargo devasya demahi dheeyoyo na prachodyat". This should be said 3 times. You should also do gayatri mantra which is very powerful. But this question cannot be answered since it depends on somethings.

Not the answer you're looking for? Browse other questions tagged mantras rituals brahmins surya vedic-rituals .

11
What are duties and goals of a Brahmin and how should he behave?

6
What scripture does the original Achamanam mantra come from?
11
What is the meaning of Swadha?
8
Benefits of “Suryaopassna” (सूर्योपासना) or Sun worship described in Vedas and upanishdas?
1
Is it ok if I misspell the mantras as I am a beginner?
6
What is the story of the Naga Padmanabha dragging the chariot of Surya?
9
What does it mean when it's said that an entire Vedic Sukta was revealed to the Saptarishis?
1
Giving Arghya to Surya even when not visible?