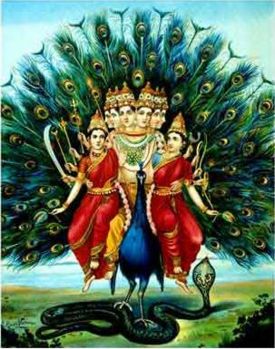 I recently was reading on Wikipedia :

Kartikeya is an ancient god, traceable to the Vedic era. Archaeological evidence from 1st-century CE and earlier,[9] where he is found with Hindu god Agni (fire), suggest that he was a significant deity in early Hinduism.[5] He is found in many medieval temples all over India, such as at the Ellora Caves and Elephanta Caves.

I also read about

Where Shanmukh or six faced, should be a name of Kumara Itself. What and where are the historical origin of the cult of Lord Kartikeya ,other than the Yajurveda mentioned here, especially connected to Lord Shiva's Family?

In Mahabharata, Shalya parva, Chapter 44. The origins story of Skand (Lord Kartikeya), is described as follows:

In days of yore the vital seed of Maheshvara coming out, fell into a blazing fire. The consumer of everything, the adorable Agni, could not burn that indestructible seed. On the other hand, the bearer of sacrificial libations, in consequence of that seed, became possessed of great energy and splendour. He could not bear within himself that, seed of mighty energy. At the command of Brahman, the lord Agni, approaching (the river) Ganga, threw into her that divine seed possessed of the effulgence of the Sun. Ganga also, unable to hold it, cast it on the beautiful breast of Himavat that is worshipped by the celestials. Thereupon Agni's son began to grow there, overwhelming all the worlds by his energy. Meanwhile (the six) Krittikas beheld that child of fiery splendour. Seeing that puissant lord, that high-souled son of Agni, lying on a clump of heath, all the six Krittikas, who were desirous of a son, cried aloud, saying, "This child is mine, this child is mine!" Understanding the state of mind of those six mothers, the adorable lord Skanda sucked the breasts of all having assumed six mouths.

There are a lot of ambiguity in regards to the origins of Lord Kartikeya or Lord Muruga. Apart from the Sanskrit literature you quoted, the Chandogya Upanishad 7.26.2 has a reference to Sanatkumara whom is regarded as Lord Kartikeya in this context.

It seems there are lots of reference in Tamil literature. However, as per the definition of Hinduism in this post - Who is considered Hindu?, we may not be able to accept those literature. Then again there are no standard benchmark on which literature should be within the accepted references for Hindus.

There is an academic work provided here as well for more information: http://eprints.um.edu.my/14467/1/0001.pdf

Not the answer you're looking for? Browse other questions tagged shiva kartikeya .

12
Who is considered Hindu?

20
Why is Kartikeya not worshiped much compared to lord Shiva, lord Ganesha and goddess Parvati?
8
Wives of Lord Kartikeya
6
Is Kartikeya, son of Lord Shiva, still Chief Leader (Senapati) of Deva/Devta's army?
3
Has Kartikeya kill any other demons other than Tarakasura?
8
What is the reason behind Lord Kartikeya holding a rooster flag?
6
Do any scripture portrays Lord Kartikeya (Murugan) to be the Supreme God?
5
Why is Lord Kartikeya called 'Devasenapati'?