Did Hindu people eat the meat of Bulls and Oxen, but not the Cows?

Did the Hindu people eat the meat of Bulls and Oxen, but not the cows?

Satapatha Brahmana 3.1.2.21 says not to eat the flesh of Cow & Ox because they support everything. And there occurs complete destruction if we eat their flesh. 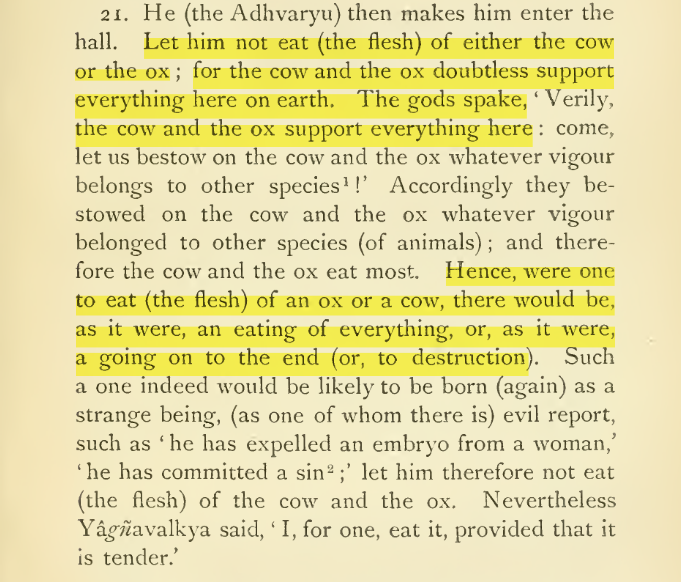 You're right. As author Om Prakash explains in Food and Drinks in Ancient India, during the early Vedic period, Hindus ate beef mainly sourced from oxen, bulls and barren cows.

Meat eating is mentioned as early as the Ṛgvedic period. Fire is called the eater of ox and barren cows. The ritual offerings of flesh implied that the priests would eat it. A goat is also offered to fire to be carried to forefathers. A barren cow was also killed at the time of marriage obviously for food. Fish is mentioned in the Ṛgveda but it is difficult on the basis of this reference to conclude that the Ṛgvedic Indians consumed fish.

A slaughter house is also mentioned. The flesh of horses, rams, barren cows, sheep, and buffaloes was cooked. Probably flesh of birds was also eaten.

In the later Vedic period it was customary to kill a big ox or a big goat to feed a distinguished guest. Sometimes a cow that miscarried or a sterile cow was also killed. Atithigva also implies that cows were slain for guests. Many animals, cows, sheep, goats, and horses continued to be killed at sacrifices and the flesh of these sacrificed animals was eaten by the participants. Many words in the sense of fishermen are used in the Yajurveda which makes us infer that the Aryans had included fish in their diet by that time.

Of the meat preparations the most common in the Ṛgvedic period were flesh roasted on spits, and boiled in pots. The latter was eaten with great relish. Meat cooked with rice was much valued as food in the Upaniṣadic period.

Some notion of pure and impure meat was present even in the days of the Ṛgveda. A man cooked the entrails of a dog in extreme destitution. The cow, on account of its usefulness and the many blessings it provided was considered aghnyā (not to be killed). Sterile cows could perhaps, be killed a little more freely.

Vegetarianism was perhaps also not unknown to the Ṛgvedic Aryans. A devout offering of praise or of fuel stick or cooked food was considered as good as a more solemn sacrifice. Then there is a whole hymn addressed to Pitu (nutriment) which mentions all the articles of food except meat. In the later Vedic period a feeling of revulsion against meat eating, especially beef, is found in almost all our works. The Atharvaveda regards beef eating as an offence against forefathers (Pitṛs). Bṛhaspati, it is said, takes away the progeny of those who consume a cow. There was also an injunction against the. slaughter of horses in a sacrifice. People who observed a vow, generally, abstained from meat diet and Brāhmaṇas took only sanctified meat and that too of pure animals.

Not the answer you're looking for? Browse other questions tagged food cows .

92
Why can we eat 'living' plants but not 'living' animals?
6
Did Swami Vivekananda eat fish and meat before he turned a sannyasi? Did he continue eating fish and meat after?
3
Why are Kshatriyas allowed to eat meat and other castes aren't?
2
Did Rantideva kill cows and cook in his kitchen to feed the hungry?