Wolves appear often in religion, with many wandering, houseless people/deities having wolves as companions Why, then, are there no domesticated dogs?

Wolves are commonly mentioned in religion, appearing as beloved companions of many deities. Domesticated dogs, who are known as Man's best friend have no representatives on the other hand. I find this to be one of the greatest mysteries in religion, as whatever the reason, it is going to be a grand revelation.

Keeping pet dogs is not recommended. That's why you might never find stories of pet dogs in Hindu scriptures.

The following verse is relevant:

Gods do not eat the food of a man who keeps dogs, who is married to a Sudra woman, who is controlled by his wife, or who lets his wife’s lover remain in his house.


The simple meaning of this verse is gods won't accept Pujas and offerings from households where dogs are kept as pets. So, while many do it nowadays, the act does not have the approval of certain Hindu scriptures.

While in the Indo-European traditions , gods were associated with Wolves often submitted to them and not dogs is quite understandable: Wolves represents the undomable instincts that needs to be submitted under an authority.

But in Hinduism it plays different roles. In Hindu mythology, the dog is the most inauspicious of animals, to be kept away from wedding altars and holy sites. A howling dog becomes a harbinger of bad luck. Infact, even the sight of a dog is considered to bring bad luck.Why is it so? Dogs are such lovable creatures, obedient and affectionate. Even in the Rig Veda, the role of a dog as a protector, is acknowledged when Indra sends the mother of dogs, Sarama, in search of missing cows.

The dog is a territorial animal. For the dog, even the master is territory that it will not share. Even when domesticated with all needs fulfilled, the dog needs to mark its territory by raising its legs and spraying its urine. Threaten this territory and the dog will turn on you. This behavior, the ancients realized, is not something to be celebrated in human beings.

He who helps us overpower this fear is Bhairava. This form of Shiva terrifies us because it mocks our primal territorial instinct. In temples such as Kal Bhairav in Delhi and Varanasi, Bhairava is worshipped with alcohol. Alcohol clouds judgment.From a clouded judgment comes this warped understanding that from territory comes identity. The industrialist forgets that even if he clings and fights for his territory, one day Yama, the god of death, and his Sarameyas, will take him away from his territory. So it will be with the politician and the bureaucrat and the writer and the artist.

Our material, intellectual and emotional territories that we jealously guard, whose loss makes us insecure, is no different from the bone of a dog. We cling and fight over it, until the day we die. And when we die and our bodies reach the crematorium, we find there an inebriated Bhairava seated on a dog laughing at us for a life wasted in a futile pursuit. 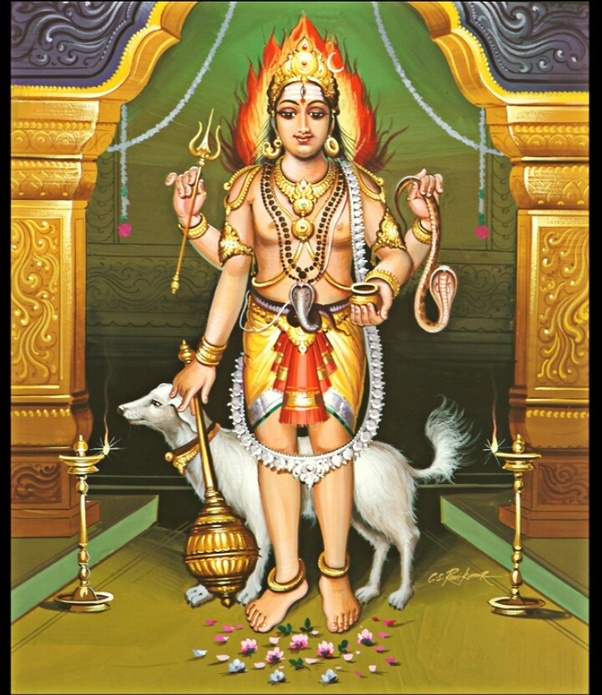 Not the answer you're looking for? Browse other questions tagged scripture culture other-religions dream human .

15
Why Dattatreya is shown surrounded by 4 dogs and cow?
9
Did the story of Mahabharata start (and end) with a dog?