Can cremation be done after sunset? What do scriptures say about the timing of cremation?

A recent news report says that the dead body of a rape victim was cremated by Indian police very late in the night:

"We wanted the last rites to be performed according to the Hindu traditions. Despite our protests, the cremation was performed. They took the body forcefully. We couldn't see our daughter's face for the last time," the woman's father told NDTV.

At 2:30 am, while most of her family was home, the police cremated the body.

And one of the commenters under the article says:

I am so petrified. According to scriptures, no one should be cremated after sunset.

Neither Indian law nor Hindu law is followed in UP.

What do scriptures say about the timing of cremation?

If the commenter is right, how is that the burning ghats of Varanasi operate 24/7? Is it because Varanasi is a special place and the timing of cremation doesn't matter at this place? 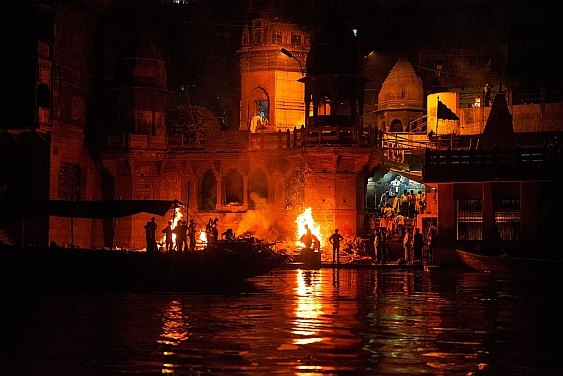 The burning ghat in Varanasi, India's oldest city, glows as burning pyres continue through the night.

Cremation can be done after sunset. In fact, it appears that there exists a Sastric injunction that if one fails to perform the cremation within 10 hours from the time of death then that creates a Dosha which is to be remedied by performing a particular Prayaschitta. So, in certain cases, the cremation has to be done in the night only.

My reference here is the book "Apara Kriyas and Shraddham":

Similarly many other doshas, for which prayaschitta is required, are listed in Dharma Sastra- vomiting, oozing of blood, passing of urine and stools while dying or afterwards, wearing dirty dress, failure to perform Nitya karmas in state of unconsciousness etc., dying in night, in case of women- impurity of delivery or menses, dying of thunder, rain, flood, fire, poison etc., and failure to cremate within twenty five nazhigais (10 hours).

The current practice of postponing cremation long after death occurs has no sanction in Sastras. It is cruel to the dead person as the Jiva has already left the body and he is made to experience severe suffering of not only hunger and thirst but also of separation from the body he loves which is still on the ground. Hence, cremation should not be postponed for flimsy reasons like the son is abroad and has to come etc. It is only for such emergencies that the order of priority of Kartas has been clearly spelt out in the Sastras. Hence, cremation should be performed immediately after death occurs, at the hands of the available Karta in the order of priority. This is very important.

“Various types of sins, massive as the Meru and Mandara mountains, abide in my hairs. Hence I shave off the hairs.” For Gnatis, Vapanam is on the tenth day. In the case of death of father or mother, even if it is Friday, and even if cremation occurs in the night, Vapanam and Pindodaka danam by Karta should be done immediately. In the case of death of others, the Vapanam should be done the next day.

As the dress of the Preta has been burnt, he feels naked and shy. In order to avert that feeling, the Karta gives dress required for ten days with dakshina, ghee, Til, Urid dal, food grains, vegetables and bronze vessel as Danam to Brahmanas. This is called Nagna Prachchadana Sraaddham. This should be done immediately after the cremation, if cremation is done in daytime. If cremation is done in night time, in the case of father or the mother this Sraaddham should be done immediately; in the case of others, the next day. After the Sraaddham, Karta will enter the home along with Gnatis carrying Deepam. The house should have been purified before the return of the Karta with cow dung and water and Punyahavachanam.


So, although, as this books says, that there are scriptural injunctions regarding the topic but I was not able to find them directly from some scriptures.