Who is Goddess Gayatri? Is she another form of Saraswati or Saraswati in Parashakti form?

Summary: Is Goddess Gayatri another form of Savitri (Saraswati) or Savitri in Parabrahman form?

If yes, can we conclude that the word ‘Savita’ in the Gayatri mantra is representative of Savitri and mantra as such is dedicated to her; and hence called Gayatri Mantra? 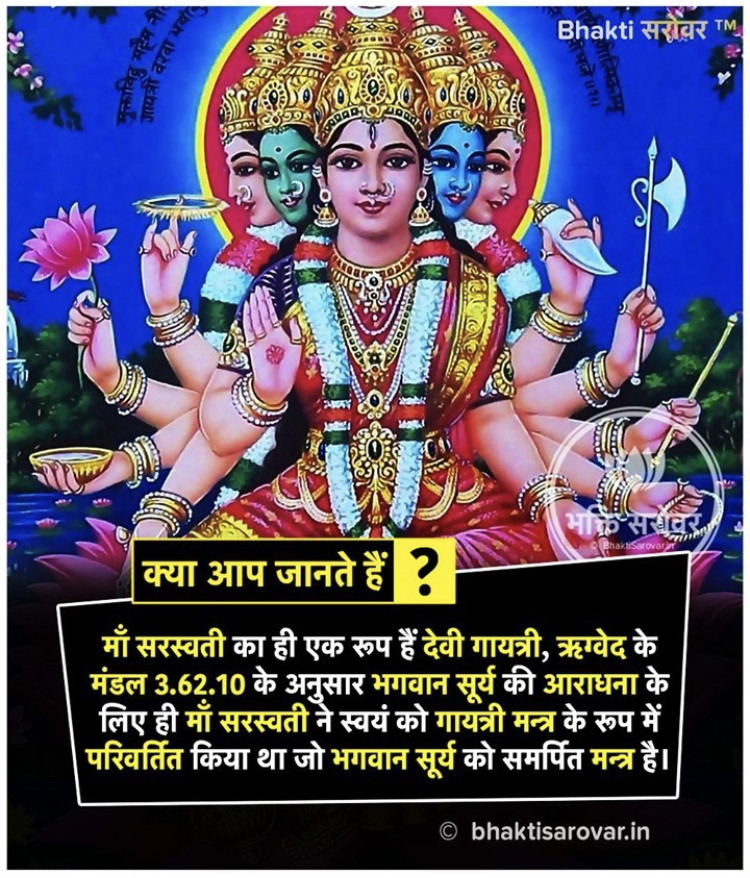 Gāyatrī at the (time of the) recitation of the Vedas; Pārvatī near Śiva; Indrāṇī in the heaven; Sarasvatī in the mouth of a brāhmaṇa.

(However in the same section there’s another story of a cowherdess named Gayatri, to whom Brahma is married. She seems to be different from the Gayatri form of Saraswati) 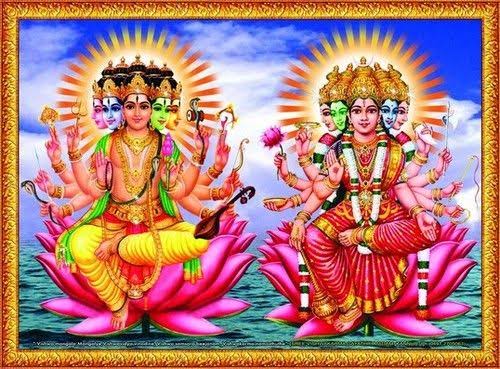 Based on the above statements, can it be concluded that :-

(i)Saraswati (Savitri) and Gayatri are one and the same or merely different forms of the same goddess?

(ii) Gayatri is the Parashakti form of Saraswati and Vishwakarma is the Parabrahman form of Brahmaji, just like when talking of Devi Durga as Parabrahman she is represented as Adi Shakti?

If we conclude that Savitri (Saraswati) is the same as Gayatri, -

Further merely based on any dhyana shloka being different, can they be considered separate goddesses?

Kindly note this is not a duplicate of- Was Goddess Gayatri really a cowherdess?

Those who do a detailed Sandhya Vandanam three times a day, are aware that they have to invoke Goddess Gayatri using three different Dhyana Slokas during the three Sandyas (morning, mid-day and evening).

1-24. Nârâyana said :-- O Nârada! Now I am speaking of the auspicious midday Sandhyâ, the practice of which leads to the wonderfully excellent results. Listen. Here the Âchamana and other things are similar to those of the morning Sandhyâ. Only in meditation (Dhyânam) there is some difference. I will now speak of that. The name of the midday Gâyatrî is Sâvitrî. She is ever a youthful maiden, of white colour, three-eyed; She holds in Her one hand a rosary, in Her other hand a trident and with Her two other hands She makes signs to Her Bhaktas to dispel fear and to grant boons. Riding on the bull, She recites the Yayur Vedas; She is the Rudra S’akti with Tâmo gunas and She resides in Brahmaloka, She daily traverses in the path of the Sun. She is Mâyâ Devî, beginningless; I bow down to Her. After meditating on the Âdyâ Devî Bhagavatî perform Âchamanas and other things as in the morning Sandhyâ.

In the evening time meditate on the Bhagavatî Sandhyâ Devî thus :-- The name of the then Gâyatrî Devî is Sarasvatî. She is old, of black colour, wearing ordinary clothes; in her hands are seen conch shell, disc, club and lotus. On Her feet the anklets are making sweet tinkling sounds; on Her loins there is the golden thread; decked with various ornaments. She is sitting on Garuda. On Her head the invaluable jewel crown is seen; on Her neck, the necklaces of stars; Her forehead is shining with a brilliant lustre emitting from the pearl and jewel Tâtamka ornaments. She has put on yellow clothes; Her nature is eternal knowledge and ever-bliss. She is uttering Sâma Veda. She resides in the Heavens and daily She goes in the path of the Sun. I invoke the Devî from the Solar Orb. O Nârada! Meditate on the Devî thus and perform the Sandhyâ. Then perform the Mârjanam by the mantra “Âpohisthâ” and next by the mantra


Gayatri Devi is also known to have various deities as her various limbs.

1-24. Nârâyana said :-- Now I am speaking of the very holy Sandhyopâsanâ method of Sandhyâ worship of Gâyatrî, the Presiding Deity of the morning, midday and evening, and of the twice-born. Listen.

Some Jâpakas (those who do the Japam) do not approve of the above nyâsa. Thus the Nyâsa is to be done. Then meditate on the Gâyatrî or the World-Mother. The beauty of the body of the Gâyatrî Devî is like that of the full blown Javâ flower. She is seated on the big red lotus on the back of the Hansa (Flamingo); She is holding the red coloured garland on Her neck and anointed with red coloured unguent. She has four faces; every face has two eyes. On her four hands are a wreath of flowers, a sacrificial ladle, a bead, and a Kamandalu. She is blazing with all sorts of ornaments. From the Devî Gâyatrî has originated first the Rig veda. Brahmâ worships the virgin Gâyatrî; on the idea of S’rî Parames’varî Gâyatrî has four feet. The Rig Veda is one; the Yajurveda is the second, the Sâmaveda is the third and the Atharva veda is the fourth foot. The Gâyatrî has eight bellies; the east side is the one; the south is the second; the west is the third; the north is the fourth; the zenith is the fifth; the nadir is the sixth; the intermediate space is the seventh and all the corners are the eighth belly. Gâyatrî has seven S’iras (heads); Vyâkaranam (Grammar) is one; S’iksâ is the second (that Amga of the Veda, the science which teaches the proper pronunciation of words and laws of euphony); Kalpa is the third (the Vedânga which lays down the ritual and prescribes rules for ceremonial and sacrificial acts); Nirukta is the fourth (the Vedânga that contains glossarial explanation of obscure words, especially those occurring in the Vedas); Jyotish or astronomy is the fifth; Itahâsa (history) and Purânas is the sixth head; and Upanisadas is the seventh head. Agni (fire) is the mouth of Gâyatrî; Rudra is the S’ikhâ (the chief part); Her gotra (lineage) is Sâmkhyâyana; Visnu is the heart of Gâyatrî and Brahmâ is the armour of Gâyatrî. Think of this Mahes’varî Gâyatrî in the middle of the Solar Orb. Meditating on the Gâyatrî Devî as above, the devotee should shew the following twenty-four Mudrâs (signs by the fingers, etc., in religious worship)

This should make it amply clear the connection between Goddesses Gayatri and Saraswati.

Well, first of all, the information given in the first graphic is incorrect. Rig Veda 3.62.10 is simply the mantra dedicated to the deity Savitṛ, in the Gayatri meter (chandas).

We shall meditate on the supreme desirable light of the deity Savitṛ. Hopefully he will inspire our intellects.

So there is nothing in this mantra that says Sarasvati transformed into Gayatri, etc. There is no direct connection or relationship between Sarasvati and Gayatri from the point of view of Vedic mantras.

Examples of mantras dedicated to Sarasvati:

Sarasvati the purifier, full of food and energy, the protector of our intellects, may she protect. The inspirer of good words, the igniter of good intellects, Sarasvati has carried the yajna. Sarasvati enlightens the great ocean. She rules over all intellects or knowledge.

So these mantras are in Gayatri chandas.

She breaks up the rocks of mountains like a digging tool, with her strong and powerful waves. We worship Sarasvati, who erodes both banks strongly, with our prayers."

Now this mantra is in Jagati chandas.

So Sarasvati has been addressed using mantras of many different chandases.

Gayatri is just the name of a chandas in Rig Veda. There is no goddess Gayatri in Rig Veda.

There has been a long tradition of personifying the Vedic chandases as goddesses. Just as Gayatri is made into a goddess, Brhati, Jagati, Shakvari are also made into goddesses.

However, Gayatri chandas is the most frequently used meter in Rig Veda. Hence, in later times, there was a new reverence for this chandas as the main mode of worship through mantras. Also, because all the other major Vedic chandases are bigger, the Gayatri chandas (24 syllables) was deemed as being contained in every other chandas. For example, Anushtup (32), Trishtup (44), Brhati (36), Jagati (48) are all bigger than Gayatri. Hence, symbolically, Gayatri is inside all these chandases, because 24 is "within" 32, 36, 44 and 48, being a smaller number. Hence, Gayatri chandas became a symbol for the the omnipresent deity.

The earliest rudimentary symbolism of Gayatri as an omnipresent deity is seen in Chandogya Upanishad 3.12:

Again, as seen above, identifying speech with Gayatri is derived from it being the smallest of all the Vedic chandases, so symbolically, it is contained inside every mantra, hence it is all speech.

In parallel, Sarasvati, who was both a river and a goddess in Rig Veda, was later transformed into a generic goddess of knowledge, speech, learning, etc. With such a broad portfolio, it is obvious that sooner or later she would be identified with all other goddesses by way of symbolic, spiritual and metaphysical equivalence. So you see later texts such as Puranas and other stotras call Sarasvati by names of all other goddesses.

This is the same as Vishnu having a thousand names, and being identified with all the deities by way of spiritual equivalence. 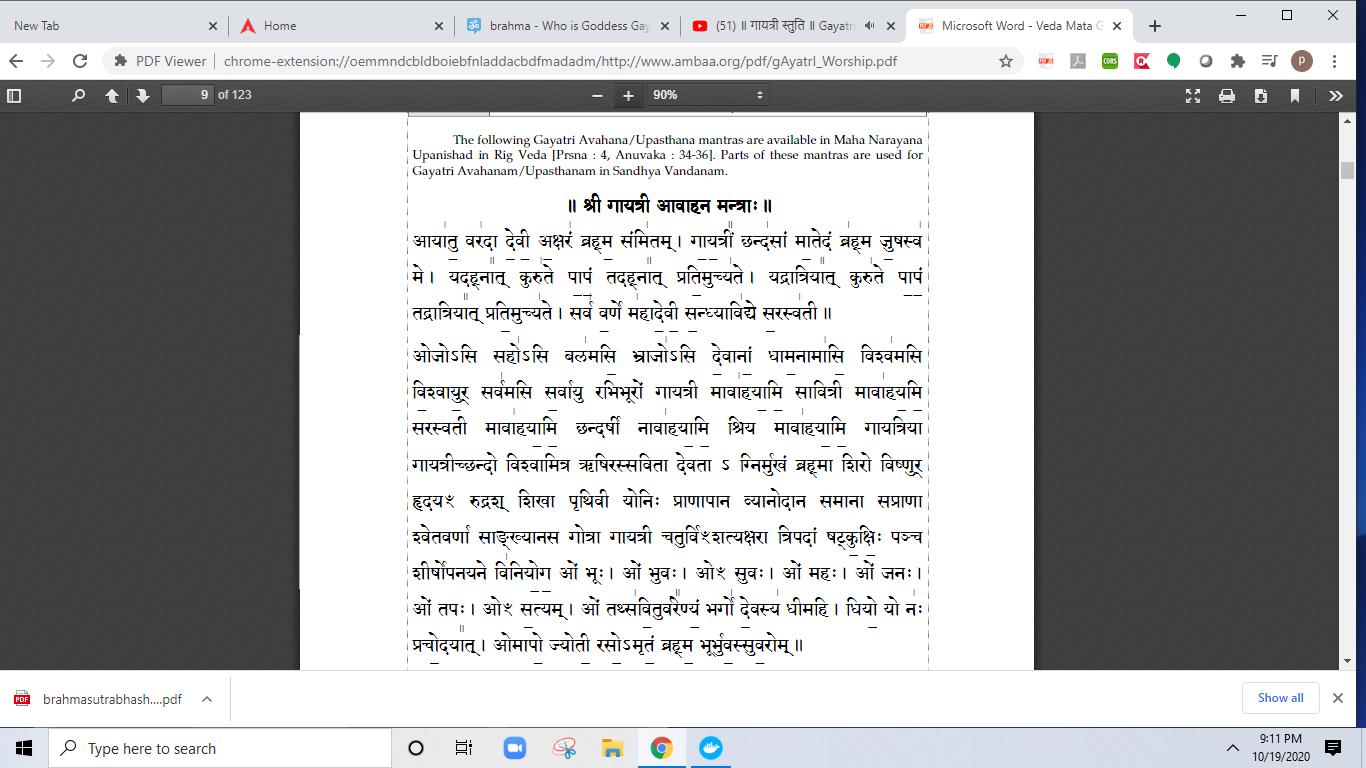 In this Gayatri Mantra described chathurvimshathi akshara, three pada, sad kushihi and pancha sirsha meaning meaning 4+1 vedas including mahabharata 6 belly 6 vedanga as stated like siksha, vykarana, nirukta, kalpa, chandas and jyotisha tripada 3 sentence starting from that ending with prachoyat if someone draws 5 head six belly and 3 leg lady that would be awful that is why we have image only with 5 heads

Here diety for mantra is savitru sun Ray's that is surya narayana. As gayatri japa's main intention to do upasena of Lord inside Sun (Surya Anthargatha Narayana) One whose color is golden hue.

Before starting Gayatri japa the above sloka is to be recited in dakshina bharathiya tradition.

Not the answer you're looking for? Browse other questions tagged brahma saraswati gayatri-mantra gayatri .

8
Was Goddess Gayatri really a cowherdess?
2
What are some texts ( or sects ) which declare Devī Sarasvati as Supreme.?
0
Why is the Gayatri Mantra so important?Who is Gayatri Devi?What is Her relation with Lord Shiva?

23
Is the Gayatri mantra used to worship the sun or Goddess Gayatri?
3
Why Lord Kartik and Goddess Saraswati are unmarried?
13
Is Mahishasura Mardini Lakshmi or Durga?
8
Was Goddess Gayatri really a cowherdess?
8
Is there a concept of Triple Goddess in Hinduism according to stages of life?