Explanation for the "spinal energy" and other "Kundalini awakening" symptoms?

Lots of people have been sharing first-hand reports of their personal experience of the so-called "Kundalini awakening". The following are a few illustrative anecdotes: 1, 2, 3, 4, 5, 6, 7, taken from YouTube and the subreddit on Kundalini.

Marjorie Woollacott, PhD and professor of Neuroscience and Human Physiology at the University of Oregon, has devoted part of her time to the research of the "Kundalini awakening" phenomenon. In her recent paper titled Investigation of the phenomenology, physiology and impact of spiritually transformative experiences - kundalini awakening (https://pubmed.ncbi.nlm.nih.gov/32753262/), she makes the following claim:

The rationale for this study was that though there are many scientific articles published on stress reduction and increased mental function related to meditation, yoga and other tools that come from spiritual traditions, peer-reviewed research on energetic or kundalini awakenings is rare. This may be due to the phenomenology of this awakening, which does not easily fit into the current materialist scientific paradigm. Nor is it easily amenable to traditional means of scientific experimentation and measurement.

To understand why Woollacott claims this, let's look at the typical symptoms of the "Kundalini awakening" syndrome.

The most frequent and distinctive one appears to be the feeling of an "energy" or "electric current" moving up the spine toward the crown of the head. Here is a quote about this from Woollacott's paper:

Energetic awakenings are often accompanied by physiological experiences. Historical texts [6,7] and modern research [22] concur that as part of the awakening and transformative process, many individuals feel energy moving up the spine toward the crown of the head, or centered in the heart. This is frequently associated with inner sounds or an experience of radiant light, a sense of joy, or a sense of deep interconnectedness with others.

The Wikipedia article on Kundalini seconds this:

The Kuṇḍalinī experience is frequently reported to be a distinct feeling of electric current running along the spine.[8][9][10]

Other symptoms and results of the "Kundalini awakening" syndrome are summarized in the following tables and figures from the paper: 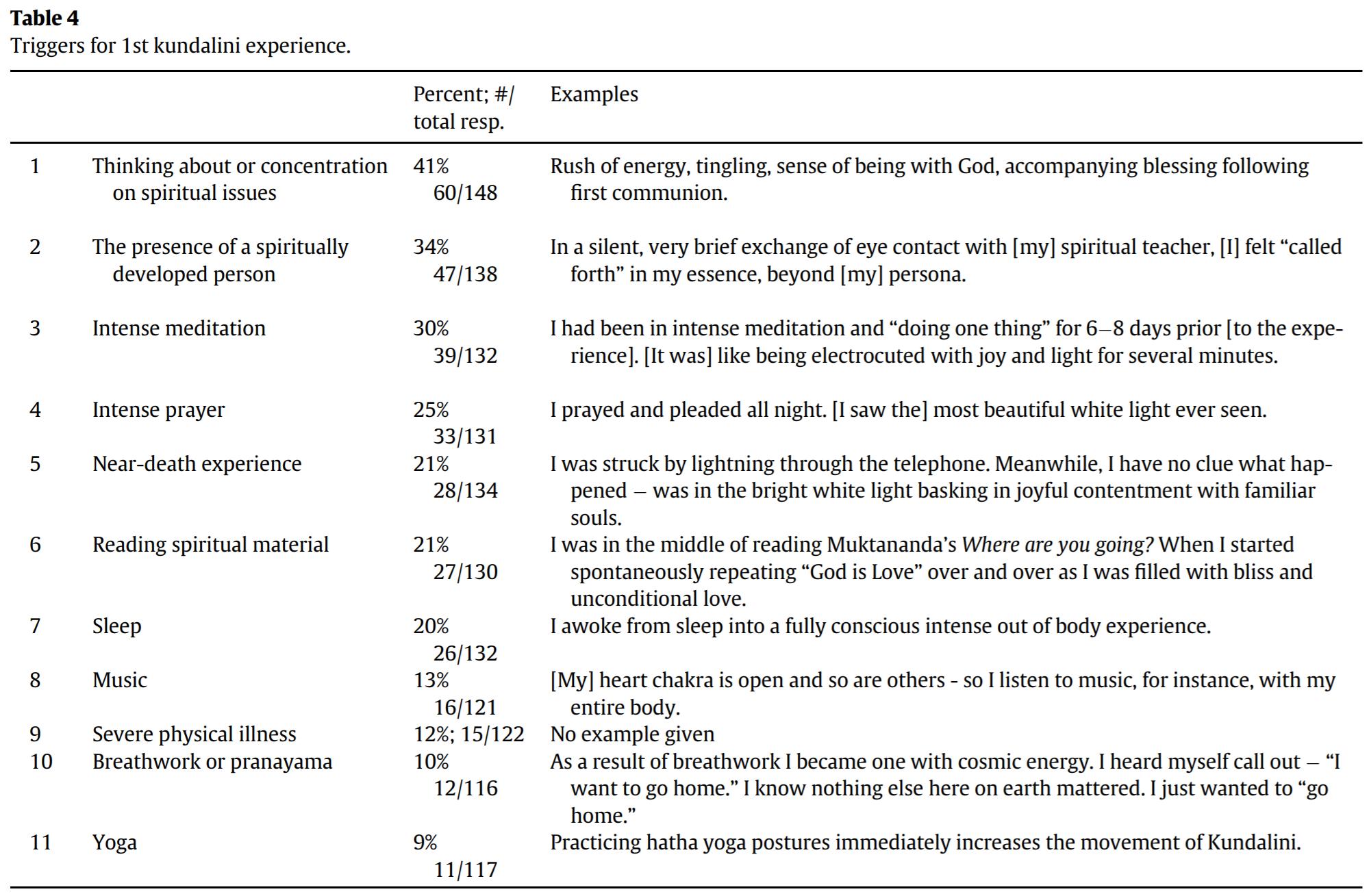 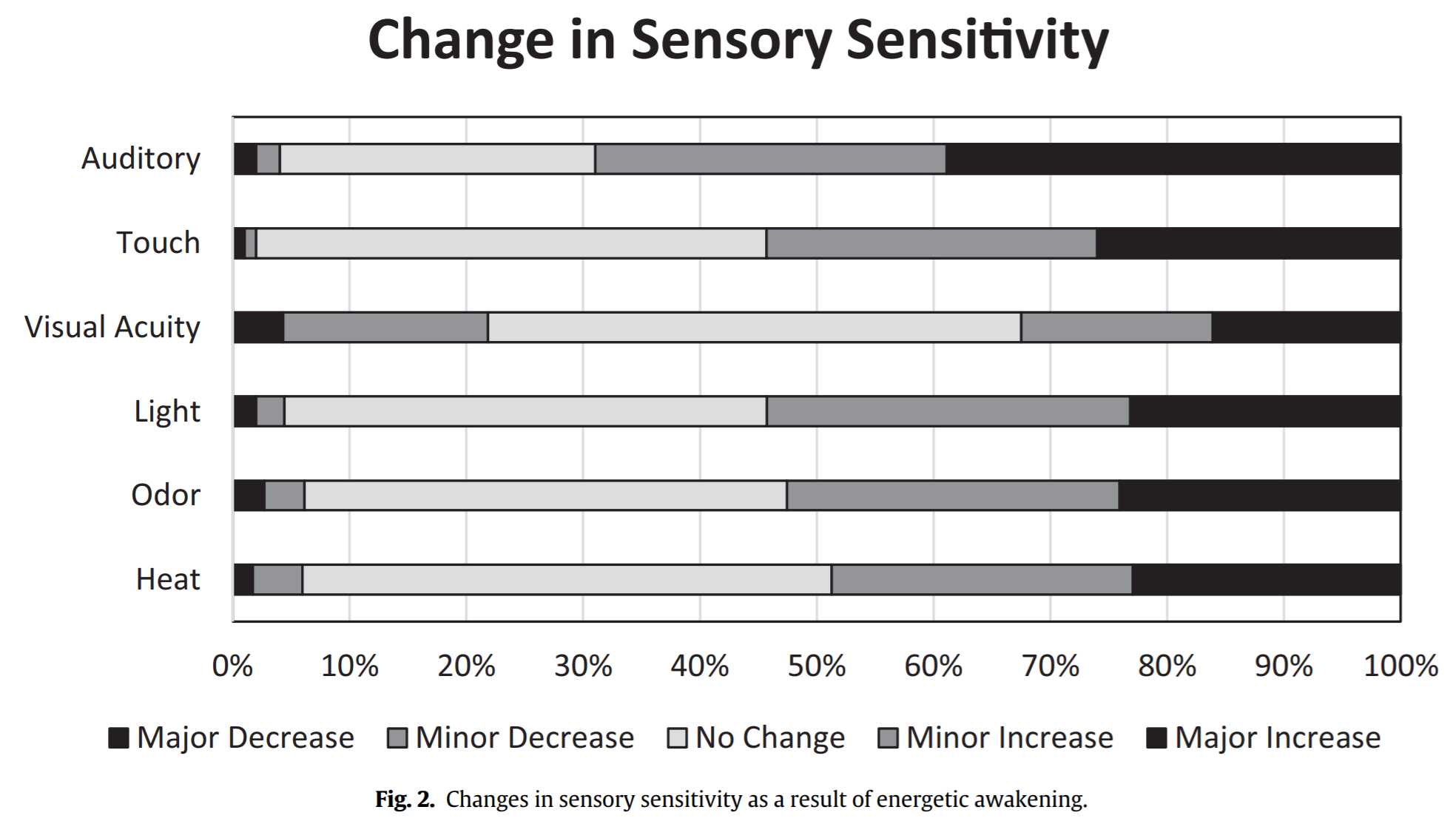 Other people holding reputable credentials who acknowledge the "Kundalini awakening" as a real phenomenon are Bonnie Greenwell (PhD) and Lawrence Edwards (PhD). Here are a couple of interviews with them: 1, 2.

Also, here is an interview Marjorie Woollacott gave to Jeffrey Mishlove, in which they discuss different aspects of the Kundalini awakening and the main conclusions of Woollacott's paper.

Bonnie Greenwell wrote a PhD dissertation titled "KUNDALINI: A STUDY OF EASTERN AND WESTERN PERSPECTIVES AND EXPERIENCES AND THEIR IMPLICATIONS FOR TRANSPERSONAL PSYCHOTHERAPISTS" (available here). She describes the phenomenon as follows:

This dissertation explores in depth the experience of kundalini awakening, a complex spiritual, psychic and physiological phenomenon which may occur in individuals spontaneously or as a result of certain spiritual practices or therapeutic processes, and discusses theories and methods which may be useful to transpersonal psychotherapists who have clients involved in this experience. People are commonly misdiagnosed and inappropriately treated by therapists and physicians when having this experience.

The dissertation identifies seven major ways in which kundalini phenomena is manifest, usually over a period of years---samadhi experiences; pranic activity which includes a wide range of body movements, vibrations, and temperature changes; spontaneous production of yogic postures or hand movements, yogic breaths, mantras or other sounds and symbols; sudden apparent physical illnesses, pains and eating difficulties; emotional upheavals, often accompanied by fear of death or insanity; seeing visions or hearing inner voices and sounds; and acquiring of psychic abilities or other occult powers.

The study reviews classical yogic literature on kundalini, and presents facts and commentaries on 23 case histories, 14 from Eastern and Western literature and 9 obtained from in-depth interviews with Western people who appeared to experience kundalini awakening.

QUESTION: What is the explanation for the symptoms people commonly report to have during Kundalini awakening, such as the feeling of an "energy" moving up along the spine, vibrations, electric currents, heat, euphoria / bliss, among others?

Whatever knowledge I have regarding Kundalini awakening largely comes from the experiences and explanations of Sri Ramakrishna Paramhamsa and Swami Vivekananda.

According to Swami Vivekananda, the Kundalini awakening is the activation of different nerve plexuses we have along the spinal column and the brain. The activation of these previously inactive interconnected nerve clusters lead to experience of different sensations and enhanced perception of the environment.

The following excerpts are from The Gospel of Sri Ramakrishna by M:

1.) "As he (Ramakrishna) sat facing the image, a strange transformation came over his mind. While going through the prescribed ceremonies, he would actually find himself encircled by a wall of fire protecting him and the place of worship from unspiritual vibrations, or he would feel the rising of the mystic Kundalini through the different centres of the body. The glow on his face, his deep absorption, and the intense atmosphere of the temple impressed everyone who saw him worship the Deity."

2.) "But the most remarkable experience during this period was the awakening of the Kundalini Śakti, the "Serpent Power". He actually saw the Power, at first lying asleep at the bottom of the spinal column, then waking up and ascending along the mystic Sushumna canal and through its six centres, or lotuses, to the Sahasrāra, the thousand-petalled lotus in the top of the head. He further saw that as the Kundalini went upward the different lotuses bloomed. And this phenomenon was accompanied by visions and trances. Later on he described to his disciples and devotees the various movements of the Kundalini: the fishlike, birdlike, monkey like, and so on. The awakening of the Kundalini is the beginning of spiritual consciousness, and its union with Śiva in the Sahasrāra, ending in Samādhi, is the consummation of the Tāntrik disciplines."

The following passage is taken from The Psychic Prana chapter of RajaYoga by Swami Vivekananda:

"According to the Yogis, there are two nerve currents in the spinal column, called Pingala and Ida, and a hollow canal called Sushumna running through the spinal cord. At the lower end of the hollow canal is what the Yogis call the 'Lotus of the Kundalini'. They describe it as triangular in form in which, in the symbolical language of the Yogis, there is a power called the Kundalini, coiled up. When that Kundalini awakes, it tries to force a passage through this hollow canal, and as it rises step by step, as it were, layer after layer of the mind becomes open and all the different visions and wonderful powers come to the Yogi. When it reaches the brain, the Yogi is perfectly detached from the body and mind: the soul finds itself free. We know that the spinal cord is composed in a peculiar manner. If we take the figure eight horizontally, there are two parts which are connected in the middle. Suppose you add eight after eight, piled on top of the other, that will represent the spinal cord. The left is Ida and the right Pingala, and that hollow canal which runs through the centre of the spinal cord is the Sushumna. Where the spinal cord ends in some of the lumbar vertebrae, a fine fibre issues downwards, and the canal runs up even within the fibre, only much finer. The canal is closed at the lower end, which is situated near what is called the sacral plexus, which according to modern physiology, is triangular in form. The different plexuses that have their centres in the spinal canal can very well stand for different 'lotuses' of the Yogi.

The Yogi conceives of several centres, beginning with the Muladhara, the basic, and ending with the Sahasrara, the thousand-petalled lotus in the brain. So, if we take these different plexuses as representing these lotuses, the idea of the Yogi can be understood very easily in the language of modern physiology. We know there are two sorts of actions in these nerve currents, one afferent, the other efferent: one sensory and the other motor: one centripetal, and the other centrifugal. One carries the sensations to the brain, and the other from the brain to the outer body. These vibrations are all connected with the brain in the long run. Several other facts we have to remember, in order t clear the way for the explanation which is to come. This spinal cord a t the brain, ends i a sort of light bulb, in the medulla, which is not attached to the brain, but floats in a fluid in the brain, so that if there be a blow to the head the force of that blow will be dissipated in the fluid, and will not hurt the bulb. This is an important fact to remember."

I hope this helps.