Does the Aitareya Brahmana ask sudras to serve the other three castes?

I'm sorry, I don't know the exact verse however I'm attaching a verse from (Aitareya Brahmana of the Rigveda, Published 1922, The Panini Office, Allahabad) 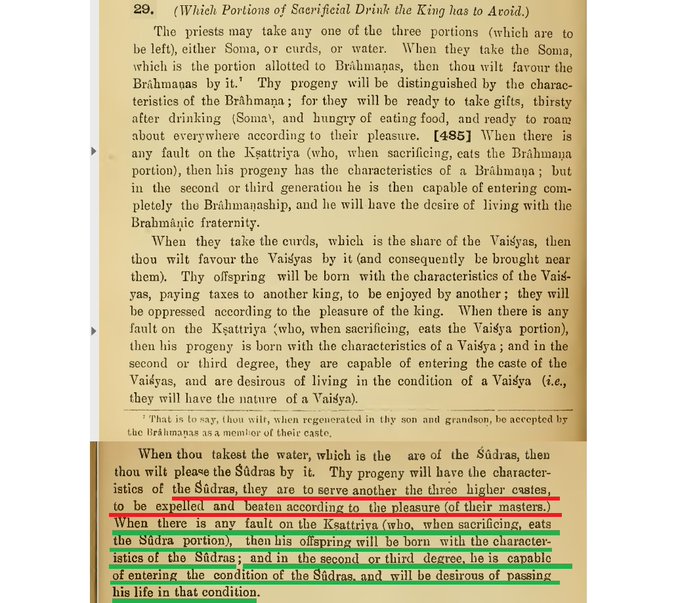 The idea that Sudras should serve the three higher varnas is there in the Gita also.

Agriculture, cattle-rearing and trade form the duty of the Vaisya springing from his own nature, while the natural duty of a Sudra consists in subordinate service under others.

Why is Gita saying this? First get rid of the idea that this verse is talking of caste as practiced by Hindus today. This is talking of varna which is linked to Guna and Karma. What the Gita is saying is that a person whose mind is dominated by Tamasa Guna should serve others whose minds have a larger influence of Sattva Guna. This would gradually help broaden the mind of a person with Tamasa Guna by seeing the conduct of the person being served and help in his spiritual advance. This is an example of Karma Yoga.

In times of yore a twofold spiritual path was taught by me. O sinless one - that of knowledge for Samkhyas (who are pure contemplatives), and that of action for Yogis (who combine detached work with devotion).

The problem with the quote in the Brahmana is the claim that drinking water or food from a person with Tamasa Guna would cause children to have minds dominated by Tamasa Guna and they should be beaten etc. When reading these type of statements in Hindu scripture, one has to remember the rules of exegesis given in our scriptures and by the greats.

Even the words heard from an ignorant person, if in themselves they be fraught with sense, come to be regarded as pious and wise. In days of old, Usanas said unto the Daityas this truth, which should remove all doubts, that scriptures are no scriptures if they cannot stand the test of reason.

Acharya Shankara, for example, in his Gita Bhasya 18.66 says:

The appeal to the infallibility of the Vedic injunction is misconceived. The infallibility in question refers only to the unseen forces or apurva, and is admissible only in regards to matters not confined to the sphere of direct perceptions, etc ... Even a hundred statements of sruti to the effect that fire is cold and non-luminous won't prove valid. If it does make such a statement, its import will have to be interpreted differently. Otherwise, validity won't attach to it. Nothing in conflict with the means of valid cognition or with its own statements may be imputed to sruti.

yuktiyuktamupādeyaṃ vacanaṃ bālakādapi | anyattṛṇamiva tyājyamapyuktaṃ padmajanmanā || 3 || The remark of a child is to be accepted, if it is in accordance with reason; but the remark of even Brahma Himself, the creator of the world is to be rejected like a piece of straw if it does not accord with reason.

The quote from the Aiterya Brahmana is undoubtedly repulsive to the modern mind. However, Hindus are not supposed to read their scripture in a fundamentalist manner. Any thing in scripture that is repulsive should be rejected since that repulsive part is not scripture. Hindus are only to seek the truth and not mindlessly support scripture where it is obviously wrong. This is not just my opinion but given in scripture itself. Even the Vedas can be questioned. So the offensive part of Aiterya Brahman should be robustly rejected.

Not the answer you're looking for? Browse other questions tagged rig-veda caste-system shudra aitareya-brahmana .

11
Do the Brahmanas of the Rig Veda mention Brahma and Vishnu's contest?
9
What is the hymn to Vishnu that Shunashepa said to save his life?
11
Is Shiva Sankalpa Suktam also a Khila Sukta of RigVeda?
6
Which scripture contains the story of Mahidasa Aitareya?
6
How come Tvasta did a Yajna to kill Indra by praising Indra Himself?
0
What is the meaning of brAhmana, as mentioned in Rig Veda II.36.5?
2
What is the basis for the story of rivalry between sage Viswamitra and sage Vasistha?
3
Where is "Reality is one, though wise men speak of it variously." in the Rig Veda?