Shiva showering gold coins, which form of him is it?

In this picture Shiva is shown showering gold coins just like mother Lakshmi is shown in many pictures of her. Which form of Shiva is it? I think God and Goddess who are receiving golds are Kubera and Mother Lakshmi. 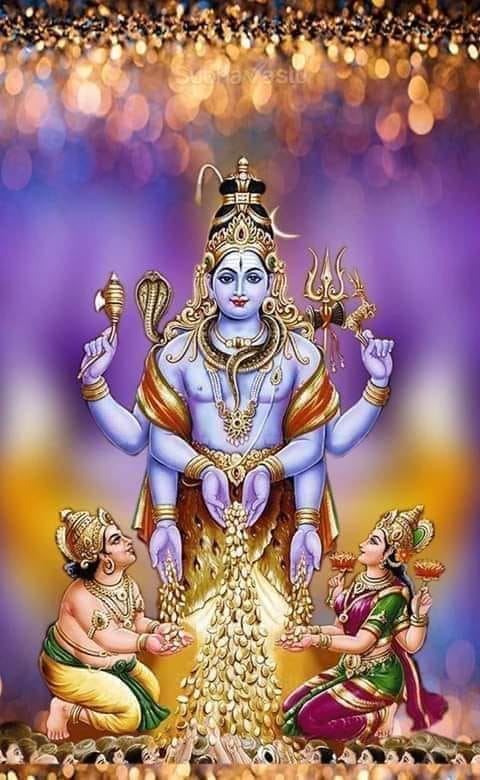 This form is also known as Shri Kuberapureeswarar Shiva or Kubereshwar Shiva.

There is a temple of this form of Shiva in Thanjavur -Tamil Nadu ( Tanjapureeswarar temple).

There is also a Legend of kubera losing all his wealth and position to Ravana his half brother and then visiting the shiva temples to get it back his glory. He travelled Thanjavur temple to worship Lord Shiva. Lord Shiva restored all his treasures on full moon day.

Kubera by virtue of his devotion to Lord Shiva , became ruler of the north. Lord Shiva placed all the wealth of the world in Kubera's charge with instructions that it will be distributed among those hard honestly and according to their fates. And thus this form of shiva is known as Kubera-Ishwara shiva.

Kubera installed Shiva linga in varanasi or Kashi as his devotion towards lord Shiva. Goddess parvati blessed kubera that this shiva linga will be known after name of kubera himself and those who worship kuberishwara linga shall never be touched by sins ,poverty or unhappiness.

This story basically the life story of Kubera and who he was in his previous lives and how he became Shiva Gana and and how he got the name kubera.

kubera in his previous births was a boy named Gunanidhi of a learned brahmna of called Yajna-Dutta. Gunanidhi after some initial years got into bad company and engaged himself in gambling and other vices like stealing. After knowing the deeds of his son Yajna-Datta the fater of Gunanidhi left his home and family and went away.

The boy Gunanidhi became poor and once hungery he saw some devotees entering into Shiva temple went inside to grab some food (prasad) to eat. Meanwhile some devotees realising his act of stealing hit him and Gunanidhi became dead. Soon the attendents of Yama came there to take Gunanidhi to hell as he had comitted all sorts of sins in his life. However , several Shiva ganas or attendents of Lord Shiva also arrived at the scene and took him with them. The attendents of Yama started to read out the sins of Gunanidhi , but shiva ganas stated that "whatever sins he committed have been wash away by some good and pious acts unknowingly done by him like lighting lamp near Shiva Linga at the night of MahaShivaratri and listening to bhajans of shiva on the same day etc. So by his meris he will be reborn again as prince of kalinga Country. So Gunanidhi took birth as Prince Dama son of king Arindama of Kalinga. Soon prince Dama started the practice lighting lamps at Shiva temples in his country.

He Installed a shiva Linga at kashi and in deep devotion and in meditation performed penance for thousand of years. Due to good deeds in his entire life and his penance lord Shiva with parvati devi appeared befor him. His eyes then started blinking due to the immense light and presence of god. He stared looking at Goddes and her beauty and started wondering about her. He did his left eye and then lost the power of the eye. Lord Shiva asured Parvati that he is your son and he does not looked at you with cruel eyes.

Then Lord Shiva granted him the boon to become the lord of nidhis (treasures) or wealth and made him king of yakshas , kinnaras and gandharvas.

159 O dear one , let your devotion be steady always. Be one with a brownish eye with your left eye lost.

160 Let those boons granted by the lord to you be so. Be Kubera (one with ugly body) by name , O son , because you were jealous of my beauty

161 The linga installed by you , shall be (known) after your own name. It will bestow Siddhis on all aspirants and it will be destructive of all sins.

162 A man who visits Kubera linga (Kuberesvara linga) shall never without wealth, friends of kinsmen.

163 The devotee should worship Kuberasa in the southern side of Visvesa . That man shall never be touched by sins , poverty or unhappiness.

Description of the Image - In the Image we can see that Lord Shiva is blessing both Kubera and Mahalaxmi with coins or wealth. This form of Mahalaxmi is known as Dhanalaxmi and Dhairya Lakshmi (Goddess of courage) . Mahalaxmi occupies her place near kubera .

So it's highly possible that this form of Shiva is called as Kubereshwar Shiva or Aishwarya Ishwar shiva.

Not the answer you're looking for? Browse other questions tagged shiva identification-request .

12
Why does lord Shiva wear a Naga (snake) around his neck?
43
Why doesn't Shiva worship anybody where as Vishnu worships him in all his incarnations?
8
Who is this figure depicted between Shiva and Parvati?
13
How did Tripura Sundari come into existence?
1
Was deed of Indra in demolishing the citadels of gold, silver, and iron, of Danavas, source for the story of destruction of 3 cities by Shiva?
5
Which form of lord Vishnu is it?