The original order of Week days as practiced/used today is completely wrong?

In the process of completing the contract for developing a software for a renowned astrologer, I came across a book of practical astrology by Samael Aun Weor.

It seems this South American wasn’t astrologer by any stretch but a spiritualist having written over 60 books including some medicine, occult, future predictions about China-Australia love(pun intended) and friendly relations of USA and Russia. His Pistochia Bible interpretation has ZERO compliance with today’s understanding of Bible. In some forums on Reddit, he doesn’t seem to be well appreciated either. However I haven’t found him in violation with spiritual principles of the East. Like caring for life and full respect for all that nature creates to live in harmony. Okay so that was author’s quick introduction of Samael Aun Weor which intrigued me.

Now here’s picture of one of the page from this book of astrology which gave me goosebumps and need to know your all opinions. 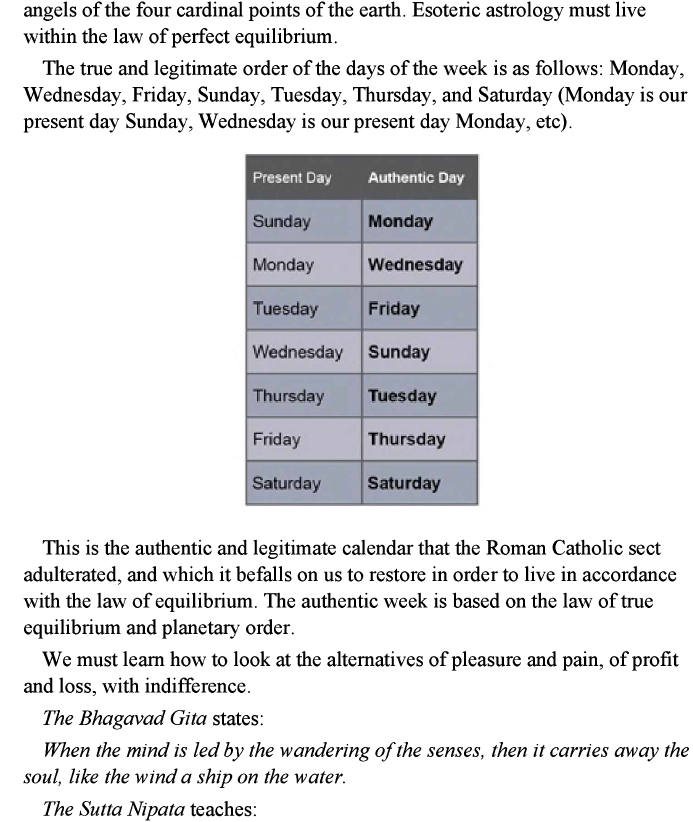 As evident planet rulers for week days have serious mismatch with what order of week days that eastern or western astrology in last 1500 or 2000 years has taught us. Per Samael, order of week days we follow as derived from hourly method is quite erroneous. 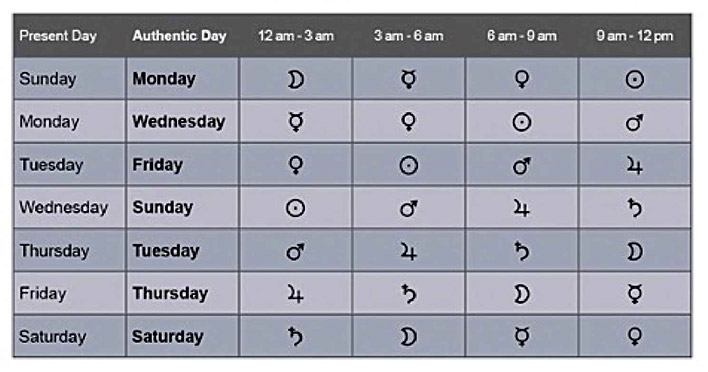 Ancient sages consider the whole day as a perfect circle which is cross sectioned in 4 different segments. Each segment (1/4th of each day) was governed by 4 out of 7 planets. Following is the planetary representation in case you don’t understand symbols:

This will allow us to divide the whole day in two parts day / night and let us know that which planet is dominant at which time in the space. Take Earth as a reference and calculate the astronomical distance of each planet consider that our solar system in irregularly round, the exact order of distance from the earth would be as follows:

MOON – 38,4400 KM MERCURY-107.73 MILLION KM VENUS-177.93 MILLION KM SUN – 149.04 MILLION KM MARS-64.797 MILLION KM JUPITER – 766.8 MILLION KM SATURN – 1.433 BILLION KM Now, the planet considered first in the order are called as Endo-planets (Earth to Sun) and Mars to Saturn are Exoplanets as it is away from the sun then the Earth. Moreover, Sun, Mercury, moon and Venus as seen in astrological charts forming often combination (Yuti) in the same house and exoplanets use to form aspects in relation with sun frequently. This understanding reveals that Endo-planets has a natural ability to cast a shadow on the earth as they are in-between Sun and the Earth, whereas exoplanets like Mars, Jupiter and Saturn has an ability natural ability to protect earth from galaxy debris.
As per Practical Astrology by Samael Aun Weor following is the correct order or weekdays:

After knowing this I am researching for the original order of Weekdays (Vāsara/Vaar) as per Vedic/Hindu calendar. But unable to find any reliable source.

Most of the source that I am stating here from the Internet are as follows but could not find any ancient literature source to support the above hypothesis.

As per Wikipedia (which may be biased) the concept of weekdays was introduced by Christian Catholic and that is borrowed by Hindus and this was the (Lunar) calendar that was being used from Vikramaditya era around 57 BCE. Is this true? If not, then what is the original weekdays order as per Hindu traditions? If anyone can point me to any reliable literature (hopefully not affected by visiting missionaries) regarding this that could be a great help.

One theory is that Weekday names and order was introduced by Varāhamihir (who was in Vikramaditya’s era and a member of his court) in India and possibly he agreed to put in Indian literature based on trusting research from visiting Christian Catholic missionaries.. I deduce this based on information from Wikipedia about active period of varahmihir and aryhabhatt and arrival period of Christian catholics in India. This could be done in innocence by Varahmihir or Aryabhatt as India was more attuned to following 15 or 30 Moon days calendar. And this change would have had least impact. Only in last 200-300 years we are extensively using weekdays in daily lives (including fasting etc).

Again, I don’t know if this is correct or not. All help regarding this is greatly appreciated.

I quote from Wikipedia regarding seven days week under Hindu Astrology:

It was only after the transmission of Hellenistic astrology that theorder of planets in India was fixed in that of the seven-day week.

The Romaka Siddhanta ("Doctrine of the Romans") and the Paulisa Siddhanta were two works of Western origin which influenced Varahamihira's thought.

If we look further in past there is Maharshi Bhrigu (who is believed to be a Saptarishi) who is said to have compiled Bhrigu Samhita which again is said to be first ever Astrological compilations in probably Dvapara Yug, that is before Kali Yug. But at that time was there any concept of week? If Yes, then what was the order of weekdays names?

Some URLs for reference: https://en.wikipedia.org/wiki/Week

This possibly comes from Dr Rudolf Steiner, who has a sequence of: Moon, Mercury, Venus, Sun, Mars, Jupiter, Saturn as we return from death in this life towards a new birth. The sequence matches Samael Aun Weor's days of the week.

Reset to default
0
Want to improve this post? Add citations from reputable sources by editing the post. Posts with unsourced content may be edited or deleted.

Doesn't look like importance of Guru disciple system has much importance these days. Mother nature has given internet and took away that responsibility in her own hands literally. As evident system is already on decline after arrival of satyug aquarius age in 1960s. Remember Guru is considered as Mother and father both but Mother is first Guru. And when mother decides to take role of Guru, she will decide how to impart knowledge. Mother nature is ultimate Guru by way of deploying law of karma she is teaching to humanity moment by moment how to live our lives. Not to be disrespectful to Guru disciple system but reality is next 1000 years (before big reset) will be relationship between mother and child. Every human will look within to awaken his own guru by direct help from mother nature (at personal front, it is individuals kundalini) as he she learns to navigate without competent guru (in physical form). And jyotish Vidya Will not remain unaffected by this. Some interesting excerpts from book of vimalananda (Aghora series) .. jyotish Vidya mathematically can only be 50% correct. Rest 50% perfection comes from relationship between practicing jyotish and his or her diety. Why ? Because continuous friction between will power and fate. World is running because of this friction between fate and will power. When sincere selfless jyotish working only for interest of others with full trust on diety declares something without iota of ego or self praise, he or she will be honored. Anyone with ballooned ego with over confident on his or her so called mathematics will not be honored. So 50% from math and rest 50% from devotion and following your sadhana for your deity. As far as order of planets are considered, moon is first because moon is mind and moon is mother. Moon didn't separate from us. We separated from her. And still she circles us like a good mother always keeps checking on her children. Similarly sun is in center because it's a center where super ego resides .. minimum requirement to be soul. Our personal ego is our gravity holding us into the body. Without this individual body dies in physical form as soul will go to higher realms of gravity. Only way to die and still remain in body is by way of divine laws of karmas where diety allows individual to remain in body to play out game of karma. This is very difficult to stay ibody after merger of kundalini and Shiva in sahasrar chakra. Shani (Saturn) is last in order is agreeable in all religions. So it is quite clear that OP is making sense. Will read more about it and come back. But saying that you can't learn without physical competent Guru is not going to hold up for rest of 1000 years as mother nature is fully taking charge and internet is ultimate truth for that. Teaching humanity how to utilize jyothish principles for betterment out of compassion for others without bloating ego will be key for this millennium.

Citations:- 1. Invention of internet. Nother source of all knowledge for entire humanity regardless of any background. 2. Aghora series from dr. Robert svoboda/vimalananda 3. Practical astrology by Samael Aun Weird. 4. NASA website with information on planetary rotation speed and for distance between planets.

11
What is the concept of a week in Hinduism?

3
In jyotish (vedic astrology), how is a sign (rasi) ruled by a planet (graha)
10
How many kilometers equals to a Yojana
5
Why called Navagraha?
3
How is bodily complexion determined from the horoscope of the native?
5
Bhairavas and Navagraha
5
What correspondences of Grahas to different Mahavidyas are correct?
5
Do ancient astrology books say to wear gemstones to increase the effects of planets?