What are the roots of the Caste System in India?

As per what I have read and learnt, In the Purusha Suktam of the Yajur Veda the following lines appear:

(asya) His (mukham) mouth (Aseet) became (brAhmaNa:)the Brahmin, (bAhoo) his arms (krta:) were made (rAjanya:) Kings. (yad) what were (asya ooru) his thighs, (tad) they weremade into (vaishya:) the merchants, (padbhyAm) and from his feet (shoodro) were the servants (ajAyata) born.

Can someone give me a better source for the reality of the caste system in India? Were the castes to be only associated with the professions of the individual or were they to be carried forth as a heritage with the lineage?

Edits to factor in my opinion on naming of the castes, which have off late taken up a myopic, perverse and prejudiced meaning:

Though I do not concur with the usage of the words "Brahmin", "Kings", "Merchants" and "Servants", I have pasted it as it was from my source. I prefer using the words "Margadarshi","Rakhshak","Sanchaalak" and "Paripaalak".

The following verse (Sanskrit: Sloka) from Srimad Bhagvad-Gita (Chapter 4 - Sloka 13) is most authentic and adequate reference to be quoted

English Transliteration of each syllable with meaning:

The four categories of occupations were created by me according to people’s qualities and activities. Although I am the creator of this system, know me to be the non-doer and eternal.

After quoting above...let me summarize on both of these words (varna and jati)...and their correct interpretation.

Varna - indicative of set of personality traits, and skills and competencies - which also shapes - what would be the ideal role, responsibilities, and possible contribution(s) of an individual as the small unit in the society.

So there are 4 varnas:

So what is Jati?

It's an indicative of "what skill set, an individual possess to earn their livelihood to sustain themselves and their family.

Please note that these varnas do NOT have any hierarchy - among themselves. Therefore, I try to company two different varnas - and try to proof or evaluate which is better than other - then basically what I am trying to do is - "to compare an apple with orange"! Which itself is illogical.

This is a prayer to make ALL HUMANS Aryas. Veda makes a distinction between Shudra & Arya meaning bad people and noble people. Of course, birth is as per karma but this is a very clear message from the Veda itself that Varna can be changed! Now if we see Upanishads or Brahmanas we almost always get the same picture. Look at Chandogya Upanishad talks about the initiation story of another Upanishad's author:

Gautama asked him, ‘O Somya, what is your lineage?’ Satyakāma said: ‘Sir, I do not know what my lineage is. When I asked my mother, she said to me: “I was very busy serving many people when I was young, and I had you. As this was the situation, I know nothing about your lineage. My name is Jabālā, and your name is Satyakāma.” So, sir, I am Satyakāma Jābāla’. Gautama said to him: ‘No non-brāhmin could speak like this.

So the son of a highly impure shudra woman and unknown man was declared Brahmin. Now look at the story of Vedic author Vatsa found in Tandya Brahmana 14.6.6, Jaiminiya Brahmana 3.234:

So there was clear misconception and human nature at work here. But Agni preferred Shudra's son. Shudra's son was a superior Brahmin compared to birth-Brahmin. Another example from the Brahmanas is in Kausitaki Brāhmana 12.3 and Aitareya Brāhmana 8.19

"You are the son of a female slave. We will not eat with you" (dāsya vai tvam putro si na vayam tvaya saha bhaksayisyama iti). Kavasa became angry and ran away. He recited a hymn of praise to Sarasvati, who then followed after him: sarasvatim etena suktena tustava tam heyam iyaya. Realizing what had happened, the surprised seers hurried to him to express their reverence: "0 seer, homage be to you. Do not harm us. You indeed are the best of us...

Again we find human nature and misconception in this story. But Saraswati considers a Shudra's son superior to all birth-Brahmins combined at being a Brahmin. The birth-Brahmins also later accept they are inferior to him. He authored a part of Rig Veda. There are 108 canonical Upanishads as per Muktika Upanishad. One of them is Vajrasuchika Upanishad which says

Self-explanatory but people still try to twist and discard Vedic scripture because of human nature or misconception from semi-sacred Smritis. People who consider smriti main scripture are called Smartas and they are biggest caste lover. But most Hindus and all other Hindu scripture does not accept this absolutist view.

Varna comes from Vrina dhatu which means "choice". The other words from this root are Varan or to choose; Swayamvar; Aavaran or to cover self; Varnan or to describe.

Varna signifies our choice to perform karma in quest to reach Brahma.

Varna's translation to Caste or Color is incorrect, likely used by European translators to cast racist connotations to this fundamental system.

Varnas are inside us. Each of us has a Brahmin and Kshatriya (and other Varnas) inside us. We can't be clubbed into an exclusive "varna" group and say we'd only do Kshatriya karma or vaishya.

Karma defines our Varna, and nothing else. This karma is likely the majority kind of work we do, but it can change with time. Eg, Ram was a Kshatriya by diksha but he attained Kshatriya varna by doing primarily Kshatriya karma for whole life (not that he didn't do tap or yagya). Similarly, Vishwamitra was Kshatriya by his diksha and karma in his early part of life, but he became a brahmin by his karma in later part of life. 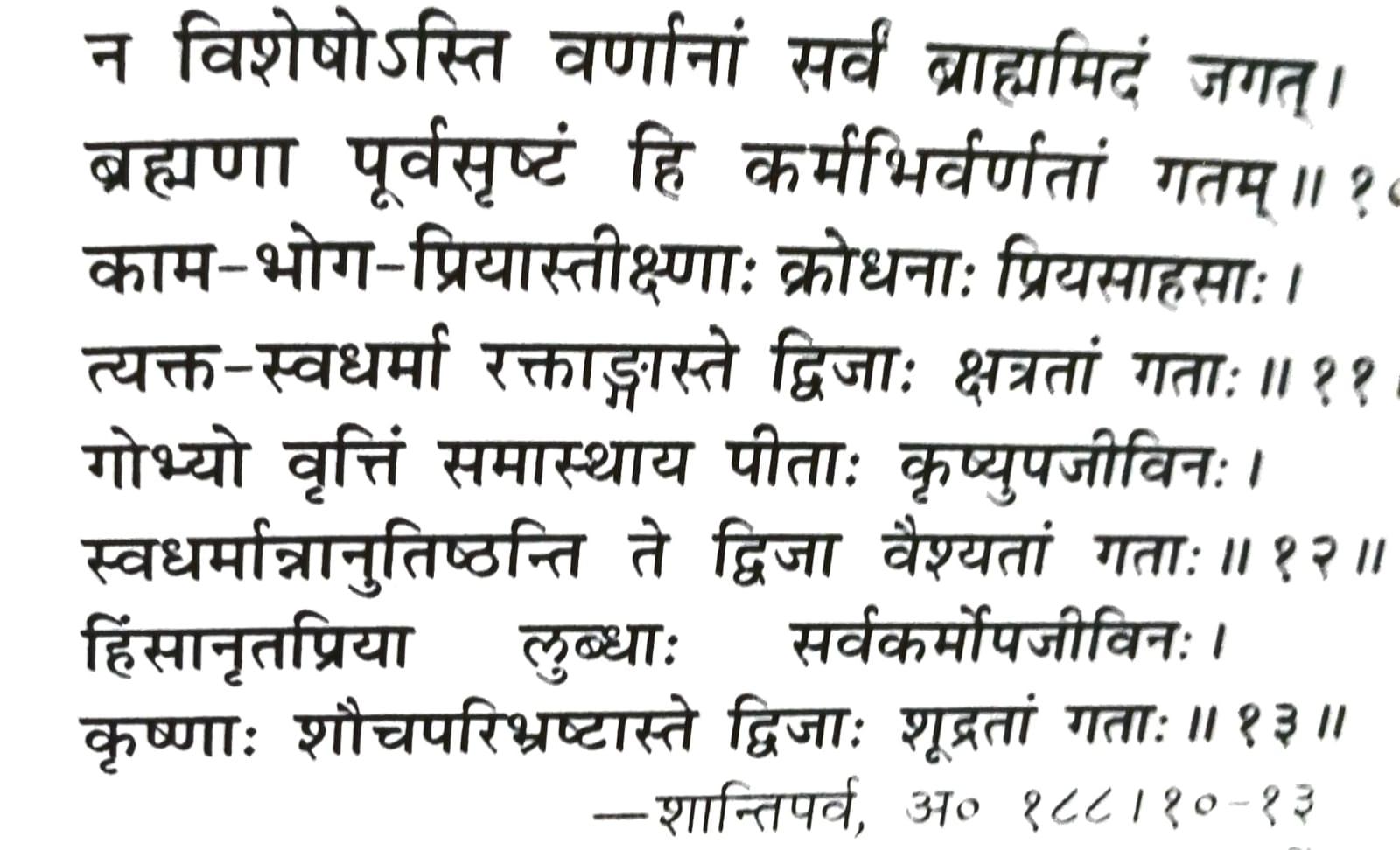 Not the answer you're looking for? Browse other questions tagged history caste-system varna varnashrama .

4
Are Varna and Caste same or different?

6
What caste are foreigners?
15
What are the counter-arguments within Hinduism(scriptures) against the Birth based Varna and Caste system?
5
Did Krishna ever talk beyond the four caste system?
3
Are there complaints in the scriptures about the iniquties of the caste system?
5
Does ISKCON advocate birth-based caste-system or guṇa-based? And on what basis?
2
Caste System in Vedas
2
What Advaita tells about Mlechha, Caste system, Varna Sanskara?