Scriptural reference for the fact that Prabhu is fully present in His Name itself. He has put all His powers in His Name

On Internet, I came across this text today(highlighted portion). 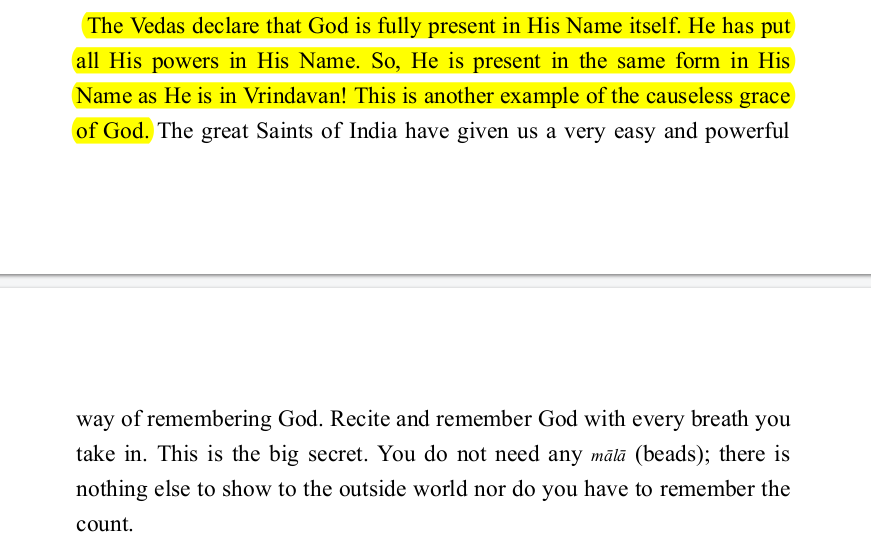 In case the picture is not loading, here is the text which is written in the image

Can someone kindly provide some scriptural references? I would be thankful.

Of the great rishis I am Bhrigu, and of words I am the monosyllable "Om." Of sacrifices I am the sacrifice of japa; of immovable things I am the Himalaya.

And Patanjali says in his Yoga Sutras I.27-28 (Swami Vivekananda translator):

Well, it is very obvious that the sentence is from an ISKCON website. The language and wording is so typical of them.

If you're looking for scriptural references for those words exactly, you may not find any.

But there are equivalent statements praising the name as a way of meditating on the deity.

The sages protect the state of the Truth, they carry the highest secret names.

We say the name of the Ghrtam, we worship (or meditate on) it with obeisances.

Those famous names of the Great Soul which bring out His manifold qualities celebrated by rishs (seers) I shall declare for the good (of all).

with the above we infer that Names describes Gods qualities or Gunas. Now Chandyogya upanishad says

Lords Name = Lord himself By logic one can infer from the above.

Whoever contemplates ‘name’ as Brahman, which means to say, whoever regards the object of meditation as absolute, gains whatever that object includes within its gamut. The principle of meditation is this: whatever the object of your meditation be, that has to be taken as absolute. There should not be anything external to it, because if the mind conceives something higher than that particular object, then that higher thing becomes the object of meditation. The point is that the object that you have chosen for your meditation should be the last point of the reach of your mind, beyond which it cannot go. Then it becomes the absolute. So this absolute is only a name that we give to the best possible reach of the mind in any level or degree of experience. ‘Name is Brahman’—this means name is the absolute, inasmuch as we are in a realm of names only. Why should we not take the higher degree as the absolute, and not the lower one? Because the higher one cannot be the content of the mind in its present state. Suppose we are asked to meditate on the heavenly regions. We cannot, because we do not know what it means. The heavenly regions are beyond the reach of the mind. We will only superimpose physical pictures of our imagination on paradise, Brahma-loka, etc. This is not what is intended. We must limit ourselves to the extent of our knowledge, and complete the meditation regarding that particular object as absolute in itself. So, Narada was asked to take ‘name’ as the absolute. The result of this meditation on name is that to the extent name goes—to the extent of the reach of the mind theoretically, conceptually—to that extent, the meditator will be free.

Not the answer you're looking for? Browse other questions tagged scripture practice book-recommendation .

4
Scriptural source for the Subhāṣita that says 'treat others' wives as your mother'
6
Scriptural reference for the story of a sage, hunter and a wild animal?
4
In which scripture, does Sage Narada ask for the boon that Lord Rama's name be the superior of all names?
9
Is there any scriptural reference that women should take bath before preparing the food?
3
Resources to Astronomical references in Hinduism
11
Why does Sage Bhrigu have an extra eye on his foot?
7
The Four Curses and a Boon by Devī Sītā