4 of 12 Jyotirlinga are in Maharashtra ; please confirm?

Hello. am confused with some maps showing Vaidyanath to be located in Parli, Maharashtra and some in Deogarh, Jharkhand. Any literary proof to confirm truth?

Chapter 1 of the Koṭirudra Saṃhitā of the Shiva Purana places the Linga in a cremation ground or citābhūmi (and alternatively at a place called parali):

The Dvādaśaliṅgastōtram by Adi Shankaracharya places the Linga in the North Eastern part of the country:

This indicates that the Linga is situated in the North east alongwith Devi Parvati, an indication to a śaktipīṭha in the vicinity, just like Mallikarjuna.

Accordingly based on the above, we can conclude that the Vaidyanātha Jyōtirliṅga is located in the North eastern part of the country near a śaktipīṭha,

The Vaidyanaatha of Deoghar Jharkhand, has a śaktipīṭha facing the Jyotirlinga temple and the place is claimed to be known as chitabhumi in common parlance. There are only 4 śaktipīṭhas in modern day Maharashtra and Parli doesn’t feature in that list.

Deoghar Jharkhand being roughly in the north eastern part of the country and also near a famous śaktipīṭha is the correct Vaidyanātha Jyōtirliṅga. 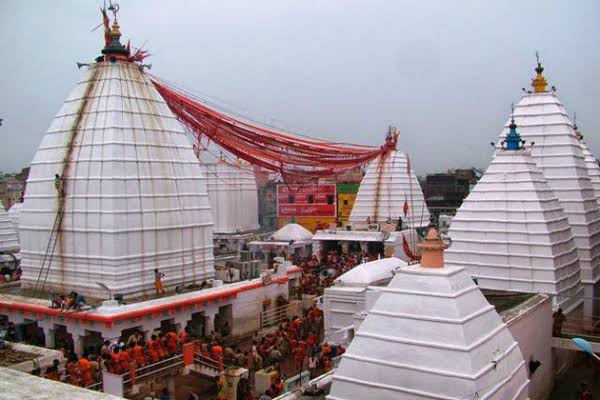 The Jyotirlinga temple and Shakti pitha at Deoghar Jharkhand, connected to each other by red threads.

Note: There’s an alternate version of the Dvādaśaliṅgastōtram where cremation ground is replaced with parali and sadavasantam is replaced with sadashivam. Yet the basic north east and alongwith Devi Parvati is retained. No doubt Parli has its significance, yet it is not the jyotirlinga spoken off in scriptures.

8
Which one is a Jyotirlinga "Omkareshwar" or "Mamleshwar"