Does Devi bhagavatam contain interpolations? Did anyone write a commentary on it?

It does. Imo every Purana contain atleast some interpolations.

"O King! When Mahādeva, being infatuated with Kāma, went into the forest of Bhṛgu and becoming naked, began to copulate, the ascetic Bhṛgu, seeing him in that state, exclaimed “O You are very shameless” and cursed Him thus :-- Let your penis drop off just now. Mahādeva, then to satisfy his thirst for passion, began to drink the water of the lake Amrita Vapī, dug by the Dānavas."

"To preserve My Commandments, I have created the Brāhmaṇa and the Kṣattriya castes. My secrets are all embodied in the Śrutis. For that reason, the words of the Śrutis are no doubt to be known and observed by the sages. O Mountain! When the Dharma (righteousness) declines and the Adharma (unrighteousness) reigns supreme, I then manifest Myself in the world as Sākambharī, Rāma, Kṛṣṇa and others. Therefore, the Devas, the preservers of the Vedas, and the Daityas, the destroyers of the Vedas are classified. Whoever does not practise according to the Vedas I have created many hells for their lessons. When the sinners hear of those hells, they get extremely terrified. The king should banish those stupid persons from his kingdom and the Brāhmins should not talk with them nor take them in their own lines nor when partaking of food, those who forsake the Vaidic Dharma and go for shelter to another Dharma. The Śāstras that are extant, as contrary to the Śrutis and Smritis, are all Tāmasa Śāstras, Mahādeva has framed these Vāma, Kāpālak, Kaulaks, Bhairava and such like Śastras for fascinating the people; else he has no object in framing them. Those Brāhmaṇs that were burnt up by the curses of Dakṣa, Śukra, Dadhīci and were banished from the path of the Vedas, it is for delivering them, step by step that Mahādeva has framed the five Āgamas, Śaiva, Vaiṣṇava, Śaura, Śātta and Gānapatya Śāstras." 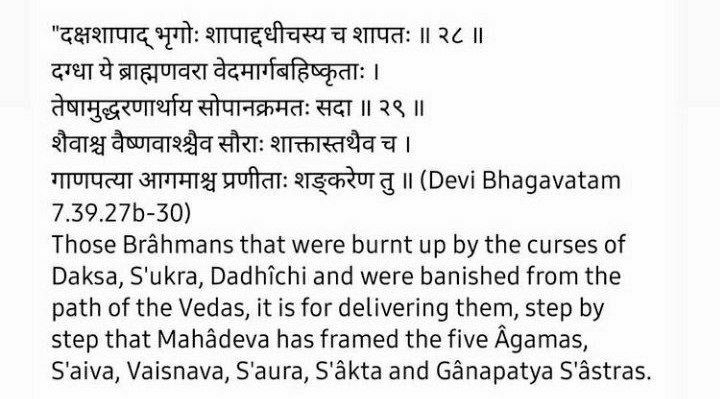 I noticed these only. I think this is done by someone who has misunderstandings about agamas and was biased towards vedas.

Not the answer you're looking for? Browse other questions tagged devi-bhagavata-purana interpolation commentary .