No rebirth with Ramana's touch

Ramana maharashi is a Jivan muktha of recent times. In this video, he is touching kids, animals etc.,

Did Ramana maharshi ever say that there will be no rebirth to all living beings touched by him?

If yes, does it valid for all jivan mukthas?

moksha rebirth ramana-maharshi
Share
Improve this question
asked May 20 at 23:33

:) An enlightened being cannot prevent or accentuate the spiritual progress of any other being unless that individual (being) is receptive and is also in a fairly advanced stage of evolution. Shaktipaat can work but it cannot be forced onto an individual who is not willing. It is pretty similar to how Sri Krishna had no effect on Duryodhana (who was closed) despite the latter meeting him many times whereas the same Krishna had a phenomenal effect on Arjuna (who was open). As a rule, Realized / Enlightened beings don't interfere with the karma of any other being without the latter's complete willingness.

Ananda was a cousin of the Buddha and a disciple too. But he had a condition* that he always remain like a shadow to Buddha, never leaving his physical presence, which Buddha agreed. This para below explains why Ananada could not attain enlightenment despite being in utter close proximity with the Buddha. I quote this:

Ananda destroyed his possibility by just one condition*. He missed it all. When Gautama was on his deathbed, only the enlightened disciples went inside. All the others were left outside. Ananda cried and said, “I was so close to him but I am left out of his circle, why? Why did it not happen to me?” When people asked the same question to Gautama, he said, “How can a spoon taste the soup?” If you want to taste the soup, you need that awareness of the tongue. The moment you set conditions in life, you become inanimate. You get reduced to a thing and you try to reduce the other thing. But that other thing is away from you. That was the unfortunate thing with Ananda.

So in the case of Ramana Maharishi, he touched those animals because they were pretty evolved (ref excerpt 2), and close to the levels of human consciousness especially the cow (ref excerpt 1) and hence it was possible for him to elevate them further more and destroy the remnants of Karmic memory thereby liberating them.

In summary - elevation of consciousness is what brings about liberation and in turn all it means is about destroying one's vasanas and abiding in their own Self. 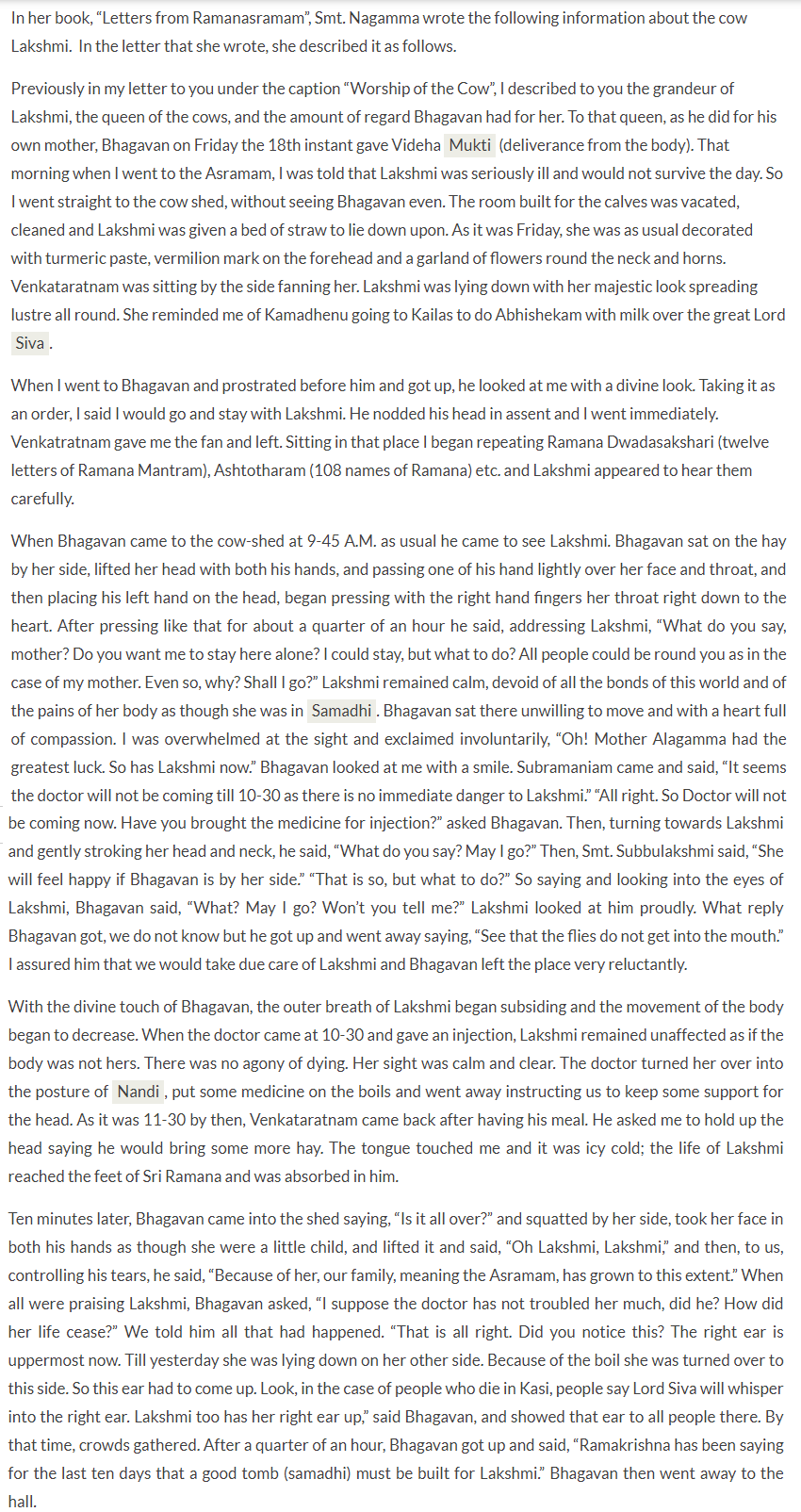 Not the answer you're looking for? Browse other questions tagged moksha rebirth ramana-maharshi .

23
Does rebirth or reincarnation occur in Hinduism?
6
Rebirth Pertaining to Religion
6
Does Karma (going from a higher life-form to a lower one) only apply to humans?
5
Does Kumarila Bhatta say you're always reborn as the same species?
2
Why is rebirth considered as a curse?
3
What actually transfers during rebirth?
1
Are all worlds and existences except God temporary in Hinduism?
6
Why is Ramana Maharshi referred with the title of "Bhagwaan"?