Why was the Samudra Manthan performed?

There was a mention of "Samudra Manthan" (the churning of the ocean) in Hindu mythology. Why was it performed? Please also mention the items which resulted from the churning, with a small explanation for each.

Active Oldest Votes
12
Want to improve this post? Add citations from reputable sources by editing the post. Posts with unsourced content may be edited or deleted.

As goes with any Hindu myth, the culprit of the entire mayhem was Lord Indra.

Once upon a time Indra who was riding his elephant came across Durvasa Rishi, who gifted him a garland of flower. Indra, who absent mindedly instead of keeping the garland himself, put it on the elephant.

Since the garland was made of flowers, insects and bees started to get attracted by it, which provoked the Elephant who threw the garland into the floor and stomped it.

On knowing this, Durvasa was furious (because apparently, the garland was a dwelling of fortune and should have been treated with care and treated as prasadam) and went on to curse all the devas and made them dovoid of any strength, vigor and fortune.

The the Asuras knowing the ill fortune of devas captured all three lokas. Devas went to Lord Vishnu for his advice who asked them to get the Amrita (अमृत) from under the vast ocean kṣīrasāgara (क्षिर्-सगर) by Samudramanthan समुद्रमन्थन् . Devas alone weren't capable to do such a Herculean task and they needed the help of Asuras in doing so.

Asuras being naive agreed to this and they agreed to distribute the things which emerge from the sea equally among each other. Vasuki (वसुकि), King of Serpents was made the churning rope, and Mount Mandar (मन्दार) was made the spindle. 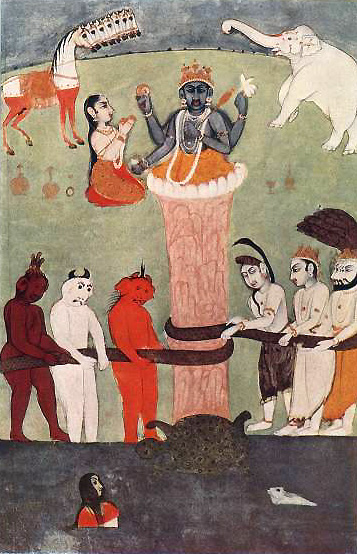 Asuras were made to hold the head of Vasuki while the Devas held on to the tail part, and hence the great churning started. During churning, Mount Mandar became unstable and was going under the sea bed. Vishnu took Kurma-Avatar (कूर्मावतारम्) (Vishnu in Tortoise avatar) and went under mount Mandar mountain to support it.

The following things came from the churning of sea,

During fight between Devas and Asuras for obtaining Amritam, a few drops fell on earth at Ujjain, Nasik, Allahabad, and Haridwar. The drops are said to have purified the land and it is here that every year devotees come to wash away their sins in the famous assembly called Kumbh Mela.

Why was samudra manthan performed?

There is a story of Durvasa's curse in Padma Purana which lead to the churning of ocean.

4-6a. At that time he saw Śacī’s lord (i.e. Indra) mounted on the elephant (called Airāvata). Seeing a garland of Pārijāta (flowers) the great sage gave it to him (i.e. to Indra). O brāhmaṇa, Indra, the lord of gods, taking that garland, and putting it on the head of the elephant went with his army to Nandana (garden). The elephant seizing that garland, cut it off and hurled it on the ground.

Then Lord Vishnu suggested churniyof ocean as solution of this curse.

The lord said: 19b-23. O gods, Indirā (i.e. Lakṣmī), due to whose mere glance the world is endowed with glory, has vanished due to the curse of the brāhmaṇa (viz. Durvāsas). Then, O gods, all of you, along with the demons, having uprooted the golden mountain Mandara and making it, with the king of serpents going round it, the churning-rod, churn the milky ocean. O gods, from it Lakṣmī, the mother of the world will spring up. O glorious ones, there is no doubt that because of her you will be delighted. I myself, in the form of a tortoise, shall fully hold the (Mandara) mountain (on my back).

Saying so, that lord Viṣṇu disappeared. O brāhmaṇa, all the gods and demons went for churning the ocean

Another story is defined in Skanda Purana according to which Indra insulted Brihaspati which resulted as the defeat of devas in war. All the jewels of devas like Airavat, Uccaiḥśravas were looted by Asuras but they fell in ocean.

9-10. At the very same time, Śakra, the lord of Devas, was informed by Nārada: “The preceptor has been insulted by you. There is no doubt about it. O slayer of Bala, your kingdom has gone due to the disrespect (shown by you) to the preceptor. Hence, by all means, you have to plead to him for forgiveness.”

13-15. Thereupon, Śakra became worried and returned to his own house. In the meantime, there appeared mysterious ill-omens in heaven, causing misery to everyone including the noble-minded Śakra himself.

All the activities of Śakra were known to Bali who was stationed in the nether worlds. Surrounded by Daityas, he went from Pātāla to Amarāvatī. Thereupon a great fight ensued between Devas and Dānavas.

16-18. Devas were defeated by Daityas. Instantaneously the whole of the kingdom of Śakra, the deluded and evil-minded one, was conquered by them and everything (belonging to Śakra) was quickly carried to Pātāla. It was by the grace of Śukra that all of them became victorious. Śakra became bereft of glory and splendour. So he was utterly abandoned by Devas. The goddess (of fortune) with lotus-like eyes vanished.

Sukracharya told them that one could attain pleasures of heaven only after doing 100 ahwamedha.

Then devas on advice of Vishnu asked Bali (king of asuras) for ocean's churning.

61-63. Then an ethereal voice with the majestic rumbling sound of cloud said: “O Devas, O Daityas, do churn the Ocean of Milk. There is no doubt about this that your strength will increase. Make the Mandara mountain the churning rod and Vāsuki the requisite rope. Afterwards, O Devas and Daityas, join together and let the ocean be churned.”

On the other hand, Astika Parva gives an other story.

"Saunaka asked, 'Why did the gods churn the Ocean for nectar, and under what circumstances and when as you say, did that best of steeds so powerful and resplendent spring?'

"Sauti said, 'There is a mountain named Meru, of blazing appearance, and looking like a heap of effulgence. The rays of the Sun falling on its peaks of golden lustre are dispersed by them. Decked with gold and exceedingly beautiful, that mountain is the haunt of the gods and the Gandharvas. It is immeasurable and unapproachable by men of manifold sins. Dreadful beasts of prey wander over its breasts, and it is illuminated by many divine life-giving herbs. It stands kissing the heavens by its height and is the first of mountains. Ordinary people cannot even think of ascending it. It is graced with trees and streams, and resounds with the charming melody of winged choirs.

Once the celestials sat on its begemmed peak—in conclave. They who had practised penances and observed excellent vows for amrita now seemed to be eager seekers alter amrita (celestial ambrosia). Seeing the celestial assembly in anxious mood Nara-yana said to Brahman,

'Do you churn the Ocean with the gods and the Asuras. By doing so, amrita will be obtained as also all drugs and gems.

O you gods, chum the Ocean, you will discover amrita.'"

Please also mention the items which resulted from the churning, with a small explanation for each.

2-7a. Then the glorious, kind, ancient lord of the world supported on his back the bottom of the mountain. (Then the gods) putting Ananta (the lord of serpents) round it churned the milky ocean. When it was being churned on the Ekādaśī day, all of them ran away seeing the Kālakūṭa poison that had come up.

7b-22. He who, being controlled, would devoutly mutter the three names, viz. Acyuta, Ananta, and Govinda, of Viṣṇu with Praṇava (i.e. Om) at the beginning and Om at the end, has no fear of taking poison, or from fire and also from death. Then gods with their minds delighted, churned the milky ocean. Then Alakṣmī (i.e. Evil Fortune), of a dark face and red eyes, having rough and tawny hair, and having an old body, sprang up.

1-4. Then Airāvata sprang up (from the ocean), so also the horse Uccaiḥśravas. Then (sprang up) Dhanvantari, and the fragrant Pārijāta. So also there was the rise of the celestial nymphs. Then on the twelfth day in the morning, when the sun had risen, the great Lakṣmī, graced with all (auspicious) characteristics, sprang up. All the religious deities saw that great mother of all creatures having her abode in the heart of Viṣṇu, and were delighted. Then, the cool-rayed one (i.e. the Moon), the brother of Lakṣmī, sprang up with nectar. (So also) Tulasī, Viṣṇu’s wife, purifying the world, came up.

Not the answer you're looking for? Browse other questions tagged puranas samudra-manthan .

3
What is Samudra-manthan?
1
What is the story of Amruth Manthan?

10
Samudra Manthan and the role of Alcohol - Suras, Asuras and Varuni
17
Why did Shiva not swallow the poison arising from Samudra Manthan?
4
Is there any description available of Kalpavriksh?
15
Did the Churning of the Ocean happen again in the Vaivasvata Manvantara?
5
Why is the poison that came out of Samudra Manthana called Halahalam and Kaalakootam?
13
Why did Goddess Lakshmi choose Lord Vishnu as her consort?
3
Is Avatar of Mohini a sign of support for homosexuality?
4
Kshirasagara (the Ocean of Milk) where it comes from?